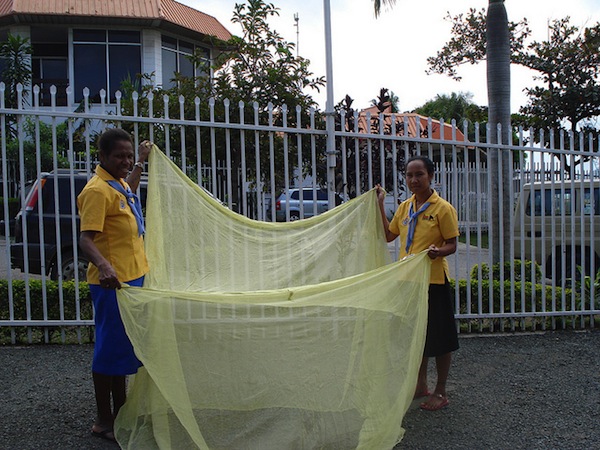 Rotarians Against Malaria display one of the insecticide treated mosquito nets being used throughout Papua New Guinea. Credit: Catherine Wilson/IPS

WASHINGTON, Dec 11 2013 (IPS) - Enhanced efforts to fight malaria have saved an estimated 3.3 million lives and nearly halved the disease’s global mortality rate since 2000, according to the latest edition of the World Health Organisation’s (WHO) annual “World Malaria Report”, released Wednesday.

But much more needs to be done to eliminate the disease, which last year killed an estimated 627,000 people worldwide, about 483,000 of whom were children under the age of five. That pace averages one malaria-caused child death almost every minute, according to the 253-page report.

Prevention and control measures by multilateral organisations, national governments, private foundations, business and civil society organisations over the past dozen years have been particularly effective in sub-Saharan Africa, which, along with South Asia, has suffered most from the mosquito-borne illness, the report said.

While malaria mortality rates fell by 45 percent worldwide since 2000, the percentage in Africa was 49 percent and 54 percent among African children under five. Similarly, while malaria infections fell by 29 percent globally, infections in Africa, where about 80 percent of malaria cases are found, were reduced by 31 percent, according to the report.

“The remarkable gains against malaria are still fragile,” Robert Newman, who directs WHO’s Global Malaria Programme, told reporters at the report’s release. Several countries over the past 75 years have come close to eliminating the disease only to see it resurge due to complacency and reductions in funding. “A 50 percent reduction is great, but we can’t get to the endgame with that.”

"The greatest threat to continued success in malaria efforts is financial."
-- Robert Newman

“In the next 10-15 years, the world will need innovative tools and technologies, as well as new strategic approaches to sustain and accelerate progress,” he emphasised. “The greatest threat to continued success in malaria efforts is financial: we have less than half of the 5.1 billion dollars needed annually to ensure universal access to life-saving interventions.”

Last year’s toll of malaria deaths might have been fallen even more if funds had been available to procure insecticide-treated bed nets, a major prevention measure, in malaria-endemic countries. But, for the second year in a row, bottlenecks caused by insufficient funding resulted in the delivery of only 70 million new bed nets, far below the 150 million annual target.

In 2013, however, that problem appears to have been overcome, as 136 million nets were delivered, and WHO officials are predicting that some 200 million more will be delivered in 2014.

“We are going to see a much more rapid procurement process,” said Joy Phumaphi, executive secretary of the African Leaders Malaria Alliance, a group that includes 39 African heads of state and a former vice president of the World Bank’s Human Development Network.

Due to a recent restructuring of the Global Fund to Fight AIDS, Tuberculosis and Malaria, she said, the time between fund allocation and actual delivery of nets has fallen from 18-24 months to three months. “This is an example of the new efficiencies that have come with the restructuring” of the Fund, she said.

The Fund, a multilateral agency that is by far the most important single source of funds for anti-malaria projects, received a boost earlier this month when donor countries pledged a record 12 billion dollars to its fourth replenishment, which will take it through 2016.

While that total fell short of the 15-billion-dollar goal that the Fund set for itself, it marked a three-billion-dollar increase from its third replenishment in 2009.

That amount should help the global anti-malaria effort come close to the goal of reducing malaria mortality rates for children under five by 75 percent from 2000 levels. The WHO report estimated that if the annual rate of decrease that has occurred over the past 12 years is maintained through 2014, then mortality rates should decrease by 56 percent in all ages and 63 percent for children under five.

Currently 59 countries are on track to meet the 75 percent goal, but they account for only four percent of total estimated malaria cases. That goal will be much harder to reach in the 18 most-affected countries, which include 17 African nations and India. Two African countries – Nigeria and the Democratic Republic of the Congo, whose sheer size makes it difficult to track malaria cases – account for fully 40 percent of all malaria deaths worldwide.

“We can reach 75 percent, but it’s going to take efforts by all of us,” said Newman.

“The vote of confidence shown by donors last week at the replenishment conference for the Global Fund is testimony to the success of the global partnership,” said Fatoumata Nafo-Traore, executive director of the Roll Back campaign. “But we must fill the annual gap of 2.6 billion dollars to achieve universal coverage and prevent malaria deaths. This is our historic opportunity to defeat malaria.”

In addition to the distribution of bed nets, the most effective interventions now in use include indoor residual spraying (IRS), diagnostic testing, and artemisinin-based combinations therapies (ACTS), which are recommended as the first-line treatment for the most deadly form of malaria.

The proportion of the at-risk population in sub-Saharan Africa sleeping under a bed net in 2013 was 36 percent in 2013, according to the report, which cited studies showing that 86 percent of the population with access to a net actually used it.

IRSs were much less prevalent, accounting for only eight percent of the at-risk population. Mosquito resistance to at least one insecticide used for malaria control has been identified in 64 countries worldwide and represents a major challenge in the anti-malaria fight.

Meanwhile, diagnostic testing to determine whether a patient who shows symptoms of malaria actually has the disease and is treated accordingly and ACTS have been increasing rapidly. In 2012, 331 million ACT courses were procured by public and private facilities in endemic countries – up from only 11 million in 2005.

In addition to ensuring increasing access to these tools, Newman stressed the need for improving surveillance and monitoring systems in most-affected countries. Much more funding is also needed for research and development (R&D) of new insecticides and drugs to overcome resistance to existing products by mosquitoes and the parasite itself.

He also noted the importance of R&D into malaria vaccines, one of which – RTS,S – was shown to almost halve the number of malaria cases in young children (aged 5-17 months at first vaccination) and to reduce the number of cases by about a quarter in infants in late-stage trials in Africa announced in October.