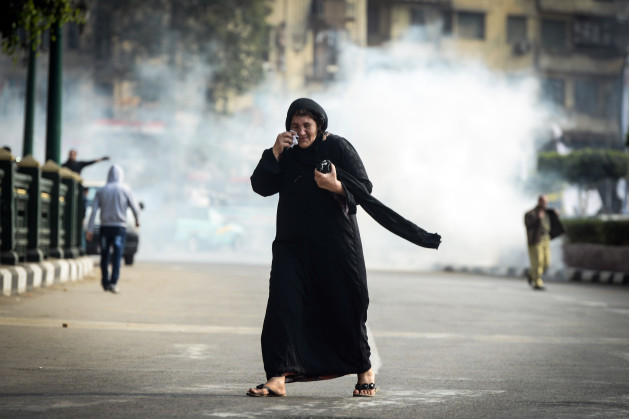 A woman steps away from tear gas during a riot in Cairo. Credit: Hisham Allam/IPS.

CAIRO, Dec 1 2013 (IPS) - “Subsidies from the Arab world are large and reflect Arabs’ love towards the Egyptian people, but we cannot depend on that to build an economy that can compete with other countries,” said economist Dr Alia el Mahdi.

She was explaining the economic situation in Egypt after the current government made repeated requests for financial assistance from Gulf countries.

“Our dependence on them should not exceed temporary assistance, and it should not become the mainstay of the national economy, just to gain a better international credit rating,” she added.

The credit rating agency Standard & Poor’s raised its long- and short-term foreign and local currency sovereign credit ratings for Egypt on Nov. 15, from “CCC+/C” to “B-/B” with a “stable” rating outlook.

In his short trip to the United Arab Emirates last October, Egyptian Prime Minister Hazem el-Beblawi was told by the deputy prime minister of the UAE, Sheikh Mansour Bin Zayed Al Nahyan, that “Arab support for Egypt will not last long, and Egypt should come up with innovative and unconventional solutions.”

El Mahdi, a former dean of the economics and political science faculty at Cairo University, told IPS that “The armed forces should stop funding the national economy and go back to their essential mission, which is maintaining security along the borders.”

She said foreign investment has almost fled from Egypt, as reflected by the small numbers of experts and foreign investors who attend economic conferences and seminars held in Egypt. “If we want to bring them back again, then there is no alternative other than political stability and security,” she said.

El-Beblawi’s cabinet had a great opportunity to curb the economic decline that the government of ousted president Mohamed Morsi (2012-2013) exacerbated, “but they didn’t,” el Mahdi said.

“The current state of Egypt’s economy has become a disaster that requires immediate intervention to save it before it’s too late,” said Salah Gouda, head of the Economic Studies Centre in Cairo.

The unemployment rate has reached 15 percent, which means there are about 10 million people unemployed in this country of 84 million, Gouda said.

“Everyone was expecting a lot from Beblawi’s cabinet, who took the oath after the Jul. 3 military crackdown against Morsi,” he added. “But all the crises plaguing Egyptians while Morsi was in power still exist – gas shortages, traffic jams, lack of security – even train accidents.

“I can say that interim President Adly Mansour’s first hundred days have resembled the first 100 days of former president Morsi – both are disappointing,” Gouda told IPS.

He said the current regime frittered away public support after the Jun. 30 public uprising, in addition to 12 billion dollars in financial aid from the Gulf countries.

“Despite all this, the government’s performance was weak, with the ministries working merely to make it through the current period without being exposed to legal questions later,” he argued.

The military are now leading Egypt in many fields, especially the economy, standing by the current government to enforce law and security, and addressing any crises that arise. “The military are very keen to keep their prestige,” he added.

Another problem the current regime is facing, Gouda said, was that “after foreign investment fled as a result of the security situation, large numbers of businessmen belonging to the Muslim Brotherhood or supporters of the ousted president decided to withdraw their investments to strike an economic blow to the current system, and they succeeded to some extent.”

Ali Fayez, a former head of the Federation of Egyptian Banks, told IPS “the banking system stopped funding small and big projects, which led to hundreds of businessmen being on the black lists of banks as a result of their inability to pay some instalments.

“European and Gulf subsidies are vitamins and painkillers,” he said. “It would be better if they pumped real investments into Egypt, because the results would be more sustainable than cash payments.”

“Domestic debt has exceeded all safe limits since before the Jan. 25, 2011 revolution, and all the cabinets that have ruled since the fall of Hosni Mubarak [1981-2011] have depended on delaying and rescheduling payments,” Fayez told IPS. “None of the successive governments have tried to face it, and this is seen as a major burden for the coming generations.

“The only difference between the two governments, the Muslim Brotherhood and the current administration, is that the former was relying on aid from Qatar and Turkey while the second is depending on the UAE, Saudi Arabia and Kuwait,” Fayez said.