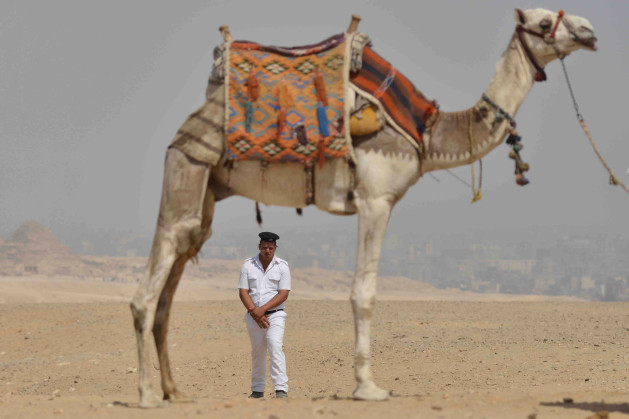 The crisis is robbing Egypt of tourists, and a lifeline. Credit: Hisham Allam/IPS.

CAIRO, Sep 2 2013 (IPS) - It is Anna Betanova’s second visit to Egypt and very different from the last time. The 26-year-old accountant from St Petersburg, Russia, is in Hurghada, the prominent resort destination on the Red Sea coast, some 400 km southeast of the capital Cairo. “The beaches are almost empty,” she told IPS, “and we spend most of the day watching TV.”

Sightseeing tours have been cancelled, she said, and they have been advised to stick to their hotel premises.

Egypt’s political unrest is taking a toll on its tourism industry, a sector that accounts for 11 percent of the country’s GDP. The North African nation had welcomed 14.7 million visitors in 2010, according to World Tourism Organisation figures, generating revenues of 12.5 billion dollars.

A year later, Egypt witnessed its Arab Spring. The people’s revolution on Jan. 25, 2011, culminated in the overthrow of president Hosni Mubarak’s 29-year authoritarian regime. On Jun. 29, 2012, the country got its first democratically-elected president, the Islamist Mohamed Morsi. And everyone thought the worst was over.

“How can we expect European tourists to visit a state which imposes a curfew on its citizens?"

Tourist numbers, which had fallen to 9.5 million in 2011, recovered to 11.2 million by the end of 2012. This year too had begun on an encouraging note, according to Egyptian tourism minister Hisham Zaazou. The country had hosted five million tourists by the first half of the year, earning revenues of four billion dollars, he said.

But exactly a year after Morsi took over, Egyptians disappointed with his policies began a clamour for his ouster. Their massive protests led to Gen. Abdel Fattah El-Sisi removing the country’s fifth president in a military move on Jul. 3. There has been turmoil since, with Morsi supporters mounting massive protests and the security forces coming down heavily on them. The raid against two camps of Morsi supporters at al-Nahda Square and Rabaa al-Adawiya Mosque on Aug. 14 resulted in the loss of more than 600 lives.

Given the uncertainty, several European Union countries as well as Britain and Japan have warned their nationals not to go to Egypt, or to get out of there.

“I thought the warnings were an exaggeration,” Paul Casper, a 35-year-old tourist from Berlin, Germany, told IPS. “But as soon as I arrived at the airport and saw the armed men and tanks, I knew things were bad.” Casper has since been confined to his hotel, and feels trapped.

The Russia Federal Agency for Tourism, the country’s highest tourism authority, had on Aug. 19 said that Egyptian tourist resorts would be free of their countrymen by the beginning of September.

Tourism minister Zaazou’s efforts to address the representatives of Russian media at a press conference in Hurghada a day later did little to help matters. Especially since continuing terror attacks against security forces in the Sinai region belied his claim that both Hurghada and Sharm el-Sheikh, the world-renowned Red Sea holiday destination on the southern tip of the Sinai peninsula, were relatively insulated from political events and thus safe to visit.

The fall in tourism has indeed reached critical levels. The proportion of cancelled flight bookings has increased by 40 percent, Zaki told IPS. Worse, some 50,000 tourists will be heading home soon.

Dr Ahmed Saleh, director of the historic Abu Simbel Temples in Nubia, 899 km south of Cairo, said there was only one tourist there on Aug. 31 and the revenue for the entire day, 75 dollars. The twin temples were carved out of a mountainside in the memory of pharaoh Ramses II and his queen Nefertari and relocated to a higher level in 1968 when the Aswan High Dam was built.

The woes of Egypt’s tourism industry have been compounded by events in neighbouring Syria. The alleged use of chemical weapons against civilians, including children, has the U.S. and allies contemplating a strike on its government. “The more the talk about a military strike against Syria increases, the more the recovery of tourism in Egypt becomes impossible,” Egypt’s former economy minister Sultan Abu Ali said.

“How can we expect European tourists to visit a state which imposes a curfew on its citizens?” asked Ahmed el Khadem, former chairman of the Egypt Tourism Authority. He was referring to the curfew that had been imposed on the country’s 14 governorates following the events of Aug. 14.

As he sees it, the biggest loss for tourism lies in the mass exodus of skilled labour to other professions. The Chamber of Tourist Facilities in the Red Sea, a government body, announced the closure of nearly 63 hotels and a tourist village in Hurghad.

“In previous crises,” Khadem told IPS, “we used to rely on domestic tourism to compensate for the gap.” Today, even at its best, domestic tourism would make up not more than five percent of international tourism, he said.

“Unless the political situation is resolved, there will be an economic catastrophe,” former economy minister Ali warned.

Already unemployment levels in the country have risen from 10.5 percent last year to 13.5 percent, while the rate of inflation has risen to 12 percent, Ali added. Simultaneously, the Egyptian pound has depreciated against the U.S. dollar by 15 percent, he said.

Alarmed, the country’s civil aviation ministry launched a joint initiative with the tourism ministry on Aug. 31 to stimulate domestic tourism and increase hotel occupancy rates in tourist cities. Among the measures is an integrated tourist programme which includes a plane ticket and three-night accommodation at four- or five-star hotels for 140 dollars. Earlier, domestic flights alone would cost 150 dollars.

Magdy al-Adasi, a businessman who also has interests in hotels, sees a more sinister design in the EU countries’ decision to recall their nationals from Egypt. “These are undeclared economic sanctions to force the Egyptian regime to slavishly accept EU mediation,” he said.

Businessmen are caught between two tough choices, al-Adasi said – to keep business going and lose money, or to close business and lose investment.