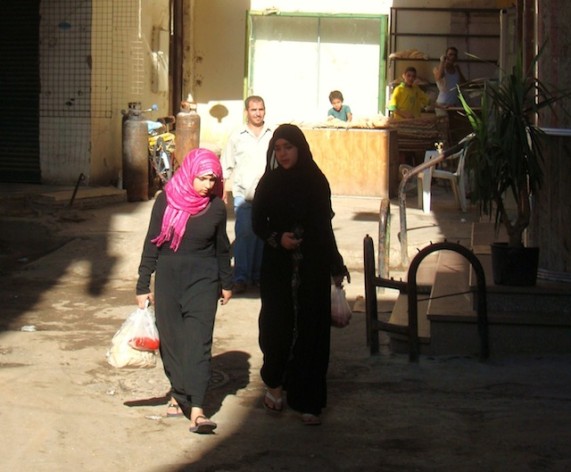 El HAWAMDIA, Egypt , Aug 5 2013 (IPS) - Each summer, wealthy male tourists from Gulf Arab states flock to Egypt to escape the oppressive heat of the Arabian Peninsula, taking residence at upscale hotels and rented flats in Cairo and Alexandria. Many come with their families and housekeeping staff, spending their days by the pool, shopping, and frequenting cafes and nightclubs. Others come for a more sinister purpose.

In El Hawamdia, a poor agricultural town 20 kilometres south of Cairo, they are easy to spot. Arab men in crisp white thawbs troll the town’s pot-holed, garbage-strewn streets in their luxury cars and SUVs. As they arrive, Egyptian fixers in flip flops run alongside their vehicles, offering short-term flats and what to them is the town’s most sought-after commodity – underage girls.

Each year, in El Hawamdia and other impoverished rural communities across Egypt, thousands of girls between the ages of 11 and 18 are sold by their parents to wealthy, much older Gulf Arab men under the pretext of marriage. The sham nuptials may last from a couple of hours to years, depending on the negotiated arrangement.

“The girl may have 10 siblings, so the family considers her as a commodity.” -- Sandy Shinouda, a Cairo-based official at the IOM’s Counter-Trafficking Unit

“It’s a form of child prostitution in the guise of marriage,” Azza El-Ashmawy, director of the Child Anti-Trafficking Unit at the National Council for Childhood and Motherhood (NCCM) tells IPS. “The man pays a sum of money and will stay with the girl for a few days or the summer, or will take her back to his country for domestic work or prostitution.”

The girl is returned to her family when the marriage ends, usually to be married off again.

“Some girls have been married 60 times by the time they turn 18,” says El-Ashmawy. “Most ‘marriages’ last for just a couple of days or weeks.”

The deals are hatched in El Hawamdia’s myriad “marriage broker” offices, identifiable by the conspicuous presence of air-conditioners in a ramshackle town with intermittent power.

The brokers, usually second-rate lawyers, also offer a delivery service. Village girls as young as 11 are brought to the Arab tourists’ hotel or rented flat for selection. Arab men travelling with their wives and children often arrange a separate flat for such purposes.

The temporary marriages offer a way to circumvent Islamic restrictions on pre-marital sex.

“Many hotels and landlords in Egypt will not rent a room to unmarried couples,” explains Mohamed Fahmy, a Cairo real estate agent. “A marriage certificate, even a flimsy one, allows visiting men to have sexual liaisons.”

Engaging in sexual relations with minors is illegal in Egypt. Brokers can help with that too, forging birth certificates or substituting the identity card of the girl’s older sister.

A one-day mut’a or “pleasure” marriage can be arranged for as little as 800 Egyptian pounds (115 dollars). The money is split between the broker and the girl’s parents.

The “dowry” that Gulf Arab men are prepared to pay for sex with young girls is a powerful magnet for impoverished Egyptian families in a country where a quarter of the population subsists on less than two dollars a day.

A NCCM-commissioned survey of 2,000 families in three towns near Cairo – El Hawamdia, Abu Nomros and Badrashein – found that the hefty sums paid by Arab tourists was the main motive for the high rate of “summer marriages” in these towns.

Some 75 percent of the respondents knew girls involved in the trade, and most believed the number of marriages was increasing.

The 2009 survey indicated that 81 percent of the “spouses” were from Saudi Arabia, 10 percent from the United Arab Emirates, and four percent from Kuwait.

The International Organisation of Migration (IOM) too has been studying these “marriages”. “The family takes the money, and the foreign ‘husband’ usually leaves the girl after two or three weeks,” says Sandy Shinouda, a Cairo-based official at the IOM’s Counter-Trafficking Unit.

“The unregistered marriages are not recognised by the state and afford no rights to the girl, or any children that result from these unions.”

Shinouda, who formerly ran a shelter for victims of the trade, says most of the young girls come from large families that see marriage to an older, wealthier foreigner as a way to escape grinding poverty.

“The girl may have 10 siblings, so the family considers her as a commodity,” she says.

Parents may seek a broker to arrange a marriage once their daughter reaches puberty. In about a third of cases the girl is pressured into accepting the arrangement, the NCCM study found.

This can have a profound psychological impact on the girl’s mental health, says Shinouda.

“The girls know their families have exploited them…they can understand that their parents sold them,” she says. “Reintegration is a big challenge because in many cases if you return the girls to their family the parents will sell them again.”

Egypt’s 2008 Child Law criminalises marriages to girls who have not reached the legal age of 18. Another law prohibits marriages to foreigners where the age difference exceeds 25 years.

But the laws are poorly enforced, concedes NCCM’s El-Ashmawy. Anecdotal evidence suggests the trade has grown since Egypt’s 2011 revolution as a result of worsening economic conditions and an ineffectual police force.

“It’s not simply about poverty or religion,” she asserts. “It’s cultural norms that support this illicit trade – people believe it is in the best interest of the girls and the families at large. And brokers succeeded in finding common ground with families in order to exploit young girls.”