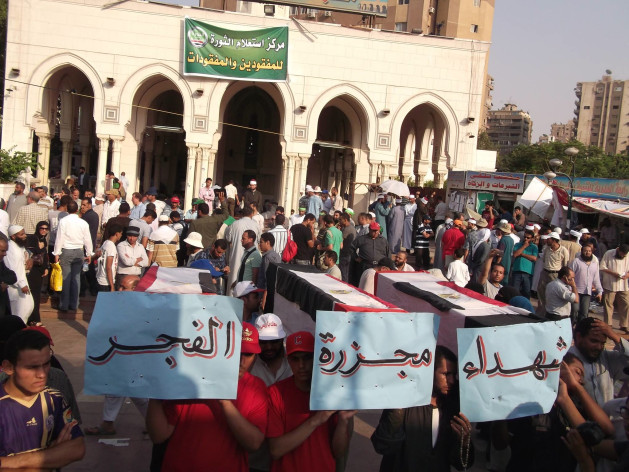 The killing of Muslim Brotherhood members has only strengthened their resolve to fight on. Credit: Khaled Moussa al-Omrani/IPS.

CAIRO, Aug 4 2013 (IPS) - Egypt’s military chief, General Abdel Fatah El-Sissi, who in July announced on state television that the army had ousted Egypt’s first democratically elected president, has tried to wrap a veneer of democracy around actions that most others have condemned as a coup.

In the weeks since he deposed Egyptian president Mohamed Morsi, the 58-year-old head of the armed forces has repeatedly claimed that military intervention was necessary to resolve a debilitating political impasse and “save democracy” in Egypt.

Morsi’s popularity had plummeted in the year since his election, and the Islamist leader had ignored demands for national reconciliation and mass demonstrations calling for early elections, leaving the army with no choice but to remove him by force, the military has said.

“They’re clamping down on Islamists, and once they are firmly in power they will go after anyone else who speaks out.”

Since ousting the country’s elected leader on Jul. 3, Egypt’s de facto strongman has suspended the constitution and installed an interim civilian government that has waged a vengeful campaign of reprisals against the former president and his allies in the Muslim Brotherhood. Dozens of the Islamic group’s leaders have been arrested and face an array of criminal charges that include inciting violence, thuggery, and “insulting the judiciary.”

Morsi has been held virtually incommunicado by the army since he was removed from power. Prosecutors have charged the former president with murder and espionage in relation to a 2011 prison break – charges that some rights researchers say are politically motivated.

“The military is out to discredit and destroy the Muslim Brotherhood using any means necessary,” says rights lawyer Negad El-Borai.

Television channels sympathetic to the Muslim Brotherhood have been taken off the air. Several foreign media outlets were warned against spreading “misinformation”, and prevented from covering pro-Morsi rallies.

Meanwhile, state-run media, which trumpeted the praises of Hosni Mubarak during his 30-year rule, has flooded newspapers and television channels with patriotic montages and adulation of the armed forces. Many private media outlets have joined the chorus.

Having come to power by undemocratic means, El-Sissi spent much of the last month rallying public support and legitimising the military’s role as the final arbiter of democracy in Egypt.

The general’s staunchest supporters – liberal and secular Egyptians virulently opposed to Brotherhood rule – claim the military “had to destroy democracy in order to save it.”  But critics have censured the army’s foray into civilian politics.

The military’s intervention prevented “any last minute efforts that would save face and pave the way for constructive change, such as holding a referendum over the presidency or the building of a national unity government, leading to early elections,” writes political analyst Marwan Bishara.

With Morsi’s removal, the military promised to end divisive politics and restore stability. Instead, it has thrust Egypt’s largest political group outside the political stream, and dangerously polarised the country.

After three weeks of unrest, El-Sissi called last week for the public to take to the streets as a show of support for his rule, and to give him political cover for a brutal crackdown on his opponents in the Muslim Brotherhood.

“I ask… all honest and trustworthy Egyptians to come out… to give me a mandate so that I can confront violence and potential terrorism,” he said in a nationally televised speech.

Days later, at least 80 of Morsi’s supporters were dead and hundreds more injured after riot police targeted a mass demonstration in Cairo using live ammunition. It was the second bloody crackdown on the Muslim Brotherhood since Morsi was toppled.

The killings have only hardened the group’s resolve. Brotherhood members insist the protests will continue until the military-backed government is dissolved and Morsi’s democratically elected one is reinstated.

But the military shows no signs of backing down. Rather it is stepping up pressure on Morsi’s supporters, widening its arrests, and positioning for an even tougher crackdown on its opponents, including peaceful protesters.

Analysts say the threat of “terrorism” is being used as a pretext to restore controversial Mubarak-era institutions and practices.

Earlier this week, Egypt’s interior ministry announced that several notorious state security departments dismantled following the country’s 2011 uprising would be reinstated. The interim government has also signalled it could bring back the Emergency Law that was used to stifle political dissent for decades.

While the army enjoys widespread support among those who called for Morsi’s overthrow, many Egyptians bitterly recall the rights abuses and violent repression under 18 months of military rule that followed the overthrow of Mubarak in 2011.

One senior Brotherhood member warned: “They’re clamping down on Islamists, and once they are firmly in power they will go after anyone else who speaks out.”