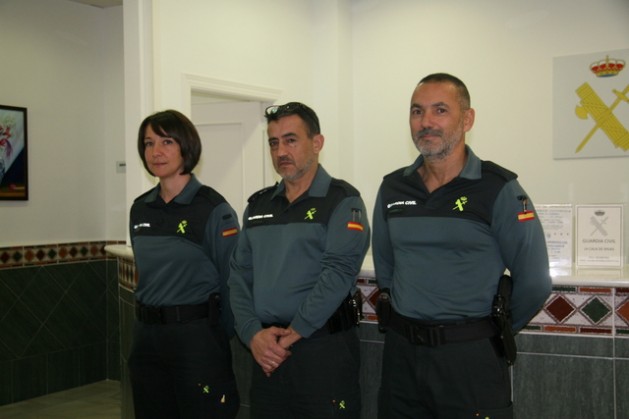 MALAGA, Spain, Dec 10 2013 (IPS) - They are members of Spain’s Guardia Civil. But instead of pursuing undocumented immigrants like the rest of the police in Spain, they are there to defend them from the crimes to which they often fall victim.

“We frequently dress as civilians and go around the province to gather complaints in Guardia Civil [Spain’s federal military-status police force] barracks, and in homes, hospitals and non-governmental organisations [NGOs],” Santiago González, a member of the Guardia Civil immigrant support team (EDATI) in the southern region of Málaga, told IPS.

The regional Málaga EDATI unit, made up of three men and one woman, began to function in 2006 and is one of the 13 EDATI units operating since 2000 along Spain’s Mediterranean coast, from Barcelona in the northeast to Huelva in the southwest. All of the units must have at least one female member.

Their mission is not to fight irregular immigration, but to advise undocumented immigrants on their rights, help them fill out paperwork, such as applications for residency in Spain, and work against those who attempt to cheat, mistreat or exploit them.

Unlike the rest of Spain’s police, including the Guardia Civil itself, the EDATI units neither arrest nor deport immigrants.

For that reason, immigrants can turn to them without fear in order to file complaints and reports about theft, lost passports, exploitative labour conditions, the sale of fake work contracts, abuses or rape.

But actually, undocumented female immigrants who report gender violence cannot be deported, since an amendment to the law on rights and freedoms of immigrants in Spain was passed in 2011.

“It is often the rich who exploit them the most,” González said.

For example, a Russian magnate who owns a mansion in the luxury resort city of Marbella on the coast in the Málaga region kept undocumented household staff from Tibet locked in “without money or food” during his sometimes lengthy trips outside of Spain, EDATI agent Juani Valdivia told IPS.

In one of its latest operations, the Málaga unit dismantled an illegal business set up by three women who offered work in domestic service over the internet to undocumented immigrants, who they charged a commission for their services.

Stories like these are common. “In Málaga we work above all with South American immigrants, mainly Paraguayans, and with people from Senegal,” said another EDATI agent, José López.

Nationwide, the EDATI units assisted 10,700 immigrants in 2012, most of them men from North Africa, Eastern Europe or South America, the Guardia Civil website reports. A total of 12,000 operations were carried out, 11,200 at the initiative of the agents themselves and the rest in response to complaints filed.

In this southern European country of 47 million there were 5.4 million foreign nationals living legally in 2012, according to the National Statistics Institute.

Official data also shows that 573,712 immigrants without permits to live in Spain are “empadronados” or registered with municipal governments. There are also an indefinite number of undocumented immigrants who have not registered.

The ministry also reported that 26,457 undocumented immigrants were deported in 2012 – 16.3 percent fewer than the previous year.

Minors under 18 cannot be deported from Spain.

The ultimate obverse of the EDATI units is the decision by the government of right-wing Prime Minister Mariano Rajoy to install razor-sharp concertina wire, starting in late October, in the valley that separates the Spanish city of Melilla in North Africa from Morocco – a move that has drawn fire from the European Union and human rights groups.

“There are lawyers and businesspeople who are shocked that as ‘guardias civiles’ we don’t detain undocumented immigrants. At first it was even hard for people on the force to accept it,” González said in an interview in his office in the seaside town of Mijas.

“It’s also important for immigrants to get to know us better, and to trust us,” he added.

Fear of deportation makes many immigrants reluctant to file complaints, despite the frequency of bad working conditions, false promises of work contracts and regularisation, and supposed lawyers and advisers who demand large sums of money for obtaining documents that are sometimes cost-free or who sell fake job contracts.

“It’s others committing crimes against them,” said Rafael Porta, another member of the Málaga EDATI unit, during seminars and activities on immigration held Oct. 26.

“When you work with immigrants, you become almost more of an ‘NGO’ type than a police officer,” said Porta, who is studying Arabic to be able to communicate better with the people he is tasked to protect.

Hana El Rharnati, a 28-year-old who works in the Moroccan Association for the Integration of Immigrants in Málaga, has suffered fear of deportation.

She went to EDATI when she was an undocumented immigrant, after she was turned down for a renewal of her student residency permit and her purse was robbed on the bus. “They filed the complaint for me,” she said.

El Rharnati, who has been living in Spain since she was 18, says the members of EDATI are “a mix of social worker and ‘guardia civil’ who have a human touch, not so administrative and bureaucratic.”

She said there will be no decline in crimes against undocumented immigrants as long as the requirements for living and working in Spain are “so tough.”

Foreign nationals who want to legalise their immigration status must prove that they have lived constantly in the country for at least three years, show that they have no criminal record, and have a work contract for at least one year, signed by an employer.

Without so many requirements, “immigrants wouldn’t feel forced to enter into false marriages or buy ‘empadronamientos’ [municipal registrations] or job contracts,” she said.

She argued that it was contradictory for the authorities to set rigid requisites for obtaining or renewing residency permits while employing Guardia Civil agents to combat attempts to swindle or cheat them.

The minimum fine for employing an undocumented immigrant is 10,000 euros [13,000 dollars], but “levying fines is not the solution because someone else will replace them and they will continue to cheat immigrants,” the young Moroccan woman said.

Miguel Pajares, who specialises in immigration issues, told IPS that the EDATI units and protocols of best practices for security forces were important. “But there is still much to be done,” he added, “given that the Aliens Act takes primacy over the protection of the basic rights of people.”