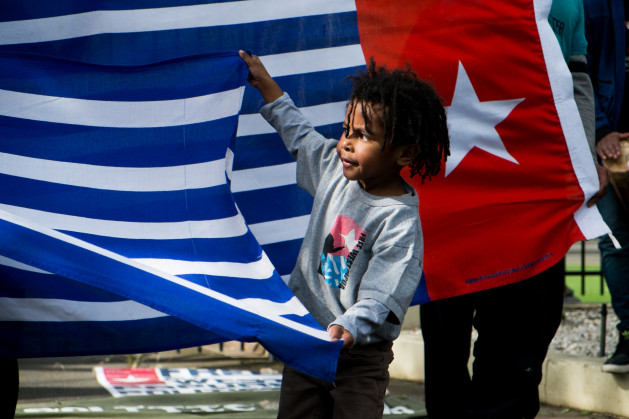 SYDNEY, Dec 29 2013 (IPS) - The indigenous struggle for liberation in West Papua on the western half of the island of New Guinea in the south-west Pacific, with the loss of thousands of lives, is far from ending. But, despite political uncertainties, a united coalition of pro-independence leaders has reignited hope of freedom by galvanising the support of a Pacific Islands inter-governmental organisation.

Indigenous Melanesian resistance to Indonesian governance of West Papua dates back to a United Nations supervised Act of Free Choice on independence in 1969 that was criticised as fraudulent after less than one percent of the population was selected to vote. That resulted in a vote for Indonesian integration.

“So far Jakarta has not provided any invitation letter for the team to visit the respective territories.”

“Support within the Melanesian region is vital to building a strong foundation for gaining international support and recognition,” Dr John Ondawame, WPNCL’s Vice-Chairman in Vanuatu told IPS. “The struggle of the people of West Papua is no longer an internal Indonesian issue.”

The West Papuan coalition was, for the first time, invited as official guest to the Melanesian leaders’ summit held in Noumea, New Caledonia, in June. Indonesia, which has MSG observer status, was also present.

During an address to the summit, Ondawame called on the Melanesian group to support the re-inscription of West Papua onto the United Nations decolonisation list and send a fact-finding mission to the Indonesian provinces to investigate human rights abuses.

The meeting ended with Melanesian leaders endorsing the “inalienable rights of the people of West Papua towards self-determination” and efforts to raise concerns about atrocities with the Indonesian government.

It was announced that a foreign ministers’ visit to the Indonesian provinces would take place within six months ahead of a decision on West Papua’s membership of the MSG. But, although Indonesia invited Melanesian leaders to Jakarta to be briefed about developments in West Papua, an MSG-led visit to the disputed territories has not taken place.

An MSG Secretariat spokesperson in Vanuatu advised IPS that “dates for the mission to Indonesia are still being discussed,” and members are keen for it to occur in early 2014.

Ondawame added that “so far Jakarta has not provided any invitation letter for the team to visit the respective territories.”

Indonesia has long claimed that West Papua is an internal matter, but the suffering of its indigenous population is stirring growing solidarity amongst Melanesians in the Pacific Islands.

In 2001, the Indonesian government responded to grievances by granting special autonomy to the provinces of Papua and West Papua, and increasing funding to the region, which amounted to more than 190 million dollars last year. It recently appointed a government unit to address infrastructure, public service and social issues.

However, West Papuans still suffer severe socio-economic hardship and have few freedoms. Twenty-seven percent of people in Papua and 31 percent in West Papua live in poverty, compared to 13 percent in East Java and 3.7 percent in Jakarta.

Up to 500,000 West Papuan lives were lost in the past 50 years due to Indonesian military and government policies in the territory, according to a University of Sydney report.

During the past six months public demonstrations in support of West Papua have increased across the region. A concerned group of indigenous people from Australia and West Papua sailed to West Papua in September in a Freedom Flotilla that was a symbolic voyage to the shores of the Indonesian province to highlight issues of freedom and justice.

In Papua New Guinea, the Melanesian United Front launched a campaign and petition to boost public pressure, and urban demonstrations were supported by Port Moresby’s Governor, Powes Parkop. A letter of international solidarity signed by 98 international and Pacific non-governmental organisations was sent to the MSG in October.

Politically West Papuans see hope in the MSG’s promotion of decolonisation elsewhere in the region, such as in East Timor, New Caledonia and French Polynesia, and the resolute support of Vanuatu’s leadership in recent years.

In September, Moana Carcasses, Vanuatu’s Prime Minister, called on the United Nations General Assembly to “rectify some historical errors” and appoint a special representative to investigate human rights abuses and political issues in the beleaguered territory.

But the Melanesian United Front’s Patrick Kaiku is concerned that “observer states, such as Indonesia, which wield significant diplomatic resources and experience, will dictate the terms of West Papuan membership in the MSG if they are allowed to exert their influence.”

“The independence of the MSG must be maintained,” he asserted.

Papua New Guinea, an influential Melanesian state with observer status at the Association of Southeast Asian Nations (ASEAN), has substantial trade ties with Indonesia, and also security concerns about its shared land border. In June its leaders accepted an invitation to business talks in Jakarta instead of attending the MSG Leaders summit. Solomon Islands leaders were briefed separately by the Indonesian government on developments in West Papua during a bilateral visit in August.

However, Ondawame is confident his coalition has “won the diplomatic battle in the region” and that an unstoppable political momentum has begun. He remains adamant that the MSG holds the key to progressing political dialogue and addressing a human rights crisis that many believe has been met with silence from the international community for too long.