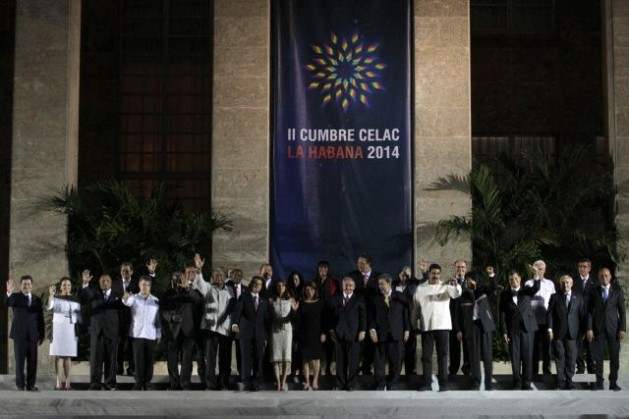 Heads of state at the Second Summit of the Community of Latin American and Caribbean States (CELAC), at the Palacio de la Revolución, Havana. Credit: Jorge Luis Baños/IPS

HAVANA, Jan 30 2014 (IPS) - Heads of state and government at the Second Summit of the Community of Latin American and Caribbean States (CELAC) made a joint commitment to reduce poverty, hunger and inequality, and declared their region a “zone of peace”.

The goals, which even the presidents regard as “ambitious”, came at the end of two days of deliberations in the Cuban capital, and include action for food security, access to education and better job opportunities, as instruments to reduce inequalities in the most unequal region of the world.

“We have to integrate for the sake of our own development, but this is not just about more wealth and consumption, it is the struggle for human happiness." -- Uruguayan President José Mujica

By proclaiming a continent-wide zone of peace – with the exception of Canada and the United States – the region committed itself to act “as a space of unity within diversity”, and confirmed the two-year-old CELAC as the regional political forum for dialogue and collective action at the highest level, regardless of ideology.

The summit, held in Havana Jan. 28-29, was attended by the heads of all Latin American and Caribbean countries except Panama, Belize and El Salvador (in the last two cases because of illness). The meeting of 30 presidents also put an end to Cuban isolation.

“This is a historic summit,” because it has decided to address an issue that has long been demanded by the Latin American peoples: the fight against inequalities, hunger and poverty, said Brazilian President Dilma Rousseff.

Another woman, Chilean president-elect Michelle Bachelet who is due to take office Mar. 11, said “poverty and hunger are not the only forms of inequality,” and emphasised that governments must address “all inequalities,” including gender divisions, urban-rural disparities, and the injustice faced by indigenous people and Afro-descendants.

The 83 paragraphs of the Declaration of Havana ratified the commitment to promoting social inclusion and sustainable development with quantifiable policies, measures and goals, in order to spread “the enjoyment and exercise of economic, social and cultural rights” to all the population, especially the most vulnerable.

It also calls for decent, long-term jobs, universal public health, the right to adequate housing, and industrial and productive development as “essential factors for eradicating hunger, poverty and social exclusion.”

The Economic and Social Panorama of the Community of Latin American and Caribbean States 2013, a study presented at the summit by the Economic Commission for Latin America and the Caribbean (ECLAC), shows inequality statistics for this region of over 600 million people.

The study says that the poorest one-fifth of the population on average accounted for five percent of total income, and even less in countries like Bolivia, Honduras and the Dominican Republic. Meanwhile, the wealthiest fifth received up to 55 percent in countries like Brazil.

In 2012 the poverty rate was 28.2 percent, and 11.3 percent of the population lived in extreme poverty. This means that 164 million people live in poverty and, of them, 66 million are extremely poor. These “shameful figures,” as some presidents called them, were the centre of discussions at the meeting.

Progress in recent years has been “slow, fragmented and unstable,” Cuban president and summit host Raúl Castro said in his opening speech.

According to figures from 2011 and 2012, the rate of inequality reduction has been above one percent a year only in Argentina, Brazil, Peru, Uruguay and Venezuela, and above 0.5 percent a year in Chile, Colombia, Ecuador and Panama.

Poverty has its greatest impact on children and teenagers, since its incidence is higher in households with a large number of dependent children. A total of 70.5 million children under 18 are affected, of whom 28.3 million live in extreme poverty, according to ECLAC.

Child poverty is greatest in Bolivia, El Salvador, Guatemala, Honduras, Nicaragua and Peru, where an average of 72 percent of children are extremely poor, based on data from 2000-2011.

The countries with the lowest child poverty rates (19.5 percent) mentioned by ECLAC were Argentina, Chile, Costa Rica, Ecuador and Uruguay.

Alicia Bárcena, ECLAC’s executive secretary, said Latin America is a “region of contrasts” and recommended that its governments should promote public policies that contribute to poverty reduction. Employment, she said, is the “master key” to remediating inequality.

At the summit, Castro handed over the rotating presidency of CELAC to Costa Rica. In his view, Latin America and the Caribbean have all the necessary conditions to change the unbalanced social panorama outlined by ECLAC, since they possess natural riches ranging from extensive mineral reserves to one-third of the world’s fresh water.

The sub-continent also has 12 percent of the world’s arable land, the highest potential for expanding food production and 21 percent of all natural forests.

The populations of the región, said Castro, want fairer distribution of wealth and income, universal, free and high-quality education, full employment, better wages, the elimination of illiteracy, real food security, health care for all, and the right to decent housing, drinking water and sanitation.

Uruguayan President José Mujica’s contribution reflected his characteristic humanism. “We have to integrate for the sake of our own development, but this is not just about more wealth and consumption, it is the struggle for human happiness,” he said.

“We cannot attempt development that goes against human happiness. That would not be development,” said Mujica. “Defending life means being able to put aside waste and pollution,” and he asked his colleagues, “Why do we waste so much?”

Cuban analyst Carlos Alzugaray told IPS that, beyond the goals reflected in the Declaration of Havana, CELAC has emerged from its second summit “facing the challenge of consolidation” as a forum for political integration “that will foment regional cooperation and build a regional profile with a single voice.”

It also has the challenge, said the political scientist, of persuading other blocs in other world regions to “accept and recognise it as a legitimate and authoritative voice to negotiate in the name of the entire region.” This can only be achieved by “sustained, firm but cautious work,” he said.

With additional reporting from Ivet González.