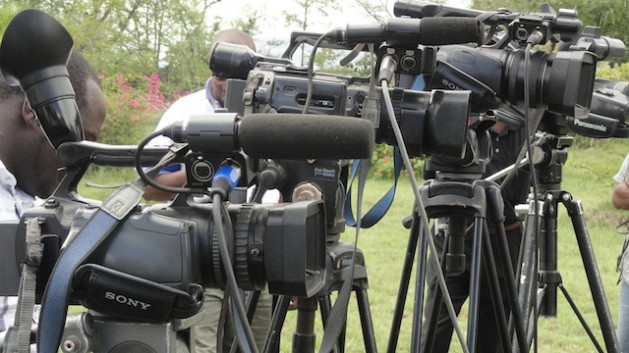 There are concerns that Chinese dominance of Kenya’s digital migration process could be used to muzzle freedom of the press. Courtesy: Miriam Gathigah

NAIROBI, Jan 14 2014 (IPS) - Controversy and confusion have marked Kenya’s transition from analogue to digital television in keeping with the 2015 International Telecommunication Union deadline when all analogue signal transmission will cease.

Digital migration, intended to give consumers of media content more choice and better service quality, has faced various hurdles in this East African nation and the government has already postponed the switch several times.

While the fate of a court case filed by three major media houses challenging the government’s decision to deny them a digital licence is yet to be decided, there are increasing concerns that the Chinese are occupying too much space in the local media platforms – particularly the Chinese dominance of the digital migration process.

Javas Bigambo, a political analyst with Interthoughts Consulting, a firm specialising in media, governance and policy, tells IPS it was no coincidence that a Chinese-owned company was given a digital licence and local media houses with significant infrastructure to transmit digitally were not. “We are still reeling from the controversial draconian Media Bill with heavy penalties for journalists and media houses, and now the government is auctioning media freedom to the highest bidder.”

Local TV broadcasters will be reduced to only producing content as Chinese-owned Pan-Africa Network Group’s (PANG) and SIGNET – a subsidiary of the national broadcaster – will serve as middlemen between local TV stations and consumers of media content. Both parties will provide all transmission at an agreed cost with the respective local media houses.

Alex Gakuru, the chair of ICT Consumers Association of Kenya and a member of the Digital Transition Committee multi-stakeholder task force established by the government, says that because China represses its domestic media there has developed in Kenya “the futuristic fear [that the Chinese will repress local media] ignore our constitution, laws and restructured judiciary.”

But Gakaru says such fears are misguided.

“The status of public communications is the legal and sole mandate of the Communications and Media Authority, rendering it illogical to conclude that all foreign companies ignore local laws opting to observe their home countries laws.”

Gakuru says that as the only digital signal distributors, “PANG and SIGNET are legally required to be neutral signal carriers – neither discriminating nor prioritising some broadcaster’s content over others, failure to which their licences risk revocation.”

But Gakuru tells IPS that one signal distributor would have been sufficient as a cost-saving measure as is the case with countries such as Australia.

“Two signal distributors were unnecessary and [financial and spectrally] resource wasteful in the first place. A third or further multiple distributors only aggravate the situation, if at all technically feasible.”

Grace Githaiga, an associate with Kenya ICT Action Network (KICTANet), tells IPS that although the Communications Commission of Kenya (CCK), the independent regulatory authority for the communication industry in Kenya, argues that local media houses lost their bid to acquire a digital licence fairly, “local media houses have reason to be concerned over foreign control of the digital migration in the sense that we are mortgaging our rights.”

“CCK argues that it advised the local media companies to form a consortium and bid, which they did and lost. [But] there seems to be no affirmative action in supporting local entities,” she says.

But Gakuru says that the “fear the Chinese argument” is an exaggeration in this case since “mobile phone operators use Chinese technologies with millions of phones among other consumer electronics either manufactured or components assembled in China – including the iPhone, iPad and other Apple products.”

According to the government, the suspension was on condition that foreign companies commit to offload 20 percent of their shares to locals within three years of starting operations.

Gakuru says that the bone of contention between the government and local media houses is not media freedom but profit margins.

“We must recognise China as a superpower. Their dominance on Kenya’s digital migration landscape is a manifestation of their broader information and communications technologies ecology,” Gakuru says.

Gakuru adds that the current situation where media ownership has been the privilege of a few individuals to grant signal distribution to the same few is not an expression of media freedom.

According to Gakuru, challenging PANG as a signal distributor “would be an uphill task. They won an open and public tender bid and there is no need to insinuate favouritism, corruption or even that the media will be muzzled. Separate but associated StarTimes Media focuses on Set Top Boxes [which can be used to receive digital signals for analogue TV sets] and Pay TV business.”

Nonetheless, Githaiga cautions “there is need to understand the role of the signal carrier [in this case PANG and SIGNET].”

“Is the signal carrier for example allowed to edit content from any of the providers? Is it allowed to switch off a signal if content is considered harmful or even anti-government? This information needs to be made clear,” Githaiga says.