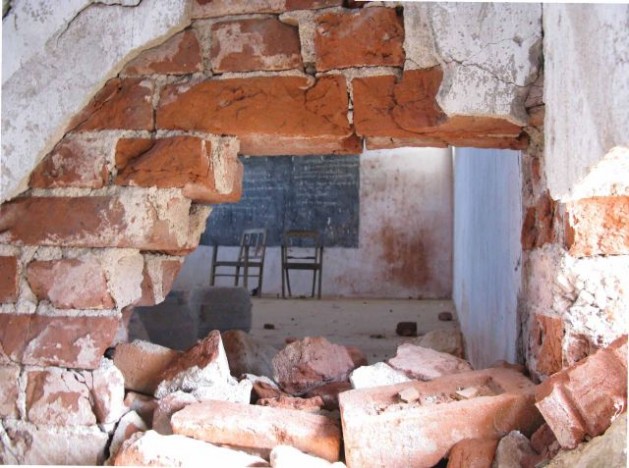 Naxalite fighters exploded two bombs in Belhara High School, Jharkhand, on the evening of Apr. 9, 2009. One bomb, on the school's lower floor, blasted a hole in the wall between the two classrooms, as well as outside the wall. Credit: Bede Sheppard/Human Rights Watch (India)

UNITED NATIONS, Feb 28 2014 (IPS) - There was a time when images from war zones featured only battlefields and barracks. As warfare moved into the 20th century, pictures of embattled urban centres and rural guerilla outposts began to make the rounds.

Public squares are now common sites of protest and violence, while hospitals treating the wounded are considered fair game during times of political turbulence.

"An attack is not only felt by the 150 or 200 kids in a particular community school, but by all the kids in the surrounding area." -- Zama Coursen Neff

But perhaps the most disturbing trend in modern warfare is the rise in attacks on educational institutions, the cradles of any country’s future.

In the most exhaustive account of the issue to date, the Global Coalition to Protect Education from Attack (GCPEA) Thursday released a 250-page report detailing attacks on schools, universities, teachers, students and academics, by both state and non-state actors.

Covering the five-year period from 2009-2012, and following on the heels of less comprehensive studies put forth by the United Nations Educational, Scientific and Cultural Organisation (UNESCO) in 2007 and 2010, “Education Under Attack 2014” documents threats and the deliberate use of force against those involved in educational activities for “political, military, ideological, sectarian, ethnic or religious reasons.”

The findings are grim: in the last half-decade, hundreds of school children have been killed or maimed, many more kidnapped or forcibly enlisted into armed groups as combatants, sex-slaves or labourers, and hundreds targeted for assassination (as with the now iconic case of 15-year-old Malala Yousafzai, who survived an attack on her life by the Pakistani Taliban in 2012). 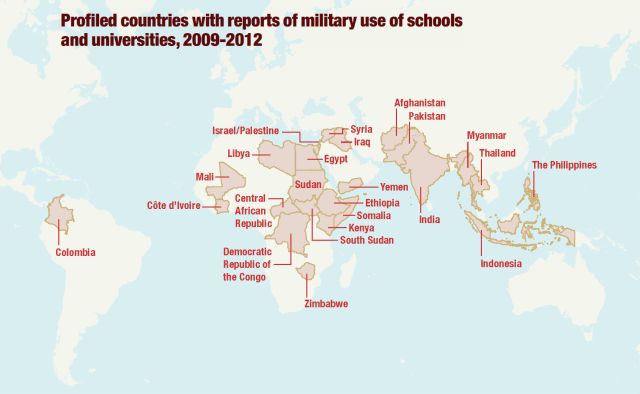 Scores of teachers have been killed or attacked, while thousands of school buildings and other educational institutions either reduced to rubble in bomb blasts, or commandeered by armed groups or military personnel as makeshift shelters and barracks.

The number of students denied the right to an education as a result of such attacks runs into the hundreds of thousands, experts say.

“This is an underestimated phenomenon,” Zama Coursen Neff, executive director of the children’s rights division of Human Rights Watch, told IPS, “especially when you consider the fact that an attack is not only felt by the 150 or 200 kids in a particular community school, but by all the kids in the surrounding area.

GCPEA - a coalition comprising the Council for Assisting Refugee Academics (CARA), Human Rights Watch, the Institute of International Education, Protect Education in Insecurity and Conflict, Save the Children, the Scholars at Risk Network, UNESCO, UNHCR and UNICEF – is now circulating the Draft Lucens Guidelines for Protecting Schools and Universities from Military Use during Armed Conflict.

Initially compiled in the village of Lucens, Switzerland, in November 2012, the document urges all parties to armed conflict to refrain from utilising schools and universities for military purposes, and encourages use of the Guidelines for responsible practice during times of conflict.

Coursen Neff hopes that members of the U.N. Security Council will use next Friday’s debate on children and armed conflict to speak more forcefully against schools and teachers being targeted as tactics of war.

“It is time states adopted really clear rules that say what militaries can and cannot do,” she stressed.
“We are only just beginning to understand the ripple effects of these attacks.”

She said the report, which drew heavily on a wide range of sources – from U.N. and human rights reports to in-country research – uncovered numerous reasons for attacks, including the desire to discredit a government or exert control over an area; prevent girls from going to school in violation of religious beliefs or cultural practices; block certain languages of instruction; and even to quell teacher trade union activity or academic freedom.

Just a few months earlier, some 200 Buddhist nationalists set fire to a Muslim school in Meiktila, in central, Myanmar, beating and torching students and even beheading one. By the time the mob’s fury was spent, 32 students and four teachers lay dead in the schoolyard.

Of the 70 countries identified in the report, 30 showed a pattern of deliberate and systematic attacks on schools, teachers and educational institutions, with Afghanistan, Pakistan, Colombia, Somalia, Sudan and Syria emerging as some of the worst affected countries, recording over 1,000 attacks apiece between 2009 and 2012.

Adding to its list of woes, Colombia now stands as one of the most dangerous countries in the world for teachers – 140 lost their lives in the last four years and 1,086 others received death threats.

Armed groups in Pakistan were responsible for the destruction of 838 school buildings, and the deaths of 20 teachers and 30 students.

Meanwhile the civil war in Syria has interrupted regular schooling for some three million students, with UNICEF reporting that “at least 20 percent of schools inside the country” no longer function as educational institutions.

Countries like Côte d’Ivoire, the Democratic Republic of the Congo, Iraq, Israel/Palestine, Libya, Mexico and Yemen fell into the category of “heavily affected”, with anywhere from 500 to 999 reported attacks on educational institutions and personnel.

The largest number of higher education student casualties in the world was recorded in Yemen – in 2011 alone 73 students lost their lives and a further 139 suffered injuries.

The report also highlights various “response and prevention tactics”, including better monitoring, assessment and reporting on attacks; enhanced security on the ground; and community responses to violence and destruction.

While the latter is often a risky undertaking, leaving community members vulnerable to retaliatory attacks, it has also resulted in successful negotiations, according to GCPEA Director Diya Nijhowne.

“In Nepal, school management committees agreed to codes of conduct with Maoist fighters to make schools zones of peace,” she told IPS. “In [the Central African Republic] a priest was involved in facilitating negotiations between rebel forces who targeted schools and government forces which resulted in the rebels returning home. Moreover, negotiations between NGOS and the People’s Army for the Restoration of Democracy (APRD)  effectively ended the use and occupation of schools in some villages.”

Such efforts are small steps towards a more lasting solution, but have the potential to create a different kind of ripple effect, one that returns education to its sacred place in human society.