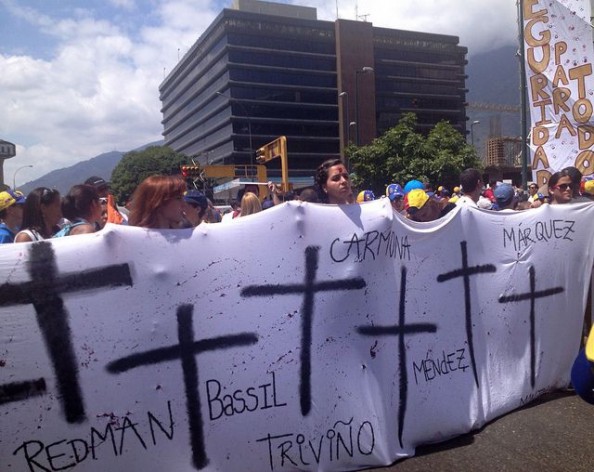 Relatives and students march with a banner naming people killed in the protests, in a mass opposition demonstration in Caracas on Saturday Feb. 22. Credit: Estrella Gutiérrez/IPS

CARACAS, Feb 27 2014 (IPS) - Fifteen dead, dozens injured, some 500 arrested and denunciations of torture, illegal repression by security forces and irregular groups and attacks on the press are the fruits of over two weeks of political confrontation in the streets of some 30 Venezuelan cities.

The state “has tossed the United Nations basic principles on the use of force and firearms [approved in Havana in 1990] into the waste bin, with regulatory bodies like the Public Prosecutor’s Office and the Ombudsman’s Office treating them with contempt,” Marino Alvarado, coordinator of the human rights organisation Provea, told IPS.

"In the absence of the state, parapolice bands control certain urban spaces, call themselves collectives and act as an armed wing of the government..." -- Luis Cedeño of Paz Activa

According to eye-witnesses, press investigations and videos circulating on the social networks, several protesters were shot to death by plain-clothes police, by armed groups that intimidated protesters and initiated violent incidents, or by pellets allegedly fired by members of the militarised Bolivarian National Guard.

One of the fatalities, on the morning of Monday Feb. 24, was 34-year-old Jimmy Vargas, who was allegedly attacked with pellets and tear gas by members of the National Guard. He fell from the second floor of a building in San Cristóbal, the capital of the state of Táchira, in the southwestern Andes mountains on the border with Colombia.

To defuse the crisis, President Nicolás Maduro decreed a holiday from Thursday Feb. 27, the 25th anniversary of the protests that left more than 300 dead in Caracas in 1989, to Mar. 5, the first anniversary of the death of former president Hugo Chávez (1999-2013).

This week pro-government and opposition demonstrations continued, and looting and vandalism broke out in cities like Maracay, in the north.

On Sunday Feb. 23 systems engineer Alejandro Márquez was killed, allegedly beaten to death by national guards when he was using his mobile phone to film incidents near a barricade in central Caracas.

Victims of acts of vandalism by demonstrating groups are also among the dead.

On Friday Feb. 21, 29-year-old supermarket worker Elvis Durán died on returning to his home on his motorbike and collided with a wire apparently strung by opposition activists across the street where he lived.

In Valencia, an industrial city west of Caracas, among the denunciations of torture was the story of Juan Carrasco, who was sodomised with a rifle barrel. “My son was brutalised, raped, humiliated by the soldiers in green. They destroyed his life and that of other youngsters,” complained his mother, Rebeca González de Carrasco.

Geraldine Moreno Orozco, a student, died from pellets fired at point-blank range into her face, after she had already fallen to the shots.

In several cities there were reports that young detainees were soaked with gasoline and threatened with being set alight, or were tortured with electric prods. There were also reports of security agents throwing tear gas canisters into homes.

The first protesters to be killed, at the end of a march in Caracas on Feb. 12, died in shooting involving members of the Bolivarian Intelligence Service (political police) who were disobeying an order of confinement to barracks, President Maduro said.

Maduro claimed that 30 people have died because the “guarimbas” (barricade shelters) have prevented them from receiving timely medical care.

The wave of demonstrations began on Feb. 6 in the capital of Táchira province with a student protest against crime, after the attempted rape of a university student on campus.

The protests expanded when the initial demonstration was harshly put down. In the subsequent demonstrations against the repression, some hotheads threw stones at the residence of Táchima Governor José Vielma, a retired soldier and member of the ruling United Socialist Party of Venezuela (PSUV).

Three young men were apprehended, prosecuted and sent to a prison in the northwestern city of Coro. As a result, student protests demanding their freedom spread like wildfire to other cities, and in the Andes region local people turned out in their thousands in solidarity.

On Feb. 12, Youth Day in Venezuela and the bicentennial of a battle in the war of independence, student movements organised marches all over the country, and a sector of the opposition coalition Mesa de Unidad Democrática (Democratic Unity Roundtable), led by Leopoldo López, called for “The Exit” of Maduro’s government.

There were huge rallies led by young people and the middle classes, which political analysts say are motivated by discontent with the government’s erratic policies in the face of the shortage of basic products, inflation and surging crime.

Although the vast majority of demonstrations are peaceful, some are accompanied with stone-throwing, setting fire to improvised barricades built of trash set up in the streets, and other acts of vandalism.

The government issued an arrest warrant for López, of the small centre-right opposition party Voluntad Popular (Popular Will), accusing him of inciting unrest and street violence by calling for “The Exit”. He gave himself up in front of crowds at a rally in Caracas.

Meanwhile, combat planes and military helicopters were sent to Táchira where they overflew the street demonstrations. A parachute battalion was dispatched to clear access roads to San Cristóbal.

A novel element that has emerged is the armed “collectives,” irregular groups usually on motorbikes, who clash with protesters and create trouble in opposition residential areas in cities like Caracas and Mérida (in the southwest), shooting at or destroying vehicles and windows.

In Alvarado’s view, they are “leftwing paramilitaries” who hide behind the cloak of social work in the shanty towns of Caracas and other cities but exercise violence in favour of the government. Maduro has warned against “demonising the collectives” and has praised them in a number of his speeches.

Not all Chavista (supporters of the president Hugo Chávez, 1999-2013) or revolutionary (pro-government) collectives are armed and violent.

Luis Cedeño of Paz Activa, an NGO which works on security issues, told IPS that “in the absence of the state, parapolice bands control certain urban spaces, call themselves collectives and act as an armed wing of the government, in order to benefit from a certain amount of legitimacy and impunity.”

Disarming and dissolving these collectives has become a rallying cry of the opposition.

Alvarado criticised “the Public Prosecutor’s Office and the Ombudsman’s Office, which should act ex officio, but have turned a deaf ear, improperly issuing opinions ahead of time in favour of the government and blaming opposition leaders, and also remaining silent when evidence was contaminated by executive branch officials.”

Rodríguez and Alvarado deplore the violations by security forces and other public powers of the Law to Prevent and Punish Torture, approved unanimously by parliament less than a year ago.

“There is no torture in Venezuela,” Maduro said at a press conference on Saturday Feb. 22.

The media have also taken some punches. Journalists’ organisations have denounced 62 cases of aggression during the protests this month. Colombian cable news channel NTN24 was pulled off the air and the same threat hangs over CNN en Español.

In Alvarado’s view, the Southern Common Market (Mercosur) made up of Argentina, Brazil, Paraguay, Uruguay and Venezuela, and the Union of South American Nations (UNASUR) “could make a contribution as mediators, based on the clauses in favour of democracy, human rights and political dialogue in their founding documents.”