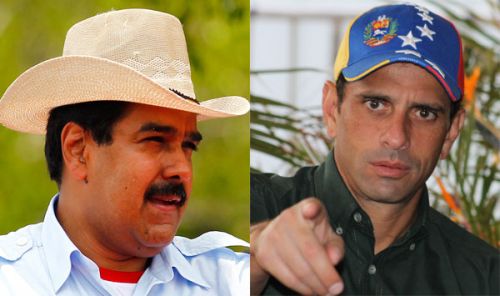 CARACAS, Apr 15 2013 (IPS) - The political polarisation in Venezuela became even more marked as the country emerged from Sunday’s elections basically divided in half, between two sectors that are antagonistic and reluctant to try to understand each other.

Nicolás Maduro, of the leftwing governing United Socialist Party of Venezuela (PSUV),
the political heir to late President Hugo Chávez (1954-2013), won the elections with 7,559,349 votes, or 50.75 percent, the National Electoral Council announced after counting 99 percent of the ballots.

But the results were challenged by his main rival Henrique Capriles, the candidate of the heterogeneous opposition coalition, the Mesa de Unidad Democrática (MUD), who garnered 7,296,876 votes, or 48.98 percent. He said he would only accept the outcome of a total recount.

The opposition say there were 3,200 cases of irregularities. They are also demanding scrutiny of some 60,000 ballots cast by Venezuelan voters abroad.

Maduro immediately accepted the call for a recount, although he said: “We have a just, legal, constitutional and popular electoral triumph. We respect the seven million who voted for the opposition; you must respect our seven and a half million.”

The candidate, who has been acting president since Chávez died of cancer on Mar. 5, called for “peace,” and said “I believe in peace as the path to prosperity and socialism.”

He added that “a new stage in the Bolivarian revolution is starting, with greater efficiency, honesty and popular power, for an in-depth rectification.”

Capriles said he would resort to “all constitutional means” to challenge the results. “Electoral irregularities are part of a system that is crumbling like a sand castle,” he maintained.

Groups of voters demonstrated outside of government offices in several provincial cities Monday to demand that the National Electoral Council carry out a recount.

“The game isn’t over yet,” said Capriles, adding that “the government should reflect on what kind of country we have,” in view of the narrow margin.

Under the constitution, the winner of Sunday’s elections will complete the 2013-2019 term to which Chávez had been reelected on Oct. 7 with nearly 8.2 million votes – 55 percent – compared to Capriles’ 6.6 million – 44 percent.

Sunday’s results indicate that the opposition gained nearly 700,000 votes compared to the October elections, while Chavismo lost a similar number.

“Chavismo is no longer the overwhelming force it was for 14 years (since Chávez won for the first time in 1998) and it leaves the country politically split now exactly in half,” sociologist and political analyst Tulio Hernández told IPS.

In any democratic country, “even a narrow win, like Maduro’s, would grant legitimacy, but would require a forging of channels to reach governance pacts with the opposition,” said Hernández. “But this government with authoritarian and statist tendencies won’t do that,” he added.

Carlos Romero, professor of graduate studies in political science in several universities, said he preferred “not to talk about a divided country, but about one represented by two sectors. And the fact that Maduro did not have a comfortable majority doesn’t mean he won’t be able to govern.”

“Of course, for Maduro himself it would be beneficial to recognise that the other half exists, and extend bridges of understanding, because he should take measures in the face of the country’s basic problems like inflation, shortages, drug trafficking and insecurity,” Romero told IPS.

Hernández said Sunday’s elections “show a distancing from Chávez as the big political landmark, with the forces aligned depending on their proximity to or distance from him. They also drew a new political map.”

He pointed out that Capriles won in several of the most populous states with the most commercial and industrial activity, in Caracas and in the 10 biggest provincial capitals, while Maduro was victorious in smaller towns and rural areas.

“The equation is that Chavismo won wherever there is more poverty, more rural population and greater dependency on the state as a source of resources, and Capriles triumphed where there is more private sector activity, higher incomes and more urban life,” the analyst said.

Hernández believes Chavismo will become, in the absence of its late leader, a large political force, but lacking in ideology, “because Chávez’s was like a patchwork quilt,” without a solid party of the kind the communists, social democrats or Christian democrats have, and with several different leaders who could invoke the words of Chávez in different ways.

Diosdado Cabello, the first vice president of the PSUV and the leader of the retired military officers who supported Chávez, has already stated that “we must carry out a critical and self-critical review of why so many poor people continue to vote for the candidates of the bourgeoisie.”

The opposition as well, according to Hernández, “now that it is a real alternative with possibilities of governing, has the challenge of giving greater consistency to the amalgam of parties that comprise it and conducting an ideological debate to figure out what it offers the country in terms of state, market, private property, oil and the fight against exclusion and poverty.”

On the international front, there was an unusual break with the traditional automatic recognition of the results and greetings to the winner.

Governments allied with Chávez, such as those of Argentina, Bolivia, Cuba and Ecuador, in Latin America, as well as China and Russia, immediately congratulated Maduro. But others, like the governments of the United States, Spain and France, as well as European Union and Organisation of American States officials, urged a recount.

“The results have surprised the international community,” said Romero. “Most of the governments expected a comfortable win by Maduro, and now it is time for them to reflect on why they did not take a position that was equally distant from the two political camps.”