WASHINGTON, Mar 10 2014 (IPS) - The multinational food giant Mars, Inc. unveiled Monday a new set of guidelines aimed at ensuring that its palm oil supply lines are completely traceable and sustainable by next year.

Global demand for palm oil has increased substantially in recent years, for use in both foods and household goods. Yet the industry, overwhelmingly centred in Malaysia and Indonesia, has been rife with environmental and labour problems.

"This isn’t an activist-led commitment. They’re doing it because they want to do it." -- Bastien Sachet

Recent months, however, have seen a cascade of major reform commitments from both palm oil suppliers and well-known consumer brands such as Mars.

“Rapid expansion of palm oil plantations continues to threaten environmentally sensitive areas of tropical rainforest and carbon-rich peatlands, as well as the rights of communities that depend on them for their livelihoods,” Barry Parkin, chief sustainability officer at Mars, best known as the maker of M&Ms and other candies, said Monday.

“We believe that these additional measures will not only help build a genuinely sustainable pipeline for Mars, but will also help accelerate change across the industry by encouraging our suppliers to only source from companies whose plantations and farms are responsibly run.”

Under the new guidelines, Mars will require that all of its suppliers have in place sourcing plans that are both fully sustainable and fully traceable by the end of this year, to be implemented by the end of 2015. The company, headquartered just outside of Washington, is also instituting a “no deforestation” pledge for its palm oil supply as well as its sourcing of paper pulp, soy and beef.

“Four years ago, Nestle decided to go for full traceability and no deforestation, but at the time that decision was seen as very niche because it was being pushed by environmental activists,” Bastien Sachet, director of the Forest Trust, a global watchdog group that focuses on responsible products and whose newest member is Mars, told IPS.

“The great thing about Mars, particularly in their push against deforestation across commodities, is that this isn’t an activist-led commitment. They’re doing it because they want to do it, which means that they see what’s happening.” 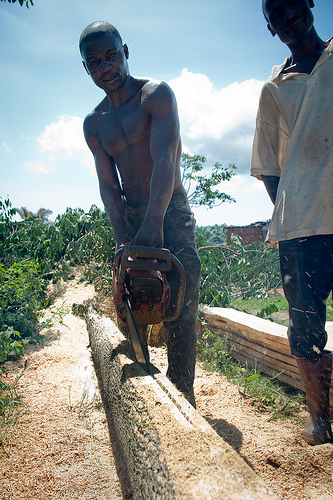 Workers on Bugala Island work to clear the rainforest to make way for an expanding palm tree plantation. Palm oil production is one of Uganda’s rising industries. Credit: Will Boase/IPS

In this, Sachet refers to a growing trend from both palm oil supply companies and major consumer brands to recognise that previous industry certification efforts to clean up palm oil supply lines have been relatively ineffective. Ensuring the traceability of palm oil, on the other hand, turns this certification model upside-down.

“Over the last four years, the general public, industry and the brands have struggled to make progress on sustainability with the tool of certification. Meanwhile, we saw forests being trashed in Malaysia and Indonesia, a process that’s also beginning in Africa,” Sachet says.

“But now they’re realising that certification is not the only way to go. Instead, we can get traceability first, figure out where it’s coming from and then figure out what’s happening around its production. Eventually we can incentivise those guys who are doing well with more market share – and penalise those that aren’t.”

While much of the industry is currently based in Southeast Asia, many observers point to looming problems in Africa, where land is starting to be snapped up by speculators. Yet Sachet says the new policies being put in place by the global food industry could be laying the grounds for finding a balance between development and conservation throughout the palm oil industry.

A voluntary certification process for responsible palm oil production, known as the Roundtable on Sustainable Palm Oil (RSPO), has been in effect for a decade, and most of the major users of palm products do abide by its guidelines. Yet it’s become increasingly clear that RSPO certification has been unable to halt the industry’s mass deforestation and destruction of endangered habitat.

Mars’s Parkin notes that his company “recognised that even though we have already implemented a 100% certified supply of palm oil, this is not enough.”

Other major brands have made similar realisations in recent months, including Unilever, Hershey, Kellogg and L’Oreal. Perhaps more critically, this trend has now included some of the largest global palm oil suppliers, including Wilmar (in December) and Golden Agri Resources (GAR, just last week).

Wilmar alone accounts for more than 40 percent of the global palm oil supply. Altogether, companies controlling a bit more than half of that supply have now committed to having their products be deforestation free by 2015.

As recently as the middle of last year, that figure was zero.

“There has been progress and I definitely think we’re on the right track, though there’s still a long way to go,” Calen May-Tobin, lead analyst for the TropicalForest and Climate Initiative at the Union of Concerned Scientists (USC), a watchdog group here, told IPS.

“It’s also important to remember that these are still just public commitments. The action happens when these commitments get turned into policies and are actually implemented.

Last week, UCS released a scorecard that rated palm oil-related sustainability progress by the packaged food, fast food and personal care industries. May-Tobin, who was a co-author on the new report, notes that much of the new public pressure has been aimed at the packaged-food companies.

“On the one hand, it’s clear that when consumers speak up, these companies listen. On the other hand, I think the report’s major finding was how poorly the fast-food sector did,” May-Tobin says.

“Further, there are still a number of other large traders that now need to follow Wilmar and GAR’s example. We think the consumer companies are equally key in helping drive the traders, as the average consumer doesn’t necessarily know who Bungee or Cargill is, but they know Hershey and Mars.”

Advocacy groups are using the recent momentum to urge holdout companies to unveil their own commitments. Greenpeace, the group widely credited with pushing Nestle to make its landmark pledges in 2010, is currently focusing on the U.S. consumer-goods giant Procter & Gamble (P&G).

“Mars joins a growing list of companies … that are finally promising forest-friendly products to their consumers. It shows that global public pressure is working, and is leaving P&G, which refuses to clean up their supply chains, increasingly isolated,” Areeba Hamid, forest campaigner at Greenpeace International, said Monday.

“P&G is relying on a certification scheme that has failed to prevent rainforest destruction in the habitat of endangered orangutans, or help reduce man-made fires like the ones that covered Singapore in smog last summer. It’s time P&G finally becomes proud sponsors of rainforests and commits to No Deforestation.”