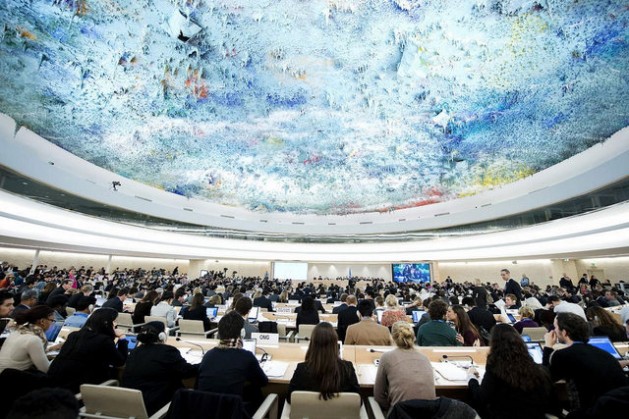 GENEVA, Mar 28 2014 (IPS) - The bloody events that marked the end of Sri Lanka’s civil war between government and Tamil separatist forces will be the focus of an independent international investigation, according to a United Nations Human Rights Council decision.

The serious human rights violations denounced by U.N. agencies are blamed on both sides. The inquiry will cover the abuses committed during the final period of the 1983-2009 war and after the government’s victory.

Juliette de Rivero, Geneva director of Human Rights Watch, told IPS that nearly five years on, the victims are still awaiting justice and for those responsible to be held to account.

“There are still no answers for the up to 40,000 civilian deaths for the last months of the fighting in Sri Lanka, nor for the 6,000 forcibly disappeared,” she said.

The Sri Lankan government rejected the Human Rights Council resolution adopted Thursday Mar. 27 on the argument that it erodes the sovereignty of the people of Sri Lanka and the core values of the U.N. Charter, the Universal Declaration on Human Rights and the basic principles of law that postulate equality among all people

The resolution was approved with a 23 to 12 vote, with 12 abstentions.

Tamil leaders following the debate in Geneva, where the Council is based, were not completely pleased with the resolution either.

One of the leaders, Visvalingam Manivannan, told IPS that “Our most pressing concern is that the High Commissioner’s (Navi Pillay) report or the resolution say nothing to halt the ongoing genocide against the Tamil nation.

“We are of the opinion that this can only be achieved through the establishment of a U.N.-sponsored transitional administration (in Sri Lanka) established through the aegis of the U.N. Security Council,” said Manivannan, who represents Vigneshvssu Vssu Vssu, an NGO in Special Consultative Status with the U.N. Economic and Social Council.

The case of Sri Lanka has been unusual in terms of the alignments it triggered among the Human Rights Council’s 47 member countries.

Alongside Sri Lanka, Pakistan took the lead in protesting the resolution, with outspoken support from China and Russia.

This time, Colombo lost the backing of three key Asian nations: India, Indonesia and Japan, which abstained from voting.

The North-South divide that persists in the Council, as in other multilateral bodies, was blurred in this case. Of the 13 African nations, three voted in favour of Sri Lanka, four voted for the U.S.-sponsored resolution and the remaining six abstained, including South Africa.

Among the Latin American members, there was no middle ground. Cuba and Venezuela voted against the resolution and defended the arguments set forth by the Sri Lankan ambassador.

Meanwhile, Argentina, Brazil, Chile, Costa Rica, Mexico and Peru aligned with Washington. “We did it to end the impunity,” a diplomat from one of these countries told IPS.

“A majority of the 47 members of the Human Rights Council -12 countries opposing and 12 other countries abstaining – has made it clear that they do not support the action taken by the United States, the UK and the co-sponsors of this resolution to impose an international inquiry mechanism concerning Sri Lanka.”

The resolution noted that in her report, the high commissioner had concluded that Sri Lanka’s national justice system and human rights mechanisms had systematically failed in their duty to discover the truth and deliver justice.

The Council thus accepted Pillay’s recommendation that an international inquiry be launched to carry out an in-depth investigation.

A leader of the Tamil National People’s Front (TNPF), Gajendrakumar Ponnampalan, told IPS that “The remedy for violations at the level of gravity that occurred ultimately cannot be anything short of a credible international investigation and a judicial process through the ICC (International Criminal Court) or an Ad Hoc special tribunal.”

A group of experts appointed by U.N. Secretary-General Ban Ki-moon concluded that Sri Lankan government troops were involved in widespread abuses, including indiscriminate bombing of civilians, summary executions and rapes.

From 80,000 to 100,000 lives were claimed by the civil war between the Sri Lankan army and separatists demanding a Tamil state in the north of the island.

The conflict came to an end when the leader of the Liberation Tigers of Tamil Eelam, Velupillai Prabhakaran, died in the fighting.

The U.N. Council resolution called on the Sri Lankan government to carry out a credible independent investigation of the allegations and to put an end to human rights abuses in the South Asian country.

Ponnampalan said “There is an ongoing genocide carried out by the Sri Lankan state, whose goal is the de-Tamilisation of Sri Lanka.

“Any reconciliation project has to include the Tamil nation – smaller in number on the island – and the Sinhala nation – a majority within the current configuration of the Sri Lankan state,” the TNPF leader said.

But “The Sinhala nation has no intention of ‘reconciling’ with the Tamil nation and wants it to assimilate into its vision of a Sinhala Buddhist Sri Lanka,” he maintained.

“Indeed, the only ‘remedy’ for the Tamil people in Sri Lanka is fleeing or assimilation,” he argued.