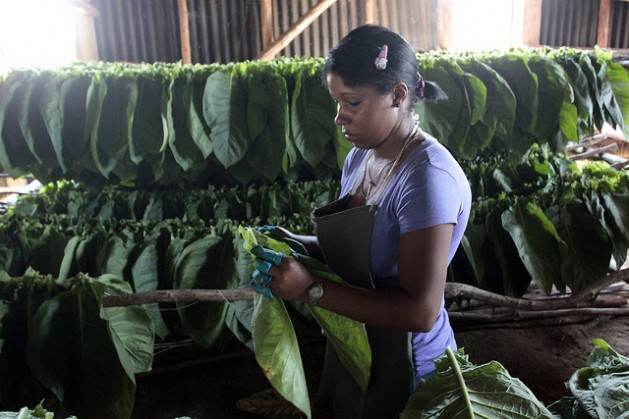 Yamilé Venero strings tobacco leaves onto long poles for natural curing on the Valle farm, in the municipality of San Juan y Martínez, the centre of production of this preeminently Cuban crop. Credit: Jorge Luis Baños/IPS

SAN JUAN Y MARTÍNEZ, Cuba, Mar 6 2014 (IPS) - Near the close of the harvest , local people in the Cuban municipality of San Juan y Martínez, which boasts the finest tobacco plantations in the world, are seeing their hopes of a plentiful season dashed by unexpected winter rains.

“It’s been a bad year, a rebellious one as we call it. There was a lot of rain, which rots the plants. Tobacco needs sun during the day and cold at night,” 67-year-old Dámaso Rodríguez, a worker on the Valle plantation in this municipality, 180 kilometres west of Havana, in the province of Pinar del Río, told IPS.

“We are late with the farm chores,” said Yamilé Venero, a young tobacco worker on the same plantation. “It’s not worth planting again,” added María Teresa Ventos, a 54-year-old woman who comes every season to string the tobacco leaves onto long poles for drying in this agricultural industry which is a source of temporary jobs for women.

Since November, when the season started, there has been too much rain in the province which was expected to supply 70 percent of the 26,400 tonnes of tobacco leaf forecast for the 2013-2014 harvest. San Juan y Martínez and the neighbouring municipality of San Luis were severely affected; between them they provide 86 percent of the tobacco for the prized and costly Havana cigars.

Local sources reported the loss of 813 hectares in Pinar del Río and partial damage in a further 1,000 hectares, out of the provincial plan for 15,000 hectares. Many farms had to uproot their tobacco plants and replant three times over.

Tobacco is Cuba’s third export, after nickel and medical products.

In 2013, the country earned 447 million dollars from tobacco, eight percent more than in 2012 when the Anglo-Cuban corporation Habanos S.A. made 416 million dollars. It is the sole vendor of Cuban cigars worldwide, trading in 160 countries, with most of its business in Europe, although cigars are doing well in Asia and the Middle East.

The storm clouds over Pinar del Río, in the west of the country, may hurt sales this year, along with other problems like tough anti-tobacco laws in Europe and the economic blockade imposed by the United States on Cuba because of the of conflict between Washington and Havana that has gone on for half a century.

To weather the damage done by the downpours, plantations in Pinar extended their planting season, which usually ends in January, by 45 days, and delayed other major tasks of the current tobacco harvest. They have also resorted to harvesting “capadura” (lower quality) leaf and plant regrowth, in order to maximise production.

On the Valle plantation, 12 skilled men continue to harvest tobacco leaves and take them to a high-roofed wooden barn at one side of the estate. Inside, 12 women string the leaves in bunches and arrange them on long poles which are then hung in tiers right up to the slanted roof for traditional curing (controlled drying) in air.

“After all, the tobacco is good quality, but not as good as before,” Rodríguez said. This veteran tobacco grower, the son and grandson of peasant farmers, is concerned that the strange weather in his birthplace “is no longer the same” as it was three decades ago.

The unique combination of temperature, soil and humidity in the Vuelta Abajo region, in the west of the province, is essential for the development of the best handmade premium cigars on the planet, a process that involves close to 190 different operations.

Only here can all the types of leaf be grown that are used in making cigars, the successors to the rolled leaves smoked by native people on the island of Cuba when Spanish colonists arrived in 1492.

Dayana Hernández and Aliet Achkienazi, researchers at the state Meteorology Institute, have forecast that this territory will become warmer every decade this century, unsettling the conditions that give Cuban cigars their exclusive taste, aroma and texture and have earned them their protected designation of origin (PDO).

The PDO protects agricultural products that have a quality and characteristics fundamentally or exclusively due to geographical factors in their place of origin. In this case it is reserved for cigars of over three grams, made in Cuba according to traditional methods from varieties of Cuban black tobacco.

On the basis of future climate scenarios, the authors forecast that rising temperatures will not cause great harm in the next few decades, but later on, as warming increases, crop yields will decline. However, in the north of the area they studied, the climate will be more stable and it is less likely that temperatures will exceed 25 degrees Celsius.

The study found that “the impact of climate change can be mitigated in conditions compatible with the sustainable development” of the delicate tobacco leaf. It recommended “further research” into the effects of imbalances in the rainfall patterns on the plantations.

The experienced eye of Francisco José Prieto, the manager of the Valle plantation, who owns 4.5 hectares that have belonged to his family since his grandfather’s days, led him to take steps ahead of the inclement weather.

He planted early, and was already harvesting “when the rains intensified,” he told IPS. “I didn’t have to replant,” said this member and president of the Tomás Valdés Credit and Services Cooperative (CCS), which groups 50 farms in Vuelta Abajo.

The CCSs were created in the 1960s as voluntary associations of small farmers who retain ownership of their land, and gain collective access to technologies, financing and sales facilities for their products.

But in spite of his efforts, Prieto doubts whether this harvest will be as good as the last, when his farm produced 158 quintals (7,272 kilos), a record result.

Prieto uses soil conservation techniques on his land. He sprays the tobacco only once, and after the harvest, he plants crop varieties that improve the soil, like maize and jack beans. “They provide shade, conserve nutrients that otherwise would be washed away by the rains, and they are dug in as a green manure,” he said.

The 44,863 people living in San Juan y Martínez, on large estates dotted with simple houses with light roofs, depend on the success of each tobacco harvest. “We are paid fixed wages, with bonuses for productivity,” union leader Celeste Muñoz told IPS.

Constantly working dry tobacco wrapper leaf from the last harvest on her roller, Muñoz, employed for the last 17 years in a centre for tobacco collection, selection and processing, said that her team of 50 women is trying to “recover as much dry leaf as possible.”

She is not sure whether it is “because of the climate, the fertilisers or the variety planted,” but she claims that the yield “is less than before. We got as many as 1,000 quintals (46,039 kilos) of dry leaf in one season,” she said nostalgically.