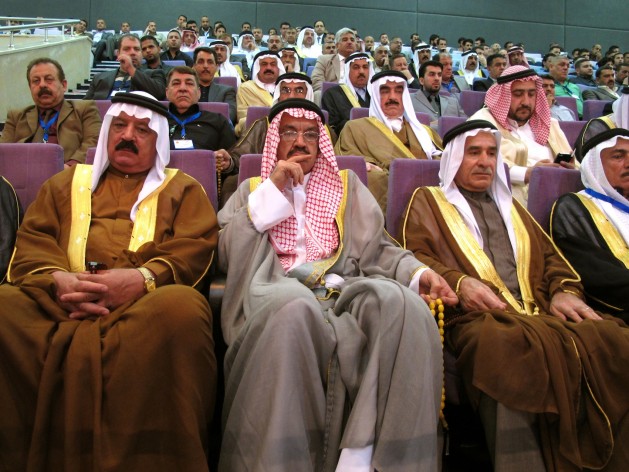 ERBIL, Iraqi Kurdistan , Apr 12 2014 (IPS) - Sunni Muslims have set up a new party amidst uncertainties as to whether elections can be held as scheduled in the troubled western regions of Iraq. Polling for the 328-seat Iraqi parliament is due Apr. 30.

Ahead of the scheduled election, tribal, political and religious leaders, and also lawyers, engineers and other professionals,  gathered in Erbil in the Kurdistan region of Iraq April 8 to set up a new party, Karama (Dignity).

Karama hopes to become an effective political voice for Sunnis, but Jassim cautions that Karama is a project “in the long-term”.

The Sunni Arabs came from several western towns of Iraq, where fighting and unrest have not yet ended, 11 years after former Iraqi president Saddam Hussein was toppled.

No bloc is expected to get a majority but Prime Minister Nouri al-Maliki is the favourite to lead. Shia Arabs are split between the prime minister’s State of Law party, the Sadrist Movement and the Islamic Supreme Council of Iraq.

Karama candidate Afifa Agus al-Jumaili says a third consecutive term for Maliki would be “disastrous” for all Iraqis.

“The Sunni provinces of Iraq have turned into a combat zone between tribal militias, Al-Qaeda and Maliki’s Shias,” Jumaili tells IPS. She sees Karama as the “only chance for Sunni Iraqis of all walks of life to get back their rights and dignity.”

Karama is among 276 political entities approved by the Independent High Electoral Commission to contest the election. It’s among several parties looking to win over supporters of the now fragmented secular and Sunni Iraqiya coalition. That coalition won the last elections but was ousted by a Shia coalition, that brought Maliki to power.

The Sunni population is variously estimated to be 20 to 40 percent of Iraq’s population of 32 million. Sunnis have been complaining of increasing marginalisation by the predominantly Shia political leaders.

“The sad irony of all this is that we are forced to gather in the Kurdish Autonomous Region of Iraq because an event like this is simply not feasible in Arab Iraq,” says Jumaili.

Despite their initial opposition to a federal model for the country, Iraqi Sunnis have increasingly been demanding an autonomous region similar to that for the Kurds.

Jumaili is originally from Hawija town 230 km north of Baghdad. Apr. 23 will mark a year since Iraqi special forces killed 51 protesters in this town. At least 215 more were killed in violence that followed.

In its World Report 2014, Human Rights Watch says security forces “responded to peaceful protests with threats, violence, and arrests, using lethal force on demonstrators who had been gathering largely peacefully for five months.” It spoke of “arbitrary and often massive arrests.”

Following the killings, anti-government protests picked up new momentum, after December 2012 after several bodyguards of Finance Minister Rafie al-Issawi, the highest-ranking Sunni Arab in the cabinet, were arrested on suspicion of engaging in terrorism.

Sunnis are functionally excluded from government. The few who participate are coopted by Maliki.

The protests for rights and over the deaths has dragged the west of the country into unprecedented chaos since the peak of sectarian violence between 2006 and 2008.

Among the most prominent protesters is Ghanim Alabed, a resident of Mosul town about 400 km northwest of Baghdad.

“Mosul has become a real nightmare over the last year,” Alabed, who has joined Karama, tells IPS. “Car bombs, kidnappings, killing of tribal leaders or simply ordinary civilians are sadly common currency among us, yet again.”

Alabed says most attacks are carried out by “either the army or Shia militias.” He says local journalists are increasingly being targeted. At least 50 journalists have been killed in Mosul alone since 2003.

The U.S. based Committee to Protect Journalists (CPJ) named Iraq the “worst nation” in its 2013 Impunity Index of unsolved journalist murders.

“I cannot set foot in Mosul, Baghdad or any other Arab part of Iraq because I know they will kill me straightaway,” says Alabed, who moved to Erbil with his family a few months ago.

His face is familiar to almost every Iraqi, and not just for his public appearances at many demonstrations. Cartoons portraying him as a terrorist leader have been shown on a government-funded TV channel.

“Americans had labelled all Sunni insurgents ‘Al-Qaeda’ and, today, Maliki still sticks to that line,” says Alabed. “But the truth is that most of us hate Al-Qaeda because we know that they are backed by Iran. Their sole aim is to destroy our society and prevent us from sharing power.”

The proof, he says, is that Islamic extremists hardly ever target Shias in his hometown.

The death toll is increasing by the day. Mera Faris Hassan, a tribal leader from Samarra, 130 km northwest of Baghdad, is mourning the death last week of Sheikh Juma al-Samarrai in his hometown.

Hassan tells IPS a curfew is in force in Samarra. He condemns constant attacks from both the government and unidentified groups.

“Through Karama we will struggle to get rid of policies meant only to justify repression against our people,” says Hassan. “We deserve to get back our legitimate rights as Iraqis.”

The emergency situation extends to virtually every Sunni area in Iraq. But Fallujah, 60 kilometres west of Baghdad, could well be facing the worst of the unrest.

Karama candidate Mohamed Jassim speaks of a mass exodus of civilians from Fallujah to Baghdad and Erbil. The situation in Fallujah, he says, is a “humanitarian catastrophe”.

“Every main road is blocked and the only way in and out is through secondary roads, and often on foot. The outskirts of the city are under the control of armed gangs but it’s difficult to know whether they are Al-Qaeda fighters or tribal militias because most are masked and carry no emblems.

“The biggest threat, though, comes from the constant bombings by the Iraqi air force,” the 44-year-old candidate tells IPS.

Karama hopes to become an effective political voice for Sunnis, but Jassim cautions that Karama is a “long-term” project. At this nascent stage and under the difficult circumstances it is hard to gauge whether Karama can emerge as a Sunni political force to contend with.