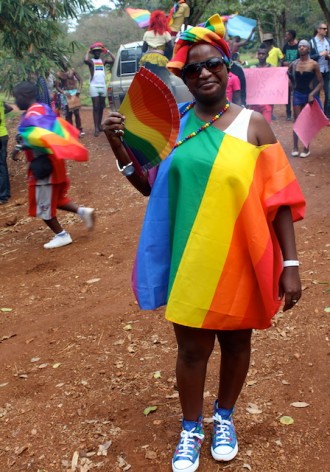 KAMPALA, Apr 23 2014 (IPS) - As she sits in a Kampala hotel holding a mobile phone that rings frequently, Sandra Ntebi tells IPS: “I’m really exhausted. I don’t know where to start. We have many cases pending.” Ntebi manages a hotline and is helping Uganda’s lesbian, gay, bisexual, transgender and intersex (LGBTI) community find alternative, safe accommodation after they have faced harassment.

“Right now, some people have been thrown out of their homes, some are in jail. Every day there are cases.”

Many activists had fled Uganda to seek asylum in different countries, while most LGBTI organisations were closed “due to fear”.

So far today Ntebi has received calls relating to four new cases concerning LGBTI people or those perceived to be LGBTI that include incidents of evictions by landlords, police arrests and mob attacks.

In total she and a colleague have received reports of about 130 different cases across the country since Museveni inked his signature on the Anti-Homosexuality Act 2014 in late February.

The law prescribes life imprisonment for some homosexual acts and also criminalises the “promotion of homosexuality”, among other measures.

“The situation is tense. Right now this act is promoting violence,” says Ntebi.

“I get the reports since I have the hotline. We sit down later with the details then categorise them into evictions, arrests and assaults.”

Today her co-worker has received a call about a new incident in Hoima, western Uganda. Among the cases Ntebi is dealing with is a fresh attack on Brenda, an HIV positive, transgender sex worker in her late 30s who lives just outside the capital, Kampala.

In March Brenda was “paraded” before local media, outed as a transsexual, beaten, undressed and arrested.

“We bailed her out, she went back to her house in the village and she couldn’t even leave because people were out every day waiting for her,” says Ntebi. “They were throwing stones.”

Brenda went to stay with a friend based on advice from the LGBTI hotline. Then on Thursday, Apr. 17, she was beaten again, taken to hospital and is now holed up in a hotel.

“We’re trying to secure a house for her to rent,” says Ntebi, who on Wednesday went to help Brenda.

Around Mar. 19, the same time that Brenda was first attacked, three Ugandan men who were perceived to be gay were assaulted and admitted to the Mulago Hospital in Kampala. A few weeks later, Ntebi says, the team were alerted to a possible suicide of an LGBTI person by an embassy.

On Apr. 3 crime intelligence officers raided the Makerere University Walter Reed Project clinic, a non-profit collaboration between Makerere University in Kampala and the U.S. Military HIV Research Programme. Police claimed the project, one of the few in Kampala willing to offer services to LGBTI people with AIDS, was “carrying out recruitment and training of young males in unnatural sex acts.”

Many activists and other members of the gay community are now in hiding, says Ntebi, who is wearing a black vest from a 2006 campaign run by Sexual Minorities Uganda (SM-UG), an NGO and the umbrella for all homosexual organisations in Uganda. The words “Leave me in peace” are embroidered on the back.

Ntebi says many activists had fled Uganda to seek asylum in different countries, while most LGBTI organisations were closed “due to fear”.

Ntebi now only goes to work at her office when it’s absolutely essential.

Beyondy is the nickname for a 23-year-old fashion designer who is in hiding.

He used to spend his days sewing a dress for a client or mastering routines for upcoming events, like the second Gay Pride parade in 2013.

Since the bill was signed he has moved to a tiny one-bedroom shack, tucked away at the back of a slum in a lively Kampala suburb. Beyondy now spends his days mostly indoors watching music videos by Beyoncé, Pink and Rita Ora, only going outside when he has to.

“I like Rita’s style – the blonde hair, her red lipstick,” cooes Beyondy, wearing a T-shirt and board shorts showing off his muscular build, when IPS met him recently.

“I wanted to be a performer, for people to see my talent and discover me. But right now I think it’s impossible. Right now it’s all about survival, saving your life and being quiet, being underground all the time.”

In the past Beyondy was attacked “a lot”, and fears he’ll be targeted again now that the anti-gay act is in force.

“You know someone was saying recently, ‘if we had a choice between forgiving a rapist and a gay person, we’d rather choose a rapist,’” he says.

Activists are hoping a petition filed in March challenging the act will come up in the country’s constitutional court early next month.

According to the Ugandan newspaper The Observer, the government has filed a defence, claiming the act does not contravene the right to equality and freedom from cruel, inhumane and degrading punishment guaranteed under the country’s constitution. The government wants the petition dismissed.

But even if the law is overturned Beyondy says it will take much more than a court ruling to change social attitudes towards homosexuality in Uganda.

In the current climate of homophobia, which activists stress has been “imported” to Uganda via western evangelists, virtually everyone is aware they can use another person’s sexuality to exact revenge.

“It’s in people’s minds and even if it’s overturned they’ll still think about it.”

But he’s adamant he will remain in Uganda to “rebuild both personally and professionally”.