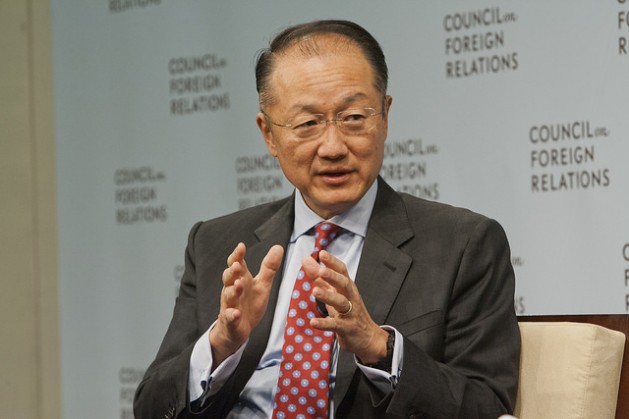 WASHINGTON, Apr 1 2014 (IPS) - The World Bank is aiming to double its lending to middle-income countries over the coming decade, in addition to expanding its overall commitments to some 70 billion dollars a year.

As part of a broad reform agenda unveiled last year by World Bank President Jim Yong Kim, the world’s largest development lender now sees a niche for itself, in part, in responding to the massive infrastructural needs in rising middle-income economies. On Tuesday, Kim lauded this expanded financing “firepower”.

“More lending by the bank should not further entrench a culture that measures staff performance on the basis of money out of the door.” -- Nicolas Mombrial

“We now have the capacity to nearly double our annual lending to middle-income countries, from 15 billion dollars to as much as 28 billion dollars a year,” Kim said in a speech to the Council on Foreign Relations, a think tank here.

“This means that the World Bank’s lending capacity, or the amount of loans we can carry on our balance sheet, will increase by 100 billion dollars in the next decade, to roughly 300 billion dollars.”

Kim characterises the prospects as “unprecedented growth” for the bank, based in Washington. The announcements came just ahead of semi-annual meetings between the bank and its sister organisation, the International Monetary Fund (IMF), slated to take place next week here in Washington.

While middle-income countries are expected to require less development assistance, Kim suggests that they will still be interested in accessing the bank’s low-rate loan options, particularly for infrastructure. Kim said infrastructure-related costs for the so-called BRICS middle-income countries alone are around a trillion dollars a year, whereas total global foreign assistance stands at just over a tenth of that figure

This gap, coupled with a new pledge to eliminate extreme poverty by 2030, will now lead the bank to focus in particular on 10 countries. These will include Bangladesh, China, Congo, India and Nigeria, where some two-thirds of the world’s extreme poor are located.

This focus will also take in an additional five countries – Ethiopia, Kenya, Indonesia, Pakistan and Tanzania. Together, these 10 nations house some 80 percent of the world’s poorest people.

“The bank is making use of existing resources more effectively to do not just a little more but a lot more. It’s hard to look at this and not be impressed with what they’re trying to pull off here,” Scott Morris, a senior associate at the Center for Global Development (CDG), a think tank here, told IPS.

“I give them credit both for having some degree of creativity and for navigating the politics with shareholders to pull these elements off. The issue of loan pricing is always very sensitive with borrowers.”

The new capacity comes on top of a record top-up for the World Bank’s fund for the world’s poorest countries, known as the International Development Association (IDA), which last year took in close to 52 billion dollars from its membership.

Yet unlike the IDA replenishment, the newly announced boosts will come largely from rejiggering the bank’s own lending rules, as well as from strengthening efficiency within its operations. “We are not getting a capital increase … we’re stretching our balance sheet as much as we possibly can,” Kim said Tuesday.

For instance, the bank will raise the limit imposed on the size of loans that each middle-income country is able to take out, by another 2.5 billion dollars. It will also be slightly increasing the interest rate imposed on those loans, as well as certain other fees.

Alongside these changes, Kim on Tuesday reiterated a new goal of saving 400 million dollars over three years through increased efficiency within the organisation, details of which are to be publicised in coming days.

CGD’s Morris, who previously oversaw engagement between the U.S. Treasury and the World Bank, says this plan is impressively inventive but could also be dangerous in the longer term.

“The bank is now sending a clear signal that they don’t feel the need to ask for more money from their shareholders, particularly from the United States and Europe,” he says.

“But this is an institution owned by country shareholders, and an important measure of their engagement with and attachment to the institution is its financial flows. If, for instance, U.S. financing continues on a steady decline, I think the relationship itself could also be on that kind of trajectory – and that would be unfortunate.”

The changes to the borrower limit and the new surcharge for large countries raise questions about how some of the smaller countries will fare, Morris worries. He also notes that much will depend on how the new budget cuts take place.

“If they’re pursuing budget cuts first and foremost to address the problem of budget bloat, then that’s absolutely necessary,” he says. “But if the starting point is to figure out how to find 400 million dollars to put towards increased lending, then you have to worry that they’re going to be cutting in areas that they shouldn’t be.”

Others, too, are calling for the World Bank to use the new reforms and goals as an opportunity to strengthen the criteria by which it rates the effectiveness of its own lending. The bank has long been criticised for focusing too much on the size of its lending rather than on the ultimate impact of that spending on reducing poverty.

“More lending by the bank should not further entrench a culture that measures staff performance on the basis of money out of the door,” Nicolas Mombrial, head of the Washington office of Oxfam International, an anti-poverty group, said Tuesday. “Development impact should be front and centre for the bank.”

Mombrial also notes that expanded development lending will require a strengthening of guidelines covering World Bank lending, in order to ensure that those programmes do not negatively impact on local communities and the environment.

“More money for development is good but the quality of World Bank lending needs to improve. This will be bad news for poor people if World Bank social and environmental standards are not improved,” he says.

“The bank’s private sector arm, the IFC, must be reformed if it wants to spend more and increase its development impact. More resources must be tied to better consultation and protection of communities affected by IFC investments.”

Worrying for some in this regard will be strongly positive comments Kim made Tuesday regarding new World Bank funding for a controversial hydroelectric dam on the Congo River, known as Inga III. Civil society groups have fiercely opposed the megaproject, but Kim lauded it as a prime example of the bank’s “bold” future plans.