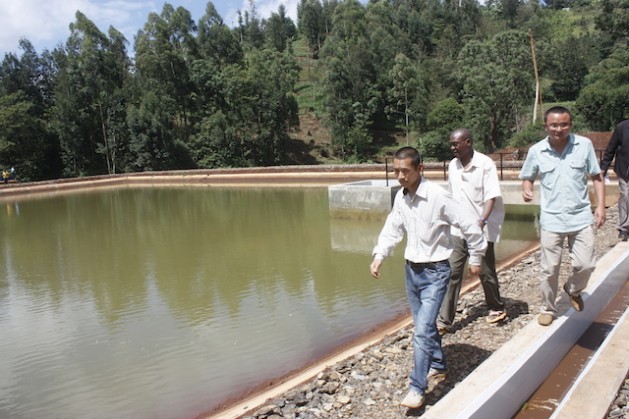 China has spent a significant amount of money in investing in infrastructure development in Africa. Credit: Miriam Gathigah/IPS

NAIROBI, May 21 2014 (IPS) - Janice Gacheri imports handbags and shoes from China which she sells on social media sites and by word of mouth to customers in Nairobi and neighbouring towns.

“For a part-time business, the returns are encouraging. I am considering pursuing it full time and broadening the range of products that I sell,” Gacheri tells IPS.

Africa is indeed a leading destination for Chinese consumer products.

David Owiro, project officer at local think tank, the Institute of Economic Affairs (IEA), tells IPS that “[Chinese] prices are competitive and their products also meet African’s tastes and preferences compared to products from the West.”

However, experts warn that significant trade imbalances exist amid China’s growing presence on the continent.

According to the Chinese Ministry of Commerce, between January and October 2013, bilateral trade between China and Africa was worth 172.83 billion dollars. And it is predicted to reach 200 billion dollars by the end of this year. But, Owiro says, trade relations between Africa and the European Union (EU) are much more favourable.

“We buy more from China than they buy from us. The EU buys more from Africa and in bulk but Africa buys less from the EU,” Owiro explains.

This comes amid Prime Minister Li Keqiang’s first visit to Africa since taking office in 2013. During the May 4 to 11 trip, Li attended the World Economic Forum on Africa in Abuja, Nigeria, and visited Ethiopia, Angola and Kenya.

During his visit to Kenya, Li and the government signed 15 deals — particularly relating to construction and agriculture. This included the controversial Standard Gauge Railway deal where China will fund and build a 3.8-billion-dollar railway from Kenya’s port of Mombasa to Nairobi in the project’s first phase. The railway will eventually connect Uganda, Rwanda, Burundi and South Sudan.

Under the terms of the agreement, Exim Bank of China will provide 90 percent of the cost and Kenya the remaining 10 percent.

“The project is too expensive and makes no economic sense. The period it will take Kenya to repay China for this loan has also not been made clear,” Owiro says.

But Alex Gakuru, chair of the ICT Consumers Association of Kenya and a member of the government’s Digital Transition Committee multi-stakeholder Task Force, says that China is responding to the huge infrastructural deficit that has hindered intra-African trade.

But Kenya is only one of the growing list of African countries that are increasingly looking to the East.

Although Owiro says that China is attractive to Africa because it comes with no conditions, “China’s interest in Africa is primarily based on Africa’s mineral wealth.”

He says that Angola is rich in diamonds and their longstanding relation with China is built on that natural wealth, adding that “Angola’s capital Luanda is home to nearly three million Chinese.”

“Nigeria is rich in oil and East Africa has been discovering oil and gas,” he says.

In 2013, Kenya discovered Niobium, rare earth deposits estimated to be worth 62.4 billion dollars.

“But the discovery of these minerals across Africa could also tip the scales in favour of Africa in as far as China-Africa bilateral relations go. China is interested in these minerals and they will have to import them from Africa,” says Owiro.

According to the Institute of Economic Affairs, Kenya’s energy sector could contribute an estimated 40 percent of the GDP once commercialisation begins, generating massive revenue for the country.

But Gakuru says that Africa stands to reap more than financial dividends from its interaction with China.

“It is no coincidence that the elusive peace deal in troubled South Sudan was brokered during this visit. Africa stands to reap peace dividends from this kind of regional approach,” he says.

Gakuru also says that Africa could benefit from transfer of technologies from China.

But, Owiro says, China is currently not transferring any technological knowledge “all the Chinese-driven construction in Africa is done by the Chinese themselves.”

“It is only after an outcry during the building of Nairobi-Thika Superhighway that the Chinese brought in a few Kenyans to do a few manual jobs,” he says.

Ken Ogwang, a Nairobi-based property developer and economic expert, says that there are about 2,500 Chinese firms in Africa, but the continent is still getting a raw deal.

“Studies have shown that Chinese firms in Africa create very minimal sub-economies. Where Chinese companies have been building roads, you expect locals to begin earning from feeding the constructors, housing them and so on,” he tells IPS.

But, as Owiro explains, this does not happen.

“The Chinese build their own campuses, and bring in what they need. But as China’s role in the global economy continues to change, Africa can benefit from this shift,” Owiro says.

He says that China used to be the destination for outsourcing manufacturing and assembling but Chinese are now becoming involved in more technical and rewarding jobs. “Those less technical jobs are now going to neighbouring developing countries like Vietnam and even India.”

He says that Africa must have economic policies that “leverage them to tap into these jobs. Like China, Africa has abundant and cheap labour. Ethiopia has already begun tapping into these jobs.”