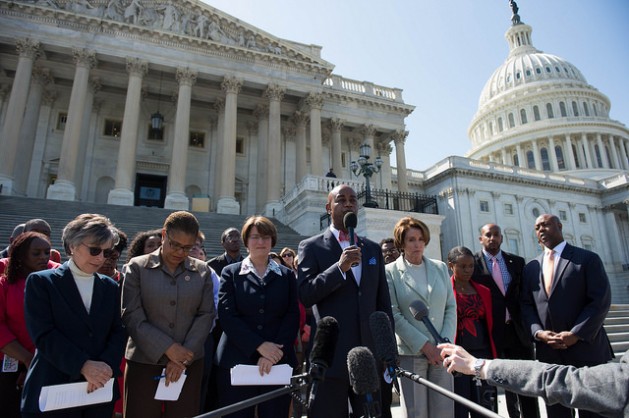 A moment of silence is held May 6, 2014 in Washington, DC for the 234 missing Nigerian school girls. Credit: Senate Democrats/cc by 2.0

WASHINGTON, May 9 2014 (IPS) - The fate of more than 200 schoolgirls abducted by the violent Islamist Boko Haram group from the northern Nigeria town of Chibok in mid-April has become something of a public sensation in the United States since the beginning of the month.

Politicians and activists are calling for strong action by the U.S. to help the Nigerian government locate and rescue the girls, while the main television network have been leading their periodic news summaries and nightly newscasts with the latest information on the kidnappings for the past week.

“The question is not so much one of inattention but one of tardiness in recognising that this is a sensational story." -- Andrew Tyndall

And Boko Haram, whose leader, Abubakar Shekau, threatened in a widely viewed video earlier this week to sell the girls into slavery, has emerged from a state of almost-total obscurity – despite the growing concern about its violence and links to other radical Islamist groups in North Africa and the Sahel among Africa specialists in and outside the government — to a remarkable notoriety among the general public on this side of the Atlantic.

“The media didn’t pay attention to the story when it first happened,” noted Emira Wood, an Africa specialist at the Institute for Policy Studies here. “Now you have [First Lady] Michelle Obama tweeting a photo of herself displaying the hashtag #BringBackOur Girls and Angelina Jolie speaking out about it.”

“Nigeria is not something on the radar of most American news organisations or the consciousness of most Americans, who, after all, would be quite hard-pressed to even locate Nigeria on a map,” according to Steven Livingston, a political communications expert at George Washington University, who credited Nigeria’s civil society groups and their use of social media for thrusting the story into the global spotlight.

“In this case, the story is easy to understand at an emotional level, especially for parents, and, after all, Boko Haram are not good guys, so you don’t have to understand a lot. You can just sign on and feel good about it,” he told IPS.

In that respect, he noted, the story is similar to the “Kony 2012” phenomenon, a 30-minute internet video seen by tens millions of viewers here and designed to promote stronger U.S. military efforts to capture the leader of the Lord’s Resistance Army (LRA) that has terrorised parts of Uganda and central Africa for more than a decade.

Even before the Kony 2012 campaign, the administration of President Barack Obama had deployed some 100 combat-equipped troops to the region in a multi-national campaign to track, disrupt, and ultimately capture Kony and his top lieutenants. Unsurprisingly, he is coming under pressure to take similar action to rescue the kidnapped girls.

Thus far, Obama has authorised dispatching up to 10 U.S. military and intelligence personnel to set up a “coordination cell” to work alongside Nigerian security forces as well as advisers from other countries whose offers of assistance have reportedly been accepted by President Goodluck Johnson.

U.S. officials have also said Washington has deployed surveillance assets to the region where the girls may have been taken, including northern Nigeria and neighbouring areas of Cameroun, Chad, and Niger where Washington maintains a drone base.

Some lawmakers, however, are calling for stronger action. “More can be done by this administration,” said Republican Sen. Susan Collins, told CNN Wednesday. “I would like to see Special Forces deployed to rescue these young girls.”

Similarly, Democrat Dianne Feinstein, who chairs the Senate Intelligence Committee, said that sending advisory team should be “just the first step” and that she would “support whatever actions are necessary to locate, capture and eliminate the terrorists responsible for this reprehensible act.”

All 20 women senators signed on to a letter calling for tougher actions against Boko Haram. Several of them re-introduced the bipartisan International Violence Against Women Act in the Senate Thursday, a bill that would make gender-based violence prevention and response a top priority for U.S. diplomats and aid programmes.

As noted by Wood, the story was initially ignored by the mass media here and made its first appearance on network news only last Thursday, more than two weeks after the abduction, according to Andrew Tyndall, publisher of the ‘Tyndall Report’, which tracks weeknightly news coverage by the three major U.S. television networks.

“The question is not so much one of inattention but one of tardiness in recognising that this is a sensational story,” he told IPS.

“It’s a general rule that sub-Saharan stories — especially those in which Americans are not involved — are under-covered by the mainstream national newscasts. However, in this instance, that general rule should not have applied,” especially given the involvement of a violent Islamist group allegedly tied to Al Qaeda in an action aimed at denying girls their right to an education – the abductees were kidnapped from a boarding school where they were taking exams.

“The issue of girls’ education in Muslim societies has already proved itself as an attention-grabbing story,” he added, noting the lavish media attention received last year by Malala Yousafzai, the Pakistani girl who led a global campaign for girls’ education after recovering from an attack by the Taliban.

Since last week, however, “the story has absolutely taken off and gotten the intensity of coverage that it should’ve gotten from the word ‘go’,” he told IPS.

Since last Thursday, he said, the story has received 32 minutes of coverage on the three networks – or more than 10 percent of their total coverage. After narrating reports from here, two of the networks sent reporters to Nigeria this week. That compares with 12 minutes total coverage of Kony 2012 in that year.

That total is still just over half the coverage given to the dominant story out of sub-Saharan Africa so far in 2014 – the trial of Oscar Pistorius, the white South African track star accused of murdering his girlfriend.

The Pistorius case also received a total of 51 minutes of U.S. network news coverage last year, making it second-biggest story out of the region in 2013, after coverage of Nelson Mandela’s death and funeral. But, Tyndall noted, the Nigerian story appears poised to continue drawing media attention for the foreseeable future.

Both Livingston and Wood expressed concern that all of the media attention and clamour for stronger action could prove counter-productive, especially if it results in direct U.S. military action. Livingston noted that it could “feed into the Boko Haram narrative that the Nigerian government is just a puppet of the Western oil interests, the U.S., and the British.”

Wood noted that Washington’s decision to add the group to its terrorist list late last year actually helped boost their profile among the disaffected and poor youth in the region. “A more militarised response could make things worse, both in rescuing the girls and in failing to deal with the root causes of the crisis,” she said.

Meanwhile, right-wing forces also sought to take advantage of all of the attention. In a FoxNews column published Wednesday, former U.N. ambassador John Bolton stressed that the kidnapping offered a “grim reminder” of the threat posed by radical Islam, claiming that the administration had ignored its growth across North Africa and the Sahel.