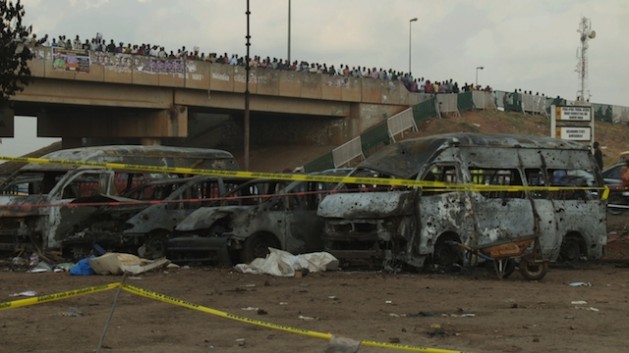 LAGOS, Nigeria, Apr 22 2014 (IPS) - Nigerians are beginning to adjust to the sad reality that they live in a country where suicide bombers and terrorists could be lurking around the next corner thanks to a ready supply of advanced weapons smuggled through the country’s porous borders.

Last week, Ngupar Kemzy’s cousin, Andy Nepli, told him that he planned to spend the Easter holidays with him.

But two days later, on Apr. 14, 32-year-old Nepli was one of the 75 people killed in two powerful explosions at a crowded bus station in Nyanya, a suburb in Nigeria’s capital, Abuja.

“Those using these modern weapons have attained a boldness they never would have had if they were handling crude weapons.” -- Steve Obodokwe, of the Centre for Environment, Human Rights and Development

Many of the victims were so badly wounded that it was difficult to identify them.

“We only knew it was him after checking his clothes and seeing his identity card,” Kemzy, who rushed to the scene, told IPS. “Human body parts were littered all over the place,” he said.

On the same night, Nigeria was forced to contend with yet another horror when 129 schoolgirls were abducted from their hostel in Chibok, Borno State in the country’s northeast.

Boko Haram, a group waging a violent campaign for the imposition of Islamic rule in this West African nation, claimed responsibility for the bombing. The group is suspected to also be responsible for the abduction of the schoolgirls in Chibok.

Bombings, abductions and a scorched earth policy of burning down entire villages and killing the inhabitants are some of the violent techniques used by the extremist group.

Boko Haram, which is believed to have links with Al-Qaeda and its affiliates, like Al-Qaeda in the Islamic Maghreb and the Somali-based Al-Shabaab, is mainly active in northeastern Nigeria

A transformation to modern weaponry is said to have aided the escalation of the crisis in the country.

Besides Boko Haram, several other armed ethnic militia operate in Central Nigeria. And armed groups have moved from using crude weapons like sticks, machetes, cudgels, and dane guns to more lethal and advanced weapons like machine guns and rocket-propelled grenades.

“Those using these modern weapons have attained a boldness they never would have had if they were handling crude weapons,” Steve Obodokwe, of the Centre for Environment, Human Rights and Development, told IPS.

“With their modern weapons, armed groups have been able to gather the courage to attack even military barracks,” said Obodokwe.

There is a ready supply of weapons smuggled into Nigeria through its porous borders. Some weapons are believed to have entered the country following armed conflicts in countries like Libya and Mali.

Former Nigerian defence minister Olusola Obada says some of the smuggled weapons were those looted from Libyan armouries during the 2011 crisis to oust the late Libyan leader, Muammar Gaddafi (1942 – 2011).

It is also believed that some of the weapons, especially those being used by Boko Haram, entered Nigeria through Al-Qaeda’s network.

“It is not out of place to suggest that some of the weapons in Nigeria were supplied by Islamist groups in Somalia and Mali,” says Obodokwe.

With its links to Al-Qaeda and a good supply of arms, Boko Haram has successfully carried out several high-profile terrorist attacks in Nigeria. These include attacks on military bases and the 2011 bombing of both the national police and United Nations headquarters in Abuja.

“The consequences of these successful attacks is that Boko Haram has demystified Nigeria’s security agencies,” Ifeanyi Okechukwu, national coordinator of the West Africa Network for Peace Building, which works with international organisations to prevent armed conflict, told IPS.

He says the success of Boko Haram has encouraged other groups here to pick up arms against their opponents, knowing that security agencies are incapable of stopping them.

The great cost to Nigeria

The conflicts in Nigeria have come at great cost. The International Crisis Group, an independent organisation working to prevent deadly conflicts, says the Boko Haram’s insurgency alone has “displaced close to half a million people, destroyed hundreds of schools and government buildings and devastated an already ravaged economy in the northeast, one of Nigeria’s poorest regions.”

The organisation fears that with no end in sight, the insurgency could spill over “to other parts of the north and risks reaching Niger and Cameroon, weak countries poorly equipped to combat a radical Islamist armed group.”

Some Nigerians are beginning to lose faith in the ability of security agents to stop Boko Haram and other militant groups in the country. But the government has continued to assure the populace that it will win the war against terror.

“Terror will not stop Nigeria from moving. The terrorists and those who are sponsoring them will never stop this country from moving, we will continue to move from strength to strength,” President Goodluck Jonathan said at a political rally a day after the Abuja bus station bombings.

Nigeria is scheduled to hold general elections next year.

Here, the buildup to elections is usually characterised by politicians arming their supporters in their quest for power. But with so many armed groups and with so many illegal firearms already in circulation, the build-up to next year’s elections might just stretch Nigeria beyond its limits.