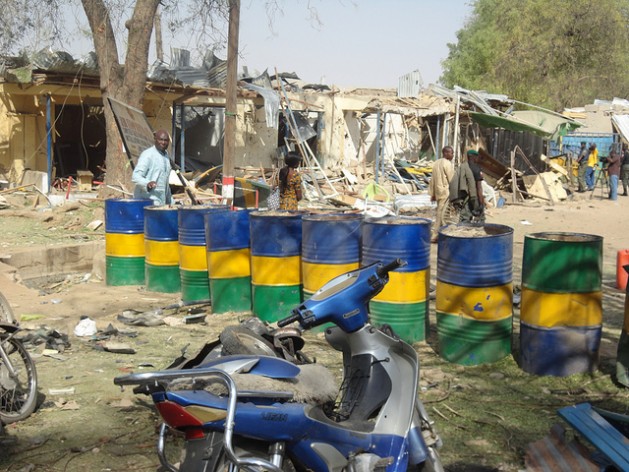 KANO, Nigeria, Nov 3 2012 (IPS) - A recent military curfew imposed on the violence-wracked north-eastern Nigerian town of Potiskum has not only made life unbearable for residents, but it has also reduced their chances of survival.

Hundreds of civilians are living in fear in the town in Yobe State after the Islamist extremist group Boko Haram, a sect that wants to impose Sharia law on the country, waged an assault there on Oct. 18, resulting in the death of more than 30 people.

The attack led the government to impose a curfew on the town that leaves residents only nine hours of daytime to be outdoors. Since Oct. 22 people have not been allowed to leave their homes from 4pm to 7am.

Dr. Bawa Abdullahi Wase, a senior research fellow on ethnicity, inequality and human security, told IPS that in a developing country like Nigeria a large number of people have to go out every day to look for food at markets and other places.

“Seven out of every 10 people have to look for food every day and the curfew could reduce their chances of survival.

“Of course there would be a shortage of food. And if someone is critically ill or natural disasters like a fire occur it would be difficult to get assistance from neighbours before the fire fighters arrive,” Wase said on the phone from Jos, in Plateau State.

Kabiru Sulaiman, a resident of Potiskum, said the town, which is the biggest commercial centre in Yobe State, has changed entirely since the curfew was imposed.

“All the shops and markets are closed even before 4pm. Movement has been restricted, and our lives really are in a sorry state,” Sulaiman told IPS.

According to fellow resident Zakari Adamu, who is also the head of the non-governmental organisation Nigeria Fight for Justice in Yobe, life is becoming difficult as the lives of people in Potiskum have begun deteriorating since the curfew was implemented.

“The town has returned to calm, it is time for the Yobe government to relax this curfew,” Adamu told IPS by phone.

Abubakar Mohammed is a businessman from Potiskum who fled to Kano State because he could not endure the difficulties caused by the curfew and the fighting between Boko Haram and Nigerian forces.

“I have relocated to Kano because life was miserable in Potiskum. Businesses are not doing well, incomes dwindle and people always live in fear of attacks from either Boko Haram or the military,” Mohammed told IPS in Kano.

Civilians caught up in the fighting have accused the country’s Joint Task Force (JTF) of attacking them. It is a claim that has been supported by Amnesty International, which issued a statement on Thursday Nov. 1 accusing Nigerian forces of human right abuses.

“Every injustice carried out in the name of security only fuels more terrorism, creating a vicious circle of murder and destruction,” said the organisation’s secretary general, Salil Shetty, in a statement issued to the press.

Meanwhile, children in Potiskum are unable to attend school as the Sabon Layi Primary School, King Abdulaziz Primary School and the Senior Science Secondary School are among the schools burnt down in the recent attack in a war that seems to be focused against the idea of Western education. Boko Haram means “western education is sin”.

Adamu visited the scene and reported that many schools have been affected by the Islamists’ attacks.

“I have seen approximately five schools burnt down in Potiskum,” he said.

While residents in Potiskum complain about the curfew; the state government of Yobe said it would not be lifted anytime soon.

“The curfew is still there from 4pm to 7am and it is meant to protect lives and property,” Abdullahi Bego, special adviser on press affairs and information to the governor of Yobe, told IPS in a telephone interview.

Security analysts say the government did not take adequate action on intelligence reports on Boko Haram before they became so prominent in the country. If they had, they could have rooted out the Islamists or reduced their activities years ago, James Kura Garba, a security analyst and retired State Security Service chief based in the northern state of Kaduna, told IPS.

“There were intelligence reports since before the Boko Haram mayhem started that these gunmen were receiving training at camps outside Nigeria. But the government did not act,” Kura said.

“The government has erred by not using intelligence reports in a timely fashion; they could have crippled the activities of Boko Haram or reduced them to the barest minimum,” Garba said.

Garba, who lamented the government’s failure to secure lives and property, said it should intensify its efforts and people should cooperate with security agencies by giving vital information.

Meanwhile, the attacks continue. On Sunday, Oct. 28, a suicide bomber hit St. Rita’s Church in the western state of Kaduna. The explosion resulted in the death of more than 10 people and injured several others, including children.

Though no group has yet come forward, Boko Haram has claimed responsibility for similar attacks in the past.