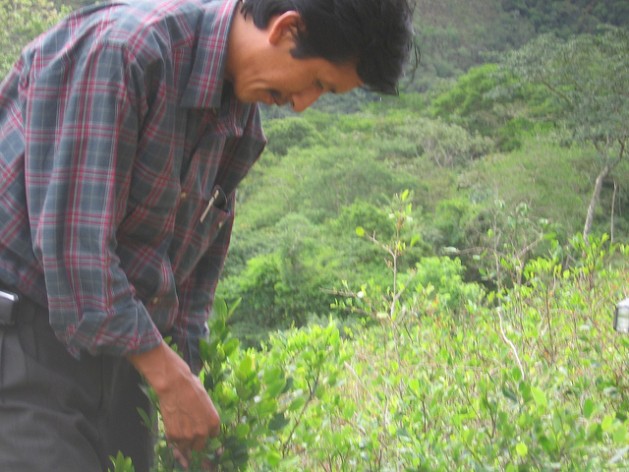 UNITED NATIONS, Jun 26 2014 (IPS) - This week, the U.N. reported that coca cultivation in Bolivia fell nine percent last year, and a massive 26 percent in the past three years.

“A very small country challenged the basic premises of U.S. domination and policy implications, and it succeeded." -- Kathryn Ledebur

The nationwide decrease, to an area of only 23,00 hectares, or 12 miles, is widely regarded as a laudable achievement, but overlooked is the fact that Bolivia’s success has come on its own terms – not Washington’s – and with vital cooperation from many of the country’s small coca farmers.

“Bolivia reduced the crop through eradication efforts, but also with the participation of coca growers and farmers,”Antonino de Leo, U.N. Office for Drugs and Crime’s representative in Bolivia, told IPS.

“They are doing this in a climate of participation and dialogue – they call it social control,” he added. “Not only does the government have a target for illicit cultivation, but it’s the very same as what farmers and the union of farmers have.”

After his election in 2005, President Evo Morales, himself the former head of the country’s Cocalero union, began negotiating with farmers and their unions, working to convince them that mutually agreed upon cultivation totals would mean higher prices and a sustainable income for tens of thousands of subsistence growers.

Indeed, last year, the price of coca in Bolivia, already higher than in neighbouring Colombia and Peru, rose a further seven percent, from 7.40 dollars to 7.80 dollars per kg.

While the total value of Bolivia’s coca crop fell from 318 million dollars to 283 million dollars, farmers for the most part no longer live in fear of having their livelihoods destroyed by the severe eradication efforts that were funded by the U.S. and characterised drug policy in the Andean nation for decades.

A militarised response favours criminal gangs and armed factions and leads to a concentration of illicit wealth among those groups. In Bolivia, the annual coca allowance of one cato – usually 1600 square metres – is seen as a sort of minimum wage, rather than a bonanza for a small elite.

Unlike in Peru and especially in Colombia, where forced eradication, fumigation and seizures are still the preferred method of handling illegal coca production, farmers in Bolivia allow officials to visit and measure their mountainside fields – measurements that are then verified by satellite data.

Because of this, data reported by the government closely match U.S. figures (they were identical in 2012), while the two sets of numbers can vary wildly in neighbouring countries.

“Nothing is done entirely without friction, but it has done away with cycles of protest and violence and the deaths of coca growers,” Kathryn Ledebur, director of the Andean Information Network, told IPS. “There continue to be human rights violations, but in the past they would rip out all their coca and there was no plan for how they should eat in the meantime.”

In Colombia, the government destroys roughly 100,000 hectares every year. Because small farmers often have no economic alternative, they replant coca, and the cycle begins again.

Bolivia’s programme does have strict limits and well-defined geographic allotments for growing. Any plants found to be in excess of the cato or in areas not approved for cultivation are destroyed.

“Good practices show that in order to reduce illicit crops in a sustainable way and avoid the balloon effect, there is a need to combine eradication efforts with long-term participatory development programmes that create real opportunities for the farmers, and they need to be comprehensive,” said de Leo.

In 2008, Morales expelled U.S. ambassador Philip Goldberg; the following year the Bolivian government kicked the DEA out the country, and drug funding from the U.S. ceased.

The moves were a precursor to a carefully planned re-working of Bolivia’s obligations under the U.N. convention system that governs global drug policy. In 2011, the country took the unprecedented step of withdrawing from the 1961 convention on Narcotics Drugs, but the following year re-acceded – with the stipulation that Bolivia be allowed to maintain a legal domestic market for coca leaves.

The decision was accepted by the overwhelming majority of member states, who accepted that coca was a traditional plant used, without abuse, by millions of Bolivians.

Like various other efforts, including marijuana legalisation in several U.S. states, the decision served to chip away at a uniform and prohibitionist legal interpretation of the conventions. But unlike Uruguay, Washington and Colorado, Bolivia has official approval from the international community.

“If 15 years ago someone asked what would happen to an Andean country that loses all U.S. funding, we’d be talking about Marines coming in and things falling apart, but none of those things have happened,” said Ledebur.

“A very small country challenged the basic premises of U.S. domination and policy implications, and it succeeded,” she added.

Last year, the U.S.government cited Bolivia’s withdrawal from the conventions when it decertified it for failing “demonstrably to make sufficient efforts to meet its obligations under international counternarcotics agreements.” But in the same memorandum, authorities acknowledged the “pure potential cocaine production” of the country had decreased 18 percent in 2012.

While Bolivia may have made peace with its coca growers, it’s still the third largest producer of cocaine in the world. In 2013, the government destroyed over 5,000 cocaine production facilities and maceration pits and seized 20,400 kilogrammes of cocaine paste.

Fueling production in the Andes is the growth in demand in Brazil, today the second largest cocaine market in the world behind the U.S.

“As long as there is a solid demand for cocaine, it’s going to be very difficult to compete with coca – it will always be a very attractive crop,” said de Leo.

Though users are generally not criminalised for use to the extent in other countries, law 1008, a draconian, U.S.-influenced legislation signed in 1988 still underpins drug policy in the Bolivia. A lack of clarity in the law means a worker labouring inside a cocaine factory can be treated the same as a powerful “narcotraficante”.

Law enforcement efforts still tend to target the poorest members of Bolivia’s society. One survey found 60 percent of prisoners were earning less than 300 dollars every month before they were arrested.

“They pursue interdiction in a very traditional way,” said Ledebur.

Buoyed by his successes, Morales has announced a goal of further reductions in the coca crop, down to 14,700 hectares. To this point, curtailment has been sufficiently absorbed by growers, but greater cuts could run up against opposition. If farmers feel squeezed, Morales, the former coca grower, could find he’s bit off more than he can chew.