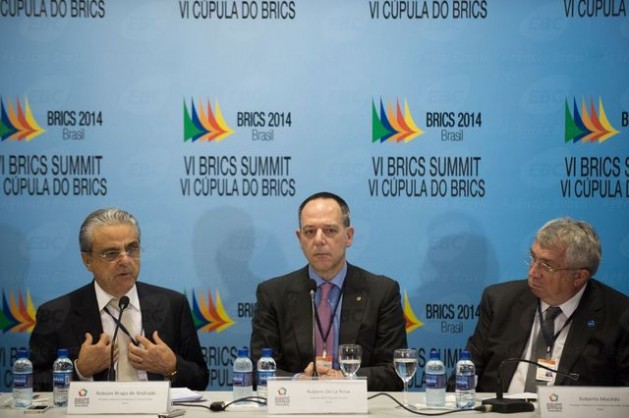 Brazilian officials at an information meeting prior to the Sixth BRICS Summit. Credit: Agência Brasil/EBC

FORTALEZA, Brazil, Jul 15 2014 (IPS) - The growing vitality of the group of countries made up of Brazil, Russia, India, China and South Africa (BRICS), which is beginning to formalise its institutions even as it tries to bridge very disparate realities, seems to be partly cemented by increasing links between its companies.

The complementary nature of their economies was highlighted at the BRICS Business Forum on Monday Jul. 14, one of the meetings prior to the sixth annual summit of the five leaders, inaugurated Tuesday Jul. 15 in the northeastern city of Fortaleza and closing on Wednesday in Brasilia.

Trade between the five countries has multiplied 10-fold between 2002 and 2012, reaching 276 billion dollars.

More than 700 members of the business community participated in the entrepreneurial debates, designed to promote 3.9 billion dollars worth of contracts in the sectors of agriculture, infrastructure, logistics, information technology, health and energy.

The Business Forum of the BRICS group of emerging powers began its work five years ago.

There is “an immense complementarity” among BRICS members, which can be appropriately used to greatly benefit all its countries, said Marcos Jank, head of corporate affairs at BRF, a Brazilian transnational and leading meats exporter.

“China has an enormous market and Brazil has vast reserves of natural resources,” with a lot of productive land to supply large populations, he said.

This is one way of looking at what many criticise as unbalanced trade, in which Brazil exports virtually exclusively commodities, especially soya and iron ore, and imports mainly manufactured goods from China.

But integration of production chains and higher added value in exports can happen even in the agriculture and livestock business, Jank said. Instead of importing soya to feed its meat production, China could import the meat from Brazil, he said.

A major hurdle to the growth of trade and productive integration between the BRICS countries are barriers of all kinds, tariff and non-tariff, technical, subsidies and other protectionist measures that affect trade, particularly in agricultural products, Jank complained.

India has prohibitive tariffs of up to 100 percent on Brazilian chicken, while South Africa “is closed” and Russia is a “volatile” market, opening and closing in rapid succession for Brazilian meats, he said.

Nevertheless, trade between the five countries has multiplied 10-fold between 2002 and 2012, reaching 276 billion dollars, according to the World Trade Organisation. The share of the BRICS group in global trade has doubled from eight to 16 percent between 2001 and 2011.

Two new instruments that will be formally created at the Summit contradict views that the group had little chance of integration because of its political and historical differences, disparate levels of development and even commercial strategies.

These are the New Development Bank (NDB) and the Contingency Reserve Arrangement (CRA), a common fund to combat financial crises.

The progress seen in only a few years, since the BRIC acronym was coined in an analysis of emerging economies by an economist at a U.S. bank, contrasts with the stagnation of other coalitions, like the IBSA Dialogue Forum involving India, Brazil and South Africa, which interrupted its summit meetings in 2011.

“What unites the emerging BRICS countries is power,” according to Narinder Wadhwa, executive director of SKI Capital Services, in India.

Jointly, the BRICS have 46 percent of the world’s population and 26 percent of its land mass. The BRICS countries’ combined gross domestic product, based on purchaing power parity (PPP), is greater than that of the U.S. or the European Union, “so it is natural that they should demand greater participation in decision-making bodies,” he told IPS.

This seems to have fuelled the group’s high rate of progress since its first summit was held in 2009.

Another factor accelerating integration is the potential for exchange of trade and investments in these large countries with a combined population of nearly three billion people, where numbers of middle class consumers have grown rapidly in recent decades.

For this reason, Wadhwa says he is “optimistic” about the future of what many people are already calling a “bloc,” although no treaties have been signed that would justify the term and its governments are reluctant to be considered as such.

Africa is a new frontier for global trade and investment, with consumption growing rapidly in the middle population sectors, the president of the African Business Council, Patrice Motsepe, told IPS.

Motsepe, a mining magnate regarded as the first black South African billionaire, chaired a report on the business potential of the five countries that underscored Africa’s high potential.

Each national chapter of the Business Council is made up of 25 business people, who have set up five working groups to study potential joint business enterprises in infrastructure, financial services, manufacturing, energy and capacity development.

Much still remains to be done to increase economic integration between the BRICS countries, which were formerly practically unknown to each other, these business leaders said.

De la Rosa said that among the proposals to be made to heads of government in Fortaleza was promoting trade in national currencies, because this would “reduce the cost of transactions” and could favour trade and investments.

Facilitating visas for business trips, harmonising technical standards, intensifying communication between companies in the different countries and overcoming barriers, including red tape, will be some of the other recommendations made by Robson Andrade, the president of the Brazilian National Confederation of Industry (CNI) which organised the Business Forum in Brazil.

The main concern of Brazilian industrialists is the trade deficit of Brazil with its partners, which amounted to 101 billion dollars in 2013, equivalent to 21 percent of Brazilian trade.

More than 70 percent of Brazilian exports to China, India, Russia and South Africa are soya, iron ore and oil, while in the opposite direction 95 percent of what Brazil imports from these countries are manufactured goods, according to CNI.