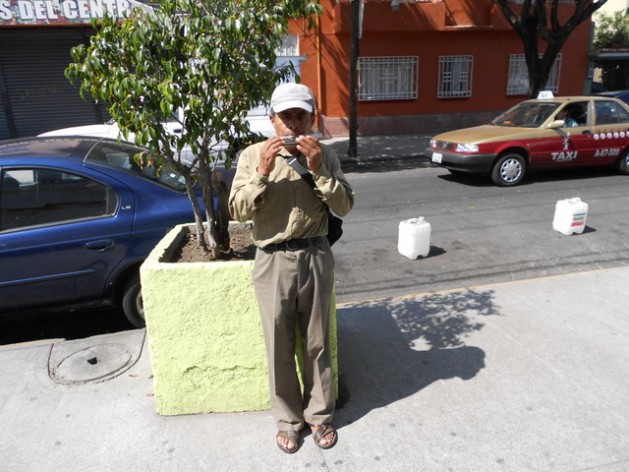 Leobardo Gómez tries to eke out a living playing the harmonica on the streets of Mexico City, because injuries caused by a workplace accident have kept him from returning to construction work. Credit: Emilio Godoy/IPS

MEXICO CITY, Jul 28 2014 (IPS) - Construction worker Leobardo Gómez has been out of work for nine months since he slipped and fell to the street on a construction site in the Mexican capital in October.

“I broke two ribs and I still can’t work,” the 44-year-old, who came to Mexico City from the southern state of Puebla, told IPS. “The doctor told me I have to rest, and my social security coverage has run out. My body is still in pain.”

Gómez, who has worked from a very young age, said that while he is recovering, he goes around to cafés and restaurants playing the ten songs he knows on the harmonica, for spare change.

For people like Gómez, who fall through the cracks, Latin America and the Caribbean should push to achieve universal access to social services and policies to boost formal employment in order to make faster progress towards human development, the United Nations Development Programme (UNDP) and experts recommend, while pointing to the improvement in human development indicators made in recent years.

In its 2014 Human Development Report “Sustaining Human Progress: Reducing Vulnerabilities and Building Resilience”, published Jul. 24, the UNDP notes that Latin America is the developing region with the highest level of human development.

But it also warns that progress has slowed down in the last five years in comparison with the 2000-2008 period, and that vulnerabilities threaten to revert the progress made.

On the UNDP Human Development Index, Chile is the highest ranking Latin American country, listed 41st of the 187 countries studied – having moved one place up between 2012 and 2013.

The only country that classified as having low human development was Haiti, which continued to rank 168 out of 187.

“Inequality is the main problem,” Emilia Reyes, an expert on inequality issues, told IPS. “Equality has an inherent link to the structure of the state, which has depended on the elites for so long, with the idea that there is an invisible hand that has actually never existed, and without any recognition that people have value.”

Reyes, in charge of policies and public budgets with a gender focus in the non-governmental organisation Gender Equity: Citizenship, Work and Family, said “It’s time for a structural reading of development that takes into account the social and environmental impacts of the concentration of wealth.

“In Latin America we don’t have a focus on sustainable development,” she added.

The Human Development Index scores range from 0 (the lowest) to 1 (the highest). The Index is a composite statistic of life expectancy, education levels and incomes. The HDI of Latin America as a whole increased from 0.73 in 2010 to 0.74 in 2013. Chile is in top place, with an HDI of 0.82, followed by Cuba and Argentina (0.81), with Haiti, Nicaragua and Honduras bringing up the rear.

The UNDP warns that Latin America’s progress in human development slowed down 25 percent since 2008. It also stresses that, despite experiencing the largest fall in inequality, this region remains the most unequal in terms of income.

Inequality declined in Latin America and the Caribbean, in part due to the expansion in education and public transfers to the poor, says the report.

The study states that inequality declined in 14 nations in the region between 1990 and 2012, while it grew in only four. In two others, there was no clear trend.

In 14 Latin American and Caribbean countries, nearly seven percent of the population experiences multidimensional poverty, while an additional 9.5 percent is at risk of falling into this kind of poverty, marked by multiple deprivations in education, health and living standards.

Liliana Rendón, a professor in the economy department of the Autonomous University of the State of Mexico, said “progress and growth in the indicators should be treated cautiously, because it is only reflected in a small part of the population, which experienced an increase in wellbeing.”

Rendón pointed out that the rise in human development occurred concomitantly with growing income inequality in several countries. “The poor do not only suffer from an income deficit; poverty also includes shortcomings in healthcare, education and other problems. Income must translate into wellbeing, taking social, environmental and policy aspects into consideration,” she said.

Despite the strong growth in productivity, real wages in the world have remained stagnant. But in the region, they rose 15 percent between 2000 and 2011.

Vulnerable employment also declined in the region, from nearly 36 percent in 2010 to 31.5 percent in 2012, while the proportion of the workforce living on less than 1.25 dollars a day was also reduced in that period.

One of the novelties in the report is the inclusion of the Gender Inequality Index, where Latin America and the Caribbean is in first place among developing regions.

Argentina, Barbados and Uruguay are among the 16 countries in the world where female HDI values are equal to or higher than those for males.

“The state cannot generate economic, social and cultural development for just 49 percent of the population, males, because women face insurmountable barriers in access to those spheres. That means reducing discrimination, expanding opportunities and recognising obstacles to social protection,” Reyes said.

The UNDP also recommends the creation of a Latin American Monetary Fund to complement global funds and to build up reserves, help stabilise exchange rates, provide short-term funds to members and offer oversight.

The region already has a Latin American Reserve Fund (FLAR), created in 1976 and made up of Bolivia, Colombia, Costa Rica, Ecuador, Paraguay, Peru, Uruguay and Venezuela, which have provided total capital of 2.37 billion dollars.

In her view, “This can be achieved with sustained economic growth that allows universal investment in health and education, and by guaranteeing the quality of such services.”