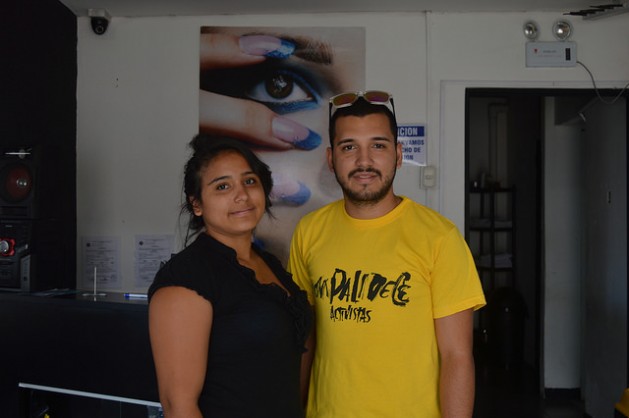 Ángel and Guadalupe Villalobos work near the University of Costa Rica in San José. He is a hairdresser at a beauty salon and she distributes fruit for a small business run by this brother and sister. Credit: Diego Arguedas Ortiz/IPS

SANTIAGO, Jul 10 2014 (IPS) - In Latin America, young people are the main link in the chain of poverty leading from one generation to the next. Civil society groups, academics and young people themselves say it is imperative to strengthen the connection between education today and decent employment tomorrow.

“The region’s youth is a subject in its own right, with great symbolic power. It is probably the age group that generates the richest range of identities and cultural expressions,” Martin Hopenhayn, head of the social development division of the Economic Commission for Latin America and the Caribbean (ECLAC), told IPS.

“We have a great responsibility, because we are the future of this country." -- María Fernanda Tejada

One in four Latin Americans is aged between 15 and 29, according to the Santiago-based ECLAC. This makes it a young continent, “but not for long,” Hopenhayn said.

The population aged 0-15 has fallen markedly in the region, so in 20 years’ time it will have an ageing society.

“That’s why it is very important to invest now in young people, because in 20 years’ time we are going to need the non-aged population to be much more productive,” Hopenhayn said.

But investment in youth is relatively low in Latin America, especially when public and private investment in post-secondary education is compared with emerging countries in southeast Asia, or with European countries.

“Young people are the main link in the intergenerational transmission of poverty,” Hopenhayn said. This transmission will determine whether young people currently becoming economically independent will re-experience “the income poverty and job insecurity of previous generations, that is, of their parents,” he said.

The key mechanism to interrupt this intergenerational transmission is to improve the connection between education today and employment tomorrow, he said.

The United Nations highlights that the present generation of youth worldwide is the largest in history, totalling 1.8 billion young people, most of whom live in the developing countries of the South.

Consequently, UNFPA is seeking to build awareness about the urgent need to increase resources devoted to youth. Its theme for World Population Day, celebrated this Friday Jul. 11, is “investing in young people.”

“We must reduce the gap in educational attainments between poor and non-poor young people,” by focusing investment on education for lower-income sectors, he said.

“At present, completing secondary education is the minimum requirement for a young person moving into the world of work and a lifelong career to have real expectations of achieving well-being and social mobility, and overcoming poverty,” Hopenhayn said.

Ángel and Guadalupe Villalobos, a brother and sister who have set up a small fruit distribution business of their own near the University of Costa Rica, in San José, are well aware of this fact.

Ángel, 21, finished his studies as a hairdresser in December 2013 and began working in January 2014. When his 22-year-old sister and her partner separated, the brother and sister started to distribute fruit in local beauty salons.

“Perhaps the main barrier is that if you are experienced and older, it is difficult to get a job, and if you are young, in spite of all your energy, it’s also difficult, but here (in the salon) they have offered me good opportunities,” Ángel told IPS.

Neither of them has started university and Guadalupe has not finished secondary school. In Costa Rica, with its 4.8 million people, 22 percent of young people work in the informal economy, which Ángel and Guadalupe intend to leave.

In Mexico, 37 million people are aged 15-29, out of a total population of 118 million. Nearly 26 percent of this age group are neither studying nor working, and almost 45 percent of them live in poverty.

“I am worried about the lack of opportunities and the prospect of unemployment,” 18-year-old María Fernanda Tejada told IPS. In August she will start studying internatioal relations at the Autonomous University of Mexico, in the capital city.

“We have a great responsibility, because we are the future of this country,” added Tejada, who is the eldest of four children.

In Santiago, 19-year-old Daniel Hurtado is studying medicine, in spite of the social expectation that he would probably work “in a call centre, or as a supermarket packer, in construction or as a waiter,” his father Hugo, himself a waiter, told IPS.

A wage earner in Chile, which has a population of 17.6 million, earns an average of 500 dollars a month, and generally has no chance to send children to university, where medical studies cost between 900 and 1,200 dollars a month. “It’s a gruelling effort,” said the father. “But we are breaking through the barrier,” said the son.

In Hopenhayn’s view, intervening in education is the best means to break the intergenerational cycle of poverty, because it is a mass phenomenon that is socially recognised, and has a major impact on the world of work.

According to a study by ECLAC and the United Nations Population Fund (UNFPA), nearly one-third of young people in Latin America and the Caribbean live in poverty, which contravenes their human rights, enshrined in international treaties.

The study, published in 2012, says that the poverty and extreme poverty rates among young people aged 15-29 in the region are 30.3 percent and 10.1 percent, respectively. Together with under-15s, this group is the most vulnerable to poverty in the region.

Employment opportunities are limited for young people, who have an unemployment rate of 15 percent, while for those aged over 30, unemployment is only six percent.

Another factor is the high rate of informal employment in the region, which particularly affects young people.

“For instance, in Chile between 45 and 50 percent of workers are in informal employment, but in the 15-29 age group, 60 percent are informal workers,” sociologist Lucas Cifuentes, a researcher with the Work, Employment, Equity and Health programme at the Latin American Faculty of Social Sciences (FLACSO), told IPS.

He said, “undoubtedly employment is the lynchpin of social development,” and added that “it is impossible to overcome poverty without decent, dignified and protected work.”

While waiting for that to materialise, Latin American societies continue to seek their own alternative solutions to problems like inequality, and young people demand – in some countries, on the streets – investment to break the transmission of inequality in their generation.

With additional reporting from Emilio Godoy in Mexico City, and Diego Arguedas in San José.