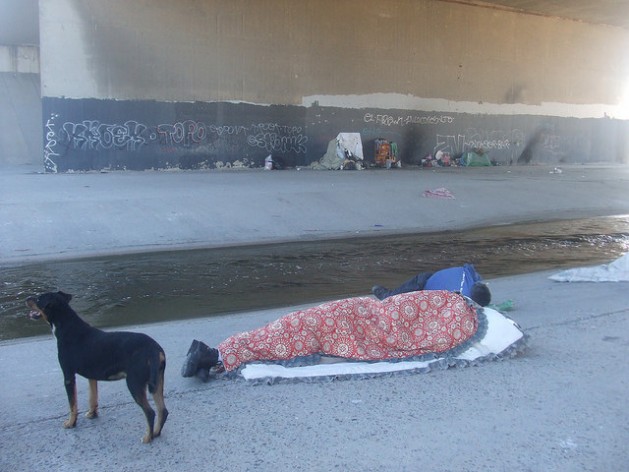 A migrant deported from the United States sleeps under a bridge on the stretch of the Tijuana River known as El Bordo, at the northwestern tip of Mexico, next to the border. Credit: Daniela Pastrana/IPS

TIJUANA, Mexico, Aug 23 2014 (IPS) - The areas under the low bridges over a section of the canalised channel of the Tijuana River that runs along the border between Mexico and the United States have become enormous open-air toilets.

Along the entire two-km stretch from the eastern part of Tijuana to the wall on the U.S. border, hundreds of people sleep in makeshift tents of cardboard and cloth, tunnel-like holes, and sewage ditches and on the bridges and the sides of the levees. The banks are strewn with trash washed down by the Tijuana River, which stinks from the sewage.

The stench is dizzying. At 7:00 AM, the junkies, who can get heroin here for two dollars a dose, are happy to be given a few chocolates, which help curb their sugar craving. “This is the city of El Bordo,” one of them tells IPS with a crooked smile, his hand stretched out.

This is the “city” of people who have no one. The underside of the border bridges and the banks of the concrete-lined channel are home to hundreds of deported homeless migrants who have decided to wait for a better moment to cross this tightly sealed border, and who survive cleaning windshields, offering to carry people’s bags outside of supermarkets, doing odd construction jobs, collecting refuse to sell for recycling, or panhandling on the streets of the border city of Tijuana.

“The population that inhabits El Bordo is an illustration of the extreme conditions that the most vulnerable deportees can face in Mexico,” says the study “Estimates and Characteristics of the Population Residing in El Bordo on the Tijuana River Channel”.

The report, produced by the Colegio de la Frontera Norte (COLEF), counted between 700 and 1,000 people living in El Bordo in August-September 2013.

It adds that the residents of El Bordo are mainly male addicts (some began to use drugs here) in their forties, who were deported in the last four years and have no identity documents. Most of them have left children behind in Mexico or the United States.

According to the report, half of them speak English, and overall they have similar levels of schooling as the rest of the population of Tijuana. It adds that only six percent say they want to return to their place of origin in Mexico.

“These results reflect that deportations from the United States to Mexico are causing families to separate, and are specifically separating parents from their homes, which causes a rupture in the lives of individuals and families, and puts an end to the possibility of integration in the country of residency by the rest of the members of the family,” says the study, coordinated by Laura Velasco, a researcher in COLEF’s Department of Cultural Studies.

Tijuana is at the northwestern tip of Mexico, 2,780 km from Mexico City. It is in the state of Baja California across the border from San Diego, California. In 2012, the city received 59,845 of the 409,849 people deported by the government of Barack Obama.

Since Obama’s second administration began in 2009, more than two million people have been deported – seven people per hour in 2012 – which means the administration has deported more people than any other government.

Tijuana, population 1.7 million, has more drug addicts than any other city in Mexico, in proportional terms. It is the headquarters of weakened drug cartels, and is considered one of the most violent and dangerous cities in the world.

For decades it was the main gateway for migrants to the United States.

But the Sept. 11, 2001 terrorist attacks in New York and Washington prompted a shift in U.S. migration policy and the Mexican border began to be sealed off, forcing undocumented immigrants to seek out increasingly remote and hazardous routes, while the number of Border Patrol agents climbed from 3,500 in 2005 to 21,000 in 2013.

Mexico and the U.S. are separated by a 3,500-km border. Baja California, which borders the city of San Diego and the state of Arizona, receives one-third of the deportees and is the state with the largest number of foreign residents.

In the state capital, Mexicali, 177 km east of Tijuana, the heat of August – up to 50 degrees Celsius – can kill, and people who don’t have air conditioners sleep on rooftops.

Mexicali has its “mini Bordo”: the Montealbán condominium complex, severely damaged by an earthquake in 2010, on the eastern shore of the now non-existent Nuevo River, a few metres from the historic old city.

Some 80 local homeless people and deported immigrants, basically all of them addicts, live in the condemned buildings.

Bodies have been found in the ruins. The latest was discovered on Apr. 15. And there are constant fires and police raids.

“I live here because there is nowhere else to go,” Josué, a 33-year-old from Guatemala, told IPS.

“I felt overwhelmed in the shelter, there are so many people,” said Josué, who was deported Aug. 1, 2013 and has only one thing on his mind: returning to the United States.

He has already tried to cross the border in Nogales, in the state of Sonora, but he didn’t make it. He was told it was easier here, and he’s just waiting “for the heat to end” to try again. “I was 10 years old when I got to California; I have nothing in Guatemala,” he said.

Another COLEF study on the characteristics of deported immigrants, in this case Mexican women, sounds the alert about the health problems they face.

“There is an alarmingly high rate of symptoms of emotional problems among the deportees – nearly 20 times higher than among those who return voluntarily,” says the study, based on research on the health of deportees being carried out by Letza Bojórquez, a researcher with COLEF’s Department of Population Studies.

Drawing on statistics from the Border Survey of Mexican Migration, the study found that 40 percent of the migrant population living on the streets reported emotional problems and 12 percent answered “yes” to the question of whether they had ever thought about taking their life.

“The problem here is that there is no policy providing for attention to the deportees,” activist Sergio Tamai, director of the Albergue Hotel Migrante, a shelter in Mexicali, and one of the heads of the organisation Ángeles sin Fronteras, told IPS. “Hundreds of deportees started to arrive and there was no institution prepared to receive them.”

Between August and November 2013, Tamai led a protest in Tijuana, with 800 people camping out in the Plaza Constitución to demand programmes providing assistance to migrants, deportees and the homeless.

Lobbying of the authorities by civil society organisations and religious groups has brought some results.

On Aug. 7, the state legislature of Baja California passed a law for support for the rights of and protection of migrants in the state, which requires that the state system for the integral development of the family provide social assistance to unaccompanied minor children and adolescents, and that a state registry of migrants be created.

It was the first state to do so, after the Mexican Congress approved the creation of a new migration law in 2011, which replaced the 1947 law and provides legal recourse for Central American migrants making their way through Mexico.