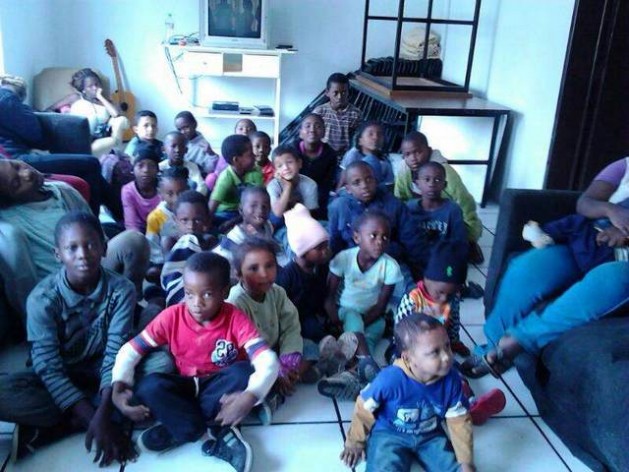 Garifuna children from Honduras relax at one of the shelters on Mexican migration routes. Credit: Courtesy of Migrant rights defenders

IRAPUATO, Mexico, Jul 7 2014 (IPS) - In early May, the Irapuato Migrants’ House, in the centre-west Mexican state of Guanajuato, took in a group of 152 Garifuna Afro-Caribbean people from Honduras. Sixty of them were children.

“It was a Sunday,” said Bertha, the cook. “They had children of all ages, from babies on up. They were only here a few hours, they showered, ate and left. They did not talk much. I asked one of the women if these children go to school, and she just said: ‘No, we can’t right now,’ and nothing else,” she told IPS.

“It is an appalling bloodletting. Children aged 13-16 are sent straight into sexual exploitation or slave labour, or they are massacred or disappeared, or become hired killers." -- Diego Lorente

Between May and June, this shelter took in over 400 children, mostly from Honduras. They travelled in large groups. Only once did they stay for more than four hours.

“They said very little, they did not tell us how they travelled, although we know they did not come on the train. They wouldn’t say what route they were taking, either,” Guadalupe González, the head of the shelter, told IPS.

Some 1,000 kilometres to the southeast, “La 72” migrants’ shelter in Tenosique, a municipality in the state of Tabasco on the border with Guatemala, is also experiencing a similar trend.

They began to see a marked increase in unaccompanied young migrants aged 14-18, women with small children, and groups of Garifunas, who were previously only occasionally to be found on the migrant route to the United States.

Mexico’s northern border with the U.S. is 3,152 km long, while in the south its border with Guatemala is 956 km long, and with Belize it is 193 km. The distance from south to north of the country is 3,200 km as the crow flies, but the six main migration routes are over 5,000 km long.

The same pattern that has been seen in other hostels has been found at the Belén Migrant Shelter in Saltillo, the capital of the northeastern state of Coahuila, on the U.S. border, where since May the passage of children has risen from an average of four a month, to four a day.

“Its an extremely alarming situation,” Father Pedro Pantoja, who runs the hostel and is an expert on migration affairs, told IPS.

It is still not clear what has provoked this exodus of Central American children, many of them on their own, which has overwhelmed the capacity of the U.S. Border Patrol and created a humanitarian crisis in the United States, according to President Barack Obama.

Advocates for migrants in Mexico attribute the surge to the spread of rumours about future regularisation for migrants who enter the U.S. as children.

This, at least, is what has prompted Delsy, a 20-year-old Honduran woman who looks several years younger, to head north, leaving behind her mother, four siblings and her 15-month-old son.

“Someone told me that if I declare I’m under 18, I can get into the United States from (the northwestern border city of) Tijuana. She said it’s a sure thing, because that’s how she got in,” Delsy told IPS at the Irapuato shelter, shortly before taking the train to the border.

Since October 2013, more than 52,000 children have been detained in the United States. In Texas and Arizona, two states on the border with Mexico, facilities at detention centres and military bases are filled to overflowing  and minors are overcrowded while they await deportation.

Organisations working for migrants’ rights, like the Fray Matías de Córdova Human Rights Centre (CDHFrayMatías) in the southern city of Tapachula, in the state of Chiapas, documented the systematic increase in the influx and detention of children since 2011.

However, none of the governments involved took measures to combat it. What did change was the place of origin, because Mexico was formerly the main country of origin of migrant children.

The Washington-based Pew Research Centre linked the new places of origin of child migrants with indicators of violence.

“There is a humanitarian crisis, not only in the United States, but also in the northern triangle of Central America, and chiefly in Honduras, which is forcing children and victims of social and political violence to leave the region,” activist Diego Lorente of CDHFrayMatías told IPS.

The problem could be even worse than it seems, because thousands of child migrants who leave their homes never make it to the United States. Human rights organisations estimate that four out of 10 children who migrate do not even reach Mexico’s northern border.

Some are detained in Mexico. The government’s National Migration Institute reported that between Jan. 1 and Jun. 26, 2014, it had “rescued” 10,505 migrant children, who are in the process of being deported back to their countries.

But many more simply disappear in Mexican territory.

“It is an appalling bloodletting. Children aged 13-16 are sent straight into sexual exploitation or slave labour, or they are massacred or disappeared, or become hired killers,” said Pantoja of the Saltillo shelter.

In the United States, the law stipulates that children must be processed within 72 hours of their detention. The solution for most of them is for a relative to legally claim them, or to stay in shelters for a long time. When they reach their 18th birthday they must be deported.

On Jun. 30, Obama announced that his migration reform had met with stalemate in the House of Representatives, dominated by the rightwing opposition Republican Party, and that he would rely on executive action from now on to try to solve the crisis.

But there is no simple solution to the problem. According to the Honduran authorities, 3,000 children have dropped out of school so far this year in order to pursue the “American dream.”

“In Garifuna communities on the north coast of the country, many children are dropping out of classes because they are leaving the country with their parents or private persons, en route to the United States,” Honduran newspaper La Tribuna said on Jun. 28.

“The rumour spread like wildfire, and now there seems to be no stopping it,” said Guadalupe González at the Irapuato shelter, while two young Honduran women walk away, convinced that if they get to the border, all they have to do is say they are underage in order to get across it.