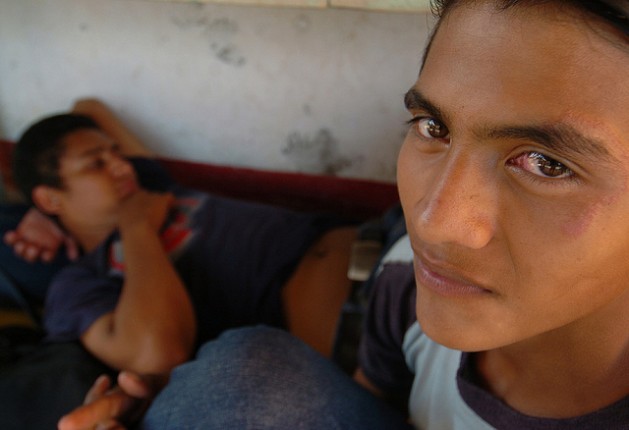 WASHINGTON, Jun 30 2014 (IPS) - Facing what some have dubbed a refugee crisis, President Barack Obama is asking for new powers that would significantly speed up the deportation process for tens of thousands of unaccompanied children recently arrived at the southern U.S. border.

In a letter to lawmakers on Monday, the president requested some two billion dollars in increased funding, particularly to “surge” law-enforcement response. He also asked that laws be changed to allow federal agents to interview and deport within a matter of days many of 52,000 unaccompanied minors that have arrived in recent months from Central America, particularly from Guatemala, Honduras and El Salvador.

"We could be sending back hundreds to thousands of children who will be in danger in their home countries." -- WOLA's Adam Isacson

While the president noted that “appropriate care” would be offered to those who have been apprehended, he also made clear that a central focus of new U.S. policy on the issue will involve stemming the sudden influx.

The U.S. will take “aggressive steps to … deter both adults and children from making this dangerous journey, increase capacity for enforcement and removal proceedings, and quickly return unlawful migrants to their home countries,” the president stated in the letter.

Indeed, the letter’s repeated use of the words “aggressive” and “deterrence” underscore not only the politics involved in the new policymaking, but also the siege-like mentality to which the president is now giving voice. The request came just hours before Obama announced that a broad attempt to overhaul the United States’ immigration system had failed, at least for this year, in the face of ardent political polarisation.

Congress is currently out of session, so the president stated that full details on his request would come after lawmakers reconvene in mid-July.

“What I don’t see here is any change in strategy – just a doubling-down on what they’ve done before. A lot of this looks like it will be aimed at helping those in charge of deporting people do their job more quickly,” Adam Isacson, a senior associate for regional security policy at the Washington Office on Latin America (WOLA), a think tank here, told IPS.

“That has some form of deterrent message, but the danger is we could be sending back hundreds to thousands of children who will be in danger in their home countries. It doesn’t appear that there will be any increase in [funding for] asylum lawyers.”

Immigration advocates responded to the president’s proposal with immediate concern, warning that the move would force potentially endangered children into an untenable situation.

“Children will arrive traumatised, hungry, unable to speak the language, and yet they will be expected to articulate some fear of return if they’re to be allowed to come in to the U.S. That is grossly unfair and fails to recognise their capacities as children to negotiate these processes,” Wendy Young, the president of Kids in Need of Defense, a group that offers legal assistance in such situations, told journalists Monday.

“These children will have no access to counsel – nobody to advise them. It takes [Young’s office] hours and even days to understand the proceedings they’re facing, but to do this at the border with no assistance is simply impossible.”

Since the mid-1990s, federal officials have been unable to “fast track” deportations for migrant children from anywhere except for Mexico and Canada. The president’s proposal would now do away with this safeguard, to extend this authority to cover migrants from non-contiguous countries.

Yet advocates say nothing has changed with regard to the law’s original intent.

The president’s proposal would roll back the due process rights of the most vulnerable members of our society,” Marielena Hincapie, the executive director of the National Immigration Law Center, a legal advocacy group, said in a press call following the president’s announcement.

“If Congress were to authorise these changes, the administration would be shunting children right back to the dangers the have escaped without having the opportunity to present their case in court.”

At the heart of the U.S. policy debate over the ongoing influx of minors is a war of contextualisation. Are children being pulled towards the United States due to lax U.S. policy or are they being pushed out of their home countries due to an increase in violence?

How lawmakers and the broader public analyse that question influences views on whether the government should be treating the issue as a migration problem or, as some are suggesting, a refugee crisis.

“The administration clearly thinks the [motivator] is something other than violence, or they wouldn’t be proposing new changes in law. But we found that kids are fleeing violence and fleeing for their lives,” Kevin Appleby, director of migration policy at the U.S. Conference of Catholic Bishops, said Monday, discussing findings by his office from November.

Appleby suggests that organised crime networks in several Central American countries have significantly increased their influence over the past half-decade.

“Children are being specifically targeted by organised crime networks … at the threat of death,” he said. “This is what is really pushing these children more.”

“Unaccompanied children from El Salvador, Guatemala and Honduras have multiple reasons for leaving, but fear of violence is the tragic, common factor,” Leslie E. Velez, a U.N. protection officer, told lawmakers, according to prepared remarks.

“Shockingly, 58 percent of the children cited violence in their home countries as at least one key reason for leaving. This number varied by country: El Salvador (72%), Honduras (57%) and Guatemala (38%).”

Velez also warned that unaccompanied children expressing such fears cannot be sent back to their home countries without “access to proper asylum procedures”. (The U.N. was unable to comment on President Obama’s new proposal by deadline.)

A relatively unaddressed question remains how the United States will work to address these root causes of the new migration flows. Recent appropriations bills in Congress have significantly increased security aid for Central America, though it is not yet clear how this will be spent.

“My fear is that you’ll see a big build-up of border security capacities in those countries, adding new weaponry and lethal skills to unreformed security forces in a very non-transparent way,” WOLA’s Isacson says.

“We’ve seen it repeatedly in the past – in an atmosphere of impunity, adding more boots on the ground can be disastrous.”

President Obama has also directed two federal agencies to come up with new recommendations for dealing with the recent influx of child migrants. Those studies are expected by the end of the summer.