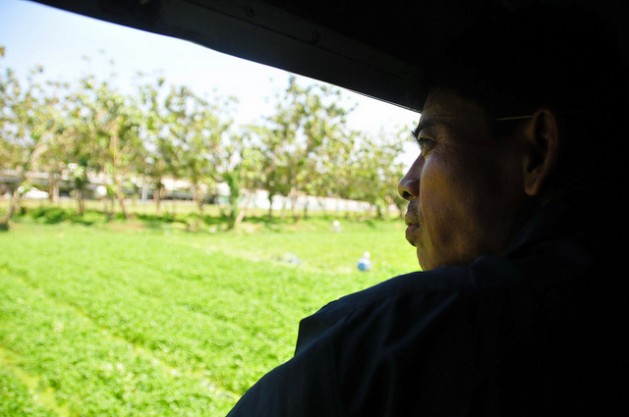 WASHINGTON, Aug 14 2014 (IPS) - Civil society groups are split over a decision by the U.S. government to waive sanctions on Myanmar’s timber sector for one year.

The decision, which went into effect late last month, is being hailed by some as an opportunity for community-led and sustainability initiatives to take root in Myanmar, where lucrative forestry revenues have long been firmly controlled by the military and national elites. The European Union, too, is currently working to normalise its relations with the Myanmarese timber sector.

“The concern is that the system that is gaining traction with the international timber industry is to bypass any national systemic forestry reform process.” -- Kevin Woods of Forest Trends

Yet others are warning that Washington has taken the decision too soon, before domestic conditions in Myanmar are able to support such a change.

“Lifting sanctions on the timber industry now appears to be a premature move by the U.S., and risks lessening Burma’s impetus towards reform,” Ali Hines, a land campaigner with Global Witness, a watchdog group, told IPS.

“Burma is not yet in a position to state convincingly where and how timber is sourced, meaning that U.S. importers and traders have little way of knowing whether Burmese timber is illegal, or linked to social or environmental harm.”

In June, Washington granted a limited one-year license to the 200 members of the U.S.-based International Wood Products Association (IWPA) to engage in transactions with the Myanma Timber Enterprise, the state logging agency. U.S. officials say the aim of the decision is to allow U.S. companies and customers to help strengthen reforms in the Myanmarese timber trade, hopefully promoting transparency and building nascent sustainability practices.

“Interaction with responsible business can help build basic capacity so that Burma can begin to tackle the long-term systemic issues present in its extractive sectors,” Kerry S. Humphrey, a media advisor with the U.S. State Department, told IPS.

“The State Department has been in consultations with IWPA to ensure that any trade conducted under this license is in line with U.S. Government policies, including promoting sustainable forest management and legal supply chains.”

Humphrey notes that IWPA will now be required to file quarterly reports with the State Department on its “progress in helping to ensure legal timber supply chains”.

Yet critics worry this will simply create two parallel timber sectors, one licit and another that is little changed. The industry, as with Myanmar’s broader extractives sector, has long been notorious for deep corruption and human rights abuses.

“The concern is that the system that is gaining traction with the international timber industry is to bypass any national systemic forestry reform process,” Kevin Woods, a Myanmar researcher with Forest Trends, a watchdog group, told IPS.

Instead, Woods says, the end result could be to “create a wall around a few government-managed timber reserves to feed global tropical timber demand, leaving the rest of the country’s forests located in ethnic conflict zones to be continually pillaged and sold across its borders.”

Nearly a half-decade after Myanmar began a stuttering process of pro-democratic reform, many today are increasingly concerned that this process is slowing or even reversing course. Late last month, 72 members of the U.S. Congress warned U.S. Secretary of State John Kerry that conditions in the country have “taken a sharp turn for the worse” over the past year and a half.

Kerry was in Myanmar over the past weekend, where he reportedly raised U.S. concerns over such regression with multiple top government officials.

Yet he also rejected concerns that Washington is “moving too quickly” in rolling back punitive bilateral sanctions on Myanmar. He had gone through “a long list of challenges” with Myanmarese officials, Kerry told journalists Sunday, “in a very, very direct way”.

With the removal of sanctions, however, many worry that Washington is losing important leverage. In the timber sector in particular, some question the extent to which U.S. and other foreign companies will have the wherewithal, or interest, to effect change on the ground in Myanmar – particularly given the tepid commitments made by the country’s government.

“This is not the time for U.S.-based timber importers to be investing in Burma,” Faith Doherty, a senior campaigner at the Environmental Investigation Agency, a watchdog group, told IPS.

“Secretary Kerry … raised serious questions as to the backsliding of reforms and continuing human rights abuses within the country – how do companies within the IWPA think they are able to avoid contributing to these issues that are prevalent throughout the timber sector?”

Indeed, some observers suggest that Myanmar’s opening-up has been accompanied by a sense of free-for-all.

“Illegal logging and natural resource grabbing, including land, in ethnic states and regions … have become worse since the reforms started and the influx of foreign investment into the country,” Paul Sein Twa, with the Burma Environmental Working Group, an advocacy organisation, told IPS.

“Remember, we are still in a fragile peace-building period and there is no rule of law in the conflict areas. So our recommendation is to go slowly on reforming law and policies – to open up more space, engage with civil society organisations and the ethnic armed groups.”

Any ultimate success in reforming Myanmar’s forestry sector will depend on future actions by both the country’s government and the foreign companies that end up purchasing the country’s timber. Yet some are applauding the lifting of U.S. sanctions as an important opportunity to finally begin the work of reform.

“The problem with sanctions is that they restrict buyers in our country from engaging in the sector – the international marketplace, which today includes strong preferences for sustainable products, is inaccessible,” Josh Tosteson, a senior vice-president with the Rainforest Alliance, a group that engages in the certification of tropical forest products, told IPS.

“Particularly if the lifting of sanctions comes along with some commitments from significant buyers to work cooperatively to support and incentivise the march toward sustainability certification, that can inject some real energy to drive this process forward.”

This week, the Myanmar Forest Department accepted a proposal from the Rainforest Alliance for a pilot production community forest in the country’s south.

“Having market mechanisms there that provide a minimum preference and a new market norm that won’t allow anything other than responsible or sustainably produced products to enter the market – that will be the key element,” Tosteson says.

“Particularly in intra-Asian trade you’ll need to have buying companies get on board with these norms. That will be a significant challenge, but if they’re not stepping up to create these new market norms no other efforts will matter – illicit products will simply flow through the routes of least resistance.”