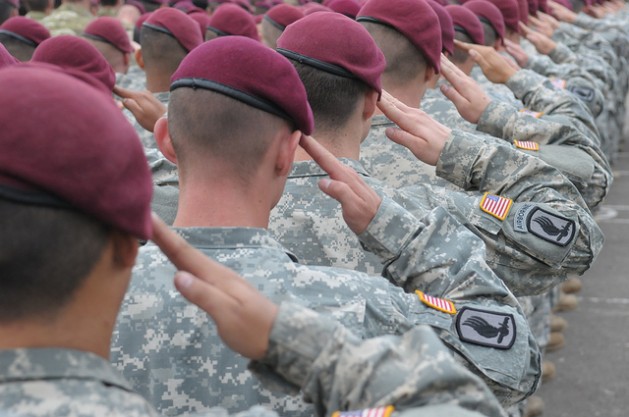 WASHINGTON, Sep 8 2014 (IPS) - The NATO summit that took place at the end of last week in Wales was supposed to celebrate the end of a long, draining war in Afghanistan. But with the presidential election still up in the air in Kabul, NATO couldn’t enjoy its “mission accomplished” moment.

Instead, the assembled ministers took steps to accelerate two new conflicts, one on its borders and the other in the distant Middle East.

"It seemed to me that the Summit offered an alternative vision of a period of intense geopolitical and arms rivalry that could soon prove as dangerous as the one that occupied our attention during the Cold War.” -- Ian Davis

NATO members have certainly not welcomed either the growing confrontation with Russia over Ukraine or with ISIS over the future of Iraq and Syria. But these developments have nevertheless provided the transatlantic alliance with greater purpose and cohesion than it has experienced in years.

The war in Afghanistan, after all, was not just costly in terms of money spent, lives lost, and objectives unmet. It also opened up various rifts in the alliance over strategy and resources.

Meanwhile, with European military spending on a downward trajectory over the last couple years, the vast majority of NATO members are not meeting their obligation of spending two percent of GDP on defence.

But the potential of the Ukraine conflict in particular to spill over into NATO territory has pumped new fire into the 65-year-old alliance’s veins.

In Wales, NATO agreed to a rapid reaction force – essentially a redesign of part of the already existing NATO Response Force — that would keep several thousand troops on standby to deploy in an emergency.

Designed to respond within 48 hours to a threat to the Baltic members, the force can be deployed anywhere in the world. The UK has already committed to providing a substantial contingent for this force.

NATO also upgraded Georgia to an “enhanced-opportunities partner,” which will involve the creation of a NATO training centre in the Caucasus country.

Despite these moves, NATO showed a measure of caution in not pushing too aggressively against Russia.

Although the Ukrainian government has also asked to join NATO, that option is currently not on the table. The alliance also decided not to send arms to the government in Kiev, though individual members can opt to do so.

Despite Ukraine’s announcement that several countries have decided to send lethal assistance, four of those countries, including the United States, immediately issued denials.

NATO didn’t agree to Poland’s request for a permanent force of 10,000 NATO troops stationed on its territory. Nor did it accede to a proposal from the Baltic nations to reorient missile defense against Russia.

“The NATO leaders clearly struggled over how strongly to push back against Russia,” observes Ian Davis, director of NATO Watch in the United Kingdom.

“While some no doubt argued against an overreaction that would risk military confrontation, it is clear that deterrence against Moscow is once again NATO’s top priority (despite the U.S. push for a coalition to combat ISIS). And the proposed limited buildup of forces along the latest East-West divide will take the ‘border’ hundreds of miles closer to Moscow than it was in the Cold War era.”

Joseph Gerson, who works with the American Friends Service Committee, agrees. “With the multiple military exercises across Eastern Europe and the Baltics, increased deployments in the region, and further military cooperation with Georgia and likely Ukraine, the United States has used the Ukraine crisis to more deeply integrate Eastern Europe into the U.S./NATO sphere.”

Gerson adds, “Also note Sweden and Finland are now to be NATO ‘host’ nations, though formally not yet full NATO members. The United States and NATO have been doing a host of military exercises in Sweden for some years, and there’s an electronic communications/intelligence base in Sweden’s north.”

The other major issue on NATO’s plate in Wales was addressing the challenge of ISIS in Syria and Iraq. The United States used the summit to pull together a “core coalition” of nine countries to coordinate a military response.

The strategy will be more of what the United States has already pursued, namely air strikes and support for forces already on the ground such as the Kurdish peshmerga and the Western-allied Syrian rebels.

The Barack Obama administration clearly stated that it would not send U.S. combat troops into the conflict.

Meanwhile, given Russia’s support for Bashar al-Assad in Syria and its opposition to radical Islam, the fight against ISIS offers the possibility of cooperation between Moscow and NATO.

But even with a fragile ceasefire in place between the Ukrainian government and the pro-Russian separatists, ties remain frayed between NATO and Russia. Most NATO members maintain sanctions against Russia, and the European Union is pushing through a new round to target additional Russian firms and officials.

Ian Davis is pessimistic on the prospects of exiting the spiral of conflict. “The decisions taken at the Summit raise the prospect of continual and possibly escalating NATO-European-Russian tensions,” he concluded.

“At some point, a ‘grand compromise’ between the United States, Europeans, and Russia will be required in which U.S., EU, and Ukrainian ‘vital’ interests and those of Moscow are eventually redefined and reconciled.

“But it seemed to me that the Summit offered an alternative vision of a period of intense geopolitical and arms rivalry that could soon prove as dangerous as the one that occupied our attention during the Cold War.”