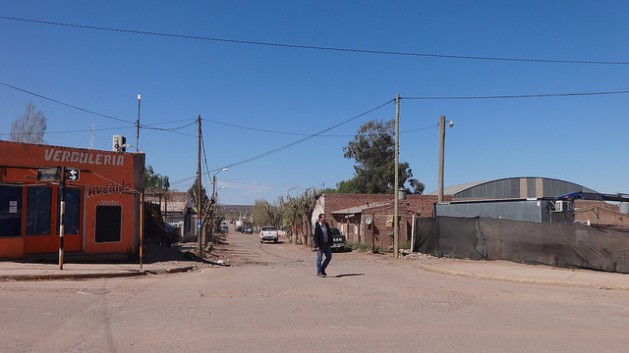 The main street of Añelo, a remote town in Argentina’s southern Patagonia region which is set to become the country’s shale oil capital. In 15 years the population will have climbed to 25,000, 10 times what it was just two years ago. Credit: Fabiana Frayssinet/IPS

AÑELO, Argentina, Oct 23 2014 (IPS) - This small town in southern Argentina is nearly a century old, but the unconventional fossil fuel boom is forcing it to basically start over, from scratch. The wave of outsiders drawn by the shale fuel fever has pushed the town to its limits, while the plan to turn it into a “sustainable city of the future” is still only on paper.

The motto of this small town in the province of Neuquén is upbeat and premonitory: “The future found its place.”

But for now the town’s roads, most of which are unpaved and throw up clouds of dust from the heavy traffic of trucks and luxury cars driven by oil company executives, contradict that slogan.

“Many eyes around the world are on Añelo, but unfortunately we don’t have a good showcase, to put us on display,” the director of the town’s health centre, Rubén Bautista, told IPS.

“We are living on top of black gold, they take riches out of our soil, but they leave practically nothing to the local population,” added the doctor who, along with three other colleagues, covers the health needs of a population that doubled, from 2,500 to 5,000, in just two years.

Añelo, a bleak town on the banks of the Neuquén river surrounded by fruit trees, goats and vineyards, is the town closest to the Loma Campana shale oil field, which is being worked by Argentina’s state oil company YPF and the U.S.-based Chevron.

It is only eight km from the oil field, which is part of new riches that hold out the biggest promise for revenue to fuel the country’s development: Vaca Muerta, a 30,000-sq km geological reserve that is rich in shale oil and gas and has made this country the second in the world after the United States in production of unconventional fossil fuels.

But the black gold is not shining yet in Añelo – which means forgotten place in the Mapuche indigenous language – located some 100 km north of Neuquén, the provincial capital.

The health centre, which refers serious cases to hospitals in the provincial capital, has just two ambulances, while 117 companies from across the planet are setting up shop in and around the town.

“They are people who come to Añelo with the idea of finding a better future…thinking about what unconventional fossil fuels could mean in their lives,” YPF Neuquén’s communications manager, Federico Calífano, told IPS.

YPF alone has 720 employees in the area. The workers come from nearby towns as well as other provinces, and from abroad, brought in by international companies in the construction, chemistry, hotel, transportation and services industries.

The town’s only hotel is full, and camps spring up on any flat area, with containers turned into comfortable temporary lodgings for the workers. Rent for a small apartment is five times what people pay in the most expensive neighbourhoods in Buenos Aires.

“We are building a city from scratch,” Añelo Mayor Darío Díaz told IPS, although he pointed out that even before the shale boom the town was “a strategic waypoint.”

YPF has been exploiting unconventional fossil fuels in the region since the 1980s, but “when their work was done they would leave,” Díaz explained. “This is much more intensive; there will be a lot of work over the next 30 years.”

“The town has infrastructure for around 2,500 inhabitants. It is too small now given the new demand for basic services like water, electricity, roads, and dust emission,” the province’s environment secretary, Ricardo Esquivel, told IPS.

The sound of hammering and pounding is constant. Two workers, who make the 120-km commute back and forth every day from Cipolletti, in the neighbouring province of Río Negro, are working on a new sidewalk. “It’s spectacular.There’s a lot of work here for everyone. More people are needed. The problem is housing,” construction worker Esteban Aries told IPS.

The YPF Foundation carried out an “urban footprint” study which gave rise to the Añelo Local Development Plan. The plan has the support of the Inter-American Development Bank (IDB) and its Emerging Sustainable Cities Initiative.

Carried out together with the local and provincial governments, the plan outlines different growth scenarios with the aim of assessing the risks and vulnerabilities of the area.

It addresses, among other aspects, “what surface area the city should have, how the urban planning process should start, what the diagram should look like, what services are needed – what Añelo is going to need today and in two, three, or five years,” Calífano said.

YPF reported that the work had already begun, including an expansion of the sanitation system, construction of homes for doctors, and a vocational training centre, linked to the needs of the oil industry. Primary healthcare clinics were set up in two trailer trucks – although Dr. Bautista said that’s not enough.

The economic growth has brought heavy traffic. The government is planning a two-lane highway to Vaca Muerta, on the so-called “oil route”, to keep the trucks out of the town.

“The steadily growing number of accidents is overwhelming,” Bautista said. The average has increased from 10 traffic and work-related accidents a month two years ago to 17 today.

“You have to keep in mind that most of the activity has been going on for a year,” said Pablo Bizzotto, YPF’s regional manager of unconventional fuels in Loma Campana, where some 20 wells are drilled every month, which has driven production up from 3,000 to 21,000 barrels per day of oil.

“There are things that we will obviously work out together with the authorities, as we go. This is all very new,” he said.

Agricultural engineer Eduardo Tomada left everything behind in Buenos Aires and invested his savings to open up a restaurant in Añelo, which is now packed with workers.

His cook, local resident Norma Olate, said she was happy because she’s earning more. But she nostalgically remembers when her town was “practically a sand dune.”

Development has brought work, “but also bad things,” the 60-year-old Olate told IPS. “There have been armed robberies, which we didn’t see here before.”

Olate, who has young, single daughters, said she is also worried about “the invasion of men.”

“So many men!” she said, laughing. “I’m not interested anymore, but the girls…there are guys who come and deceive them, a lot of them end up pregnant….that’s bad for the town too.”

Provincial lawmaker Raúl Dobrusín of the opposition Popular Unity party denounced the rise in prostitution, drug trafficking and use, alcoholism and corruption.

“We say the only things modernised in Añelo were the casino and the brothel,” he said ironically.

Dobrusín complained about the government’s lack of “planning” and “control” over these and other problems, such as real estate speculation and prices that are now unaffordable for many people in the town.

Nevertheless, for Mayor Díaz the balance is positive. “We have to take advantage of this opportunity for Añelo to develop as a town and improve the living standards of our people. What worries me is whether we will make the necessary investments quickly enough,” he said.

The province is preparing a “strategic development plan” for Añelo, along with nearby “oil micro-cities”, which will include the construction of an industrial park, schools, hospitals, roads and housing, and increased security.

“We’re not going to build an oil camp in Añelo without a city,” the mayor summed up.