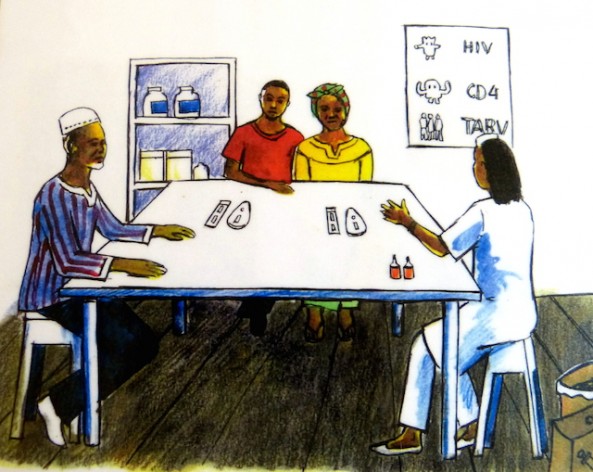 Testing, treating and suppressing viral load in massive numbers could curb the spread of AIDS by 2020. Credit: Mercedes Sayagues/IPS

NAIROBI, Oct 17 2014 (IPS) - Although AIDS has defied science by killing millions of people throughout Africa in the last three decades, HIV experts now believe that they have found the magic numbers to end AIDS as a public health threat in 15 years.

The new treatment targets seek that, by 2020:

The 90-90-90 plan, unveiled by the Joint United Nations Programme on HIV/AIDS (UNAIDS) earlier this year, seeks to halt the spread of HIV by 2020 and to end the epidemic by 2030.

While this is the most ambitious strategy to eliminate HIV yet, experts such as Dr Lucy Matu, director of technical services at the Elizabeth Glaser Paediatric AIDS Foundation in Kenya, says that it can be done.

She told IPS that in Kenya 72 percent of the estimated total number of people living with HIV have been tested, and 76 percent of the 880,000 adults and children diagnosed with HIV were on ART by April 2014.

Kenya will get closer to the 90-90-90 target as it implements the 2013 World Health Organisation (WHO) guidelines, which increased the CD4 count threshold to start ART from 350 to 500, says Matu.

As eligibility for ART becomes broader, she explains, “it will push the number of people on ART up by at least 250,000 to 300,000 to at least 90 percent of those in care, and of course more people will continue to enroll in care.”

The WHO guidelines build on the clinical benefits of starting ART earlier. Patients stay healthier and avoid opportunistic infections, such as pneumonia, meningitis and TB.

Kenya is not the only country on track to achieving the ambitious 90-90-90 targets. In Botswana, which has a very high adult HIV prevalence, surpassed only by Swaziland globally, more than 70 percent of people living with HIV are on ART.

Rwanda, Uganda, Zambia, Malawi and Swaziland are “finalising their national guidelines while others like South Africa are planning to implement the new guidelines next year,” she told IPS.

Gouws-Williams believes that the 90-90-90 plan is attainable.

90-90-90: the formula that experts believe could write the final chapter on AIDS in 15 years. Courtesy: UNAIDS

Testing is the first step

Only half of all people living with HIV in sub-Saharan Africa have been diagnosed, says UNAIDS, so getting them to test is the first step.

Studies in Kenya and Uganda show that including HIV testing in multi-disease campaigns drove coverage up by 86 percent and 72 percent respectively.

But experts caution that the targets are more than putting loads of people on ART. Attaining viral suppression is key.

“In Rwanda, 83 percent of people receiving ART were found to be virally suppressed after 18 months of therapy,” says Gouws-Williams.

In Zimbabwe, Dr Agnes Mahomva, country director for the Elizabeth Glaser Paediatric AIDS Foundation, told IPS that 90-90-90 is not too ambitious for the Southern African country.

Already, she told IPS, “HIV positive pregnant and breast feeding mothers are universally eligible for ART for life as well as HIV positive children below five years, regardless of their CD4 count.”

While many experts are optimistic that 90-90-90 targets will be met, Ugandan HIV activist Annabel Nkunda says the targets do not necessarily speak to each other.

Nkunda told IPS that many HIV positive people, “when put on treatment, do not adhere to the treatment because of stigma.”

Without a specific target to reduce stigma, she says, “no amount of intervention will get us to zero HIV/AIDS.”

While it is still too early to estimate how much countries will spend to make 90-90-90 work, the consensus is that a lot of resources will be needed. Already, some African countries are exploring innovative financing options such as AIDS tax levies and national HIV trust funds.

Gouws-Williams points out that ART has become far more affordable. In Malawi, it costs less than 100 dollars per person per year.

Mahomva adds that a strong community component is needed, “because this is where several bottlenecks such as stigma happen, compromising adherence to HIV treatment.”

In spite of the uphill task ahead, many are optimistic that 90-90-90 will write the final chapter of the AIDS epidemic.