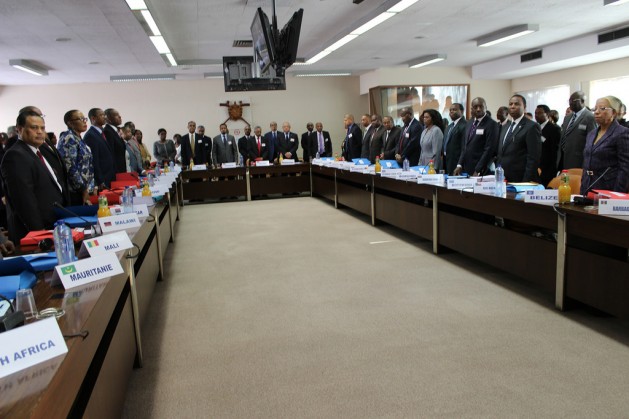 The 100th session of the ACP Council of Ministers, held in Brussels from Dec. 9 to 12, discussed prospects for a meaningful partnership with the European Union. Credit: Courtesy of ACP

BRUSSELS, Dec 12 2014 (IPS) - “There are still prospects for a meaningful ACP-EU partnership, capable of contributing and responding concretely and effectively to the objectives of promoting and attaining peace, security, poverty eradication and sustainable development,” according to the top official of the African, Caribbean and Pacific Group of States (ACP).

ACP Secretary General Alhaji Muhammad Mumuni was speaking at the 100th session of the ACP Council of Ministers held here from Dec. 9 to 12, during which ACP and European Union representatives took the opportunity to renew their commitment to working closely together, particularly in crafting a common strategy for the post-2015 global development agenda.

Besides discussing trade issues, development finance, humanitarian crises and the current Ebola crisis, the two sides also tackled future perspectives and challenges for the ACP itself and for its partnership with the European Union.

“We must speed up our efforts. 2015 will not be the end of the road. The 2015-post development agenda presents us with the chance to go even further. We can play a role together. This is why the Joint ACP-EU Declaration on the Post-2015 Development Agenda … is so valuable” – European Development Commissioner Neven Mimica

It was agreed that comprehensive cooperation built on collaborative approaches, creative methods and innovative interventions in all the countries of the ACP will be the inspiration for a joint initiative in 2015, in the context of the celebration of the 40th anniversary of the Lomé Convention, the trade and aid agreement between the ACP and the European Community first signed in February 1075 in Lomé, Togo, and the forerunner to the Cotonou Agreement.

The European Union will also be celebrating European Year for Development in 2015, which is also the deadline year for the United Nations’ Millennium Development Goals (MDGs).

The convergence of these three events, and the anticipated adoption by the international community of the development framework which is to replace the MDGs, “together represent a unique opportunity for the ACP and the European Union to demonstrate in a concrete fashion that they have and continue to strive for impactful relations in the future,” said Bhoendratt Tewarie, Minister of Planning and Sustainable Development of Trinidad and Tobago, who chairs the ACP Ministerial Committee on Development Finance Cooperation.

While acknowledging the current economic and financial difficulties being experienced by the European Union and the efforts under way to address them, it was stressed that these do not undermine the validity and strength of the ACP-EU partnership, that the rationale behind the partnership remains valid and that efforts must be redoubled for mutual benefit.

Proof of the commitment to help ACP countries meet the objectives of the Cotonou Agreement was identified in the concrete efforts being undertaken by both sides to improve the quality of life of the most impoverished and vulnerable countries – as  well as other countries, including middle income and upper middle income countries – of the ACP which continue to experience serious developmental challenges.

European Commissioner for International Cooperation and Development Neven Mimica said that the post-2015 development agenda and the post-Cotonou framework – to succeed the current ACP-EC Partnership Agreement signed in Cotonou, Benin, in 2000 – “will shape development policy for the next decade.”

“We can agree on the need for an enhanced approach, building further on our partnership, incorporating overarching principles, such as respect for fundamental values, and taking account of specific realities in countries and regions,” he told the meeting.

The Council of Ministers’ session was also the occasion for ACP members to meet with members of the new European Commission, which took office on Nov. 1, including the High Representative of the European Union for Foreign Affairs and Security Policy, Federica Mogherini, Development Commissioner Mimica as well as European Commissioner for Humanitarian Aid and Crisis Management, Christos Stylianides.

Under the new Commission, the eleventh edition of the European Union’s main instrument for providing development aid to ACP countries, the European Development Fund, has been approved for the period 2014-2020 fora total of 31.5 billion euro, but has not yet entered into force.

Pending a further six ratifications on the European side, which are expected by mid-2015, a “bridging facility” amounting to 1.5 billion euro sourced from unused funds from previous EDFs, will allow priority actions to continue in ACP countries in 2014 and 2015.

To date, 53 national indicative programmes (worth up to 10 billion euro for the period 2014-2020) have been signed, with the remaining programmes to be signed by early 2015.

“But we must not be complacent,” said Mimica. “We must speed up our efforts. 2015 will not be the end of the road. The 2015-post development agenda presents us with the chance to go even further. We can play a role together. This is why the Joint ACP-EU Declaration on the Post-2015 Development Agenda, which was adopted last June in Nairobi, is so valuable.”

The Joint Declaration represents the springboard for building greater consensus and contributing towards meaningful and ambitious outcomes in July and September next year, looking forward to a post-Cotonou framework.

“Transforming the ACP Group into a Global Player”

Meanwhile, the ACP Group is currently reflecting on its institutional aspects, such as leadership, organizational mandate, and implementation of reforms which aim at making it a more effective and accountable stakeholder in the international political context, while working on reducing poverty and promoting sustainable development in member states. 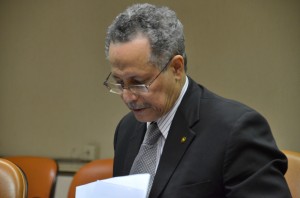 An Eminent Persons Group has been established and a report will be presented to the next ACP Summit with the aim of identifying the most suitable strategic approach for ACP to be more effective, more visible, more accountable in a world of partnership and ownership, incorporating overarching principles such as respect for fundamental values and taking into account the specificities of the realities in countries and regions.

An important sign of the ACP institutional change was also launched during the 100th Council of Ministers with the appointment of the new Secretary General, Patrick Gomes, who will head the ACP Secretariat from 2015 to 2020, a landmark period covering the latest part of the ACP partnership agreement with the European Union.

Gomes is the Ambassador of Guyana to the European Union and the Kingdom of Belgium and the country representative to the WTO, FAO, and the IFAD.

Gomes has led various high-level ambassadorial committees in the ACP system, currently serving as Chair of the Working Group on Future Perspectives of the ACP Group, which transmitted a final report on “Transforming the ACP Group into a Global Player” during the ACP Council of Ministers.