Amanda Ufheil-Somers is the assistant editor of Middle East Report, published by the Middle East Research and Information Project, MERIP.org. 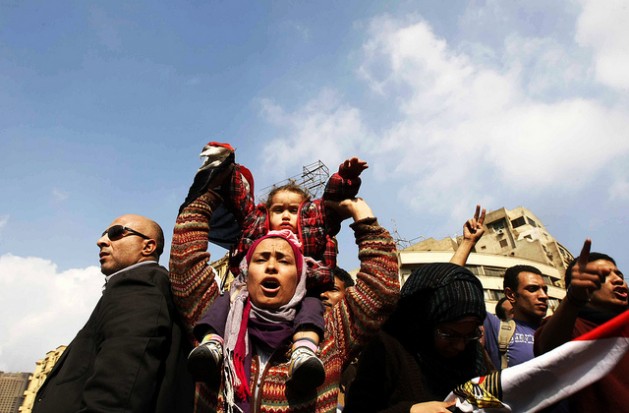 WASHINGTON, Jan 5 2015 (IPS) - For a moment, four years ago, it seemed that dictators in the Middle East would soon be a thing of the past.

Back then, it looked like the United States would have to make good on its declared support for democracy, as millions of Tunisians, Egyptians, Bahrainis, Yemenis, and others rose up to reject their repressive leaders. Many of these autocrats enjoyed support from Washington in return for providing “stability.”

Yet even the collapse of multiple governments failed to upend the decades-long U.S. policy of backing friendly dictators. Washington has doubled down on maintaining a steady supply of weapons and funding to governments willing to support U.S. strategic interests, regardless of how they treat their citizens.

Four years after Egyptian dictator Hosni Mubarak’s ouster, for example, the country once again has a president with a military pedigree and an even lower tolerance for political opposition than his predecessor.

With a new year upon us, it’s our turn to face down fear and insist that another path is possible.

Mass arrests and hasty convictions of political activists — over 1,000 of whom have been sentenced to death — have reawakened the fear that Egyptians thought had vanished for good after Mubarak was ousted and democratic elections were held.

When the Egyptian military — led by now-president Abdel-Fattah al-Sisi — deposed the democratically elected president Mohamed Morsi in July 2013, the Obama administration wavered about whether it would suspend military aid to Egypt, which U.S. law requires in the case of a coup. Yet despite some partial and temporary suspensions, the U.S. government continued to send military hardware.

Now that Sisi heads a nominally civilian government — installed in a sham election by a small minority of voters — all restrictions on U.S. aid have been lifted, including for military helicopters that are used to intimidate and attack protesters. As Secretary of State John Kerry promised a month after Sisi’s election, “The Apaches will come, and they will come very, very soon.”

In the tiny kingdom of Bahrain, meanwhile, the demonstrations for constitutional reform that began in February 2011 continue, despite the government’s attempts to silence the opposition with everything at its disposal — from bird shot to life imprisonment.

Throughout it all, Washington has treated Bahrain like a respectable ally.

Back in 2011, for instance, just days after Bahraini security forces fired live ammunition at protesters in Manama — an attack that killed four and wounded many others — President Barack Obama praised King Hamad bin Isa Al Khalifa’s “commitment to reform.” Neither did the White House object when it was notified in advance that 1,200 troops from Saudi Arabia would enter Bahrain to clear the protests in March 2011.

Since then, there’s been a steady drip of troubling news. A State Department report from 2013 acknowledged that Bahrain revokes the citizenship of prominent activists, arrests people on vague charges, tortures prisoners, and engages in “arbitrary deprivation of life.” (That’s bureaucratese for killing people.)

And what have the consequences been?

Back in 2012, international pressure forced the United States to ban the sale of American-made tear gas to Bahraini security forces. And last August, some U.S. military aid was cut off after the regime expelled an American diplomat for meeting with members of an opposition party.

Delaying shipments of tanks, jets, and tear gas amounts to little more than a slap on the wrist when the Fifth Fleet of the U.S. Navy remains headquartered outside Bahrain’s capital. And Bahrain’s participation in air raids against the Islamic State has only strengthened the bond between the regime and the White House.

Indeed, the crisis in Iraq and Syria has breathed new life into the military-first approach that has long dominated Washington’s thinking about the Middle East. Any government willing to join this new front in the “War on Terror” is primed to benefit both from American largesse and a free pass on repression.

People power in the Middle East must be matched by popular demand here in the United States to shake the foundations of our foreign policy. With a new year upon us, it’s our turn to face down fear and insist that another path is possible.

This story originally appeared on Otherwords.org. The views expressed in this article are those of the author and do not necessarily represent the views of, and should not be attributed to, IPS-Inter Press Service.