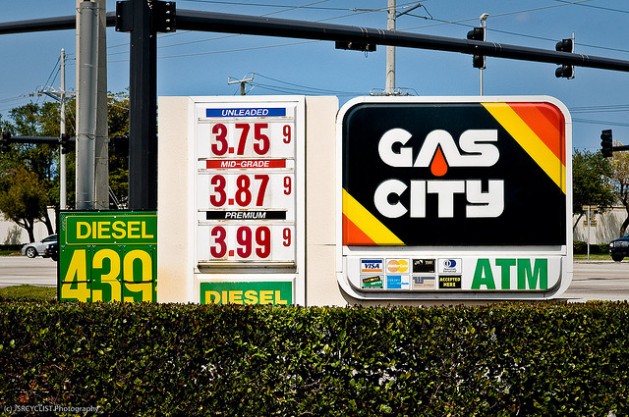 The continuing decline in oil prices has already reduced purchasing power and impacted negatively on some of the world's currencies. Credit/Justin R/cc by 2.0

UNITED NATIONS, Jan 2 2015 (IPS) - In a satirical piece titled ‘An Unserious Look at the Year Ahead’ in the Wall Street Journal last week, Hugo Rifkind predicts the price of a barrel of oil will fall so low that people across the world would start buying oil for the barrel – and throw the oil out.

The journalistic spoof about the oil market may be an improbable scenario, but in reality the sharp decline in prices has generated both good and bad news – mostly bad.

If Middle Eastern sales flatten out or decrease, arms companies may fight harder for contracts in other parts of the world where military expenditure is still on the increase and less dependent on oil prices, such as in North, South East and South Asia.

In the United States, the fall in oil prices is being viewed as an unexpected – but welcome – stimulus to the country’s recession-struck economy.

The London Economist points out that a 40-dollar price cut would shift about 1.3 trillions dollars from oil producers to consumers.

But in the developing world, the current plunge is threatening to undermine oil-dependent economies in Africa, Asia, Latin American and the Middle East.

The continuing decline – from around 107 dollars per barrel last June to less than 70 dollars last month – has already reduced purchasing power and impacted negatively on some of the world’s currencies, including the ruble (Russia), real (Brazil), rupiah (Indonesia), bolivar (Venezuela), naira (Nigeria), peso (Chile), lira (Turkey) and ringgit (Malaysia).

But sooner or later the fall in oil prices is also likely to have a negative impact on both military spending and the thriving multi-billion-dollar arms market in the Middle East.

Perhaps for peace activists, this may be a positive sign in the global campaign for disarmament – mostly in conventional arms.

The exceptions in the Middle East are Israel and Egypt, which depend heavily on U.S. military grants that are gratis and non-repayable.

Pieter Wezeman, a senior researcher at the Arms Transfers and Arms Production Programme, at the Stockholm International Peace Research Institute (SIPRI), told IPS lower oil revenues will undoubtedly put pressure on the military expenditure of Middle Eastern states, as in the past.

Saudi Arabia’s arms imports peaked in the 1990s, he said, but then fell rapidly, partly because of oil price-related lower government revenues.

“However, for 2013, we estimated Saudi Arabia will be the world’s fourth largest military spender [about 67 billion dollars] and the UAE the fifteenth largest [19 billion dollars],” said Wezeman, who closely tracks the Middle Eastern arms market.

The world’s three largest military spenders are the United States (640 billion dollars), China (188 billion) and Russia (88 billion), according to 2013 figures released by SIPRI.

Striking a cautionary note, Wezeman said it is, however, too early to say anything about this with certainty, as the arms procuring states in question tend to be highly secretive and undemocratic about military matters and arms procurement programmes and plans.

“They may very well decide to cut spending in other sectors instead, if lower oil prices force them to cut overall government spending,” he declared.

Unveiling its 2015 budget last week, Saudi Arabia said it was “rationalising” its expenditure, but did not specify any details.

According to estimates by the International Monetary Fund (IMF), Saudi Arabia’s total foreign exchange reserves amount to about 750 billion dollars.

“I do credit some of this decline to the anticipated fall in oil prices,” she said.

For Saudi Arabia, Qatar, Kuwait, and the UAE, this trend will only serve as a nuisance they can comfortably withstand for a few years – “so I do not expect any significant changes in their defence spending tendencies.”

These markets are huge, and they all spend lavishly on building up their defence capabilities, she said.

Saudi Arabia alone has the world’s fourth-largest military budget and will continue to dominate the Middle East arms market, with a defence budget nearly four times the size of the next closest Middle East military investor, she noted.

“I don’t see a major change in Iran and Iraq’s defence spending trends, even though they stand to be the most hurt by this.”

Auger said due to other regional and internal fractures, these two neighbours will have to maintain their defence spending levels as a cautionary measure.

Even though Iran is already suffering from international sanctions with its unresolved nuclear issue, it still feels it is being threatened, and therefore lower defence spending will only make it more vulnerable from its own perspective, she added.

“With Iraq, you may see them lean more heavily on its allies,” Auger said.

SIPRI’s Wezeman told IPS the importance of the Middle Eastern market for arms producing companies is the fact that sales of weapons to Saudi Arabia alone accounted for 20 percent of sales in 2013 for the third largest arms producer in the world, BAE systems.

And the second largest arms producer, Boeing, sees declining sales of combat aircraft to its main client the United States, and is increasingly dependent on exports, he added.

At the same time, Wezeman said, there are signs the military industry in the region is growing too, though it is still small compared to arms industries in the traditional arms producing countries.

If Middle Eastern sales will flatten out or decrease, he predicted, arms companies will have to fight harder for contracts in other parts of the world where military expenditure is still on the increase and less dependent on oil prices, such as in North, South East and South Asia.