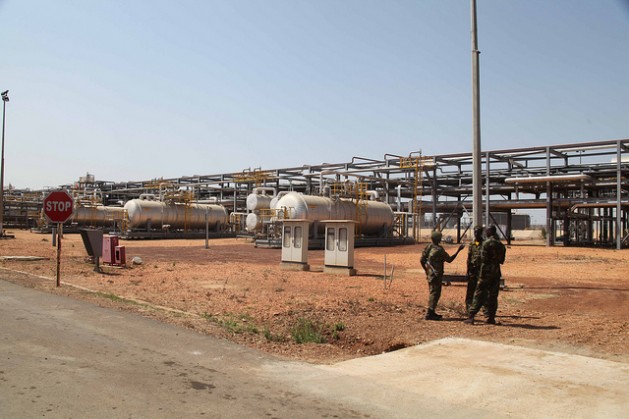 UNITED NATIONS, Dec 23 2014 (IPS) - The sharp decline in world petroleum prices – hailed as a bonanza to millions of motorists in the United States – is threatening to undermine the fragile economies of several African countries dependent on oil for their sustained growth.

The most vulnerable in the world’s poorest continent include Nigeria, Angola, Equatorial Guinea, Gabon and Sudan – as well as developing nations such as Algeria, Libya and Egypt in North Africa.

"In the long run, governments in these oil-exporting countries should use oil revenues to support productive sectors, employment generation, and also build financial reserves when oil prices are high." -- Dr. Shenggen Fan of IFPRI

Dr. Kwame Akonor, associate professor of political science at Seton Hall University in New Jersey, who has written extensively on the politics and economics of the continent, told IPS recent trends and developments such as the outbreak of Ebola and the fall of global oil prices “shows how tepid and volatile African economies are.”

In 2012, for instance, Sierra Leone and Liberia (two of the hardest hit countries with Ebola) were cited by the World Bank as the fastest growing sub-Saharan African countries, he pointed out.

In a similar vein, countries such as Algeria, Equatorial Guinea and Gabon are considered top performing economies due to the large concentration of their oil and gas reserves.

“But the ramifications of any economic crisis will undoubtedly negatively impact the fortunes of these countries,” said Akonor, who is also director of the University’s Centre for African Studies and the African Development Institute, a New York-based think tank.

The world price for crude oil has declined from 107 dollars per barrel last June to less than 70 dollars last week.

There are multiple reasons for the decline, including an increase in oil production, specifically in the United States; a fall in the global demand for oil due to a slow down of the world economy; and a positive fallout from conservation efforts.

As the New York Times pointed out: “We simply don’t burn as much energy as we did a few years ago to achieve the same amount of mileage, heat or manufacturing production.”

There are also geopolitical reasons for the continued decline in oil prices because Saudi Arabia, one of the world’s largest producers, has refused to take any action to stop the fall.

Despite the crisis, the Saudi oil minister Ali Al-Naimi was quoted as saying, “Why should I cut production?”

This has led to the conspiracy theory it is working in collusion with the United States to undermine the oil-dependent economies of three major adversaries: Russia, Iran and Venezuela.

But they are expected to overcome the crisis because of a collective estimated foreign exchange reserve amounting to over 1.5 trillion dollars.

The drop in oil prices, however, will have the most damaging effects on Africa which has been battling poverty, food shortages, HIV/AIDS, and more recently, the outbreak of Ebola.

The heaviest toll will be on Nigeria, the largest economy in Africa which depends on crude oil for about 80 percent of its revenues, according to the Wall Street Journal. The country’s currency, the naira, has declined about 15 percent since the beginning of the fall in oil prices.

Dr. Shenggen Fan, director general of the International Food Policy Research Institute (IFPRI), sees both a positive and negative side to the current oil crisis. He told IPS the recent decline in oil prices will help reduce food prices.

“Now that oil prices are on a downward trend, this is, by and large, good for global food security and nutrition,” he said.

Dr. Fan said poor producers and consumers in developing countries should be able to benefit from this – as long as their purchasing power increases.

Indeed, crude oil producing nations in Africa have felt the pinch of declining oil prices given the dependence of their economies on crude oil, he noted. In the short run, he said, poor people may suffer, if their governments reduce food subsidies.

“In the long run, governments in these oil-exporting countries should use oil revenues to support productive sectors, employment generation, and also build financial reserves when oil prices are high.”

When oil prices are low, these governments should use reserves to ensure that poor people are protected through social safety net programmes, he added.

Dr. Akonor told IPS as impressive as the current and long-term economic projections for Africa might seem, it does not change the precarious and fragile nature of the continent’s economic foundations.

“The high debt overhang and the heavy reliance on raw materials (such as oil) and minerals for exports, makes African economies susceptible to shock and systemic risks,” he noted.

Moreover, he said, the underlying human capital formation, especially amongst the burgeoning unemployed youth population, lacks the requisite skills that could lead to real sustainable growth and transformation.

“What is needed then is the effective implementation of development strategies and policies that would lead to long-term structural transformation and durable human development,” he argued.

One way to achieve this is through closer regional cooperation, given the small size of domestic markets and poor continental infrastructure. Transformative and human needs development must, amongst other things, address Africa’s poor infrastructure, said Dr. Akonor.

“What makes Africa’s development challenges vexing is that there has not been a shortage of autonomous development-related ideas between African leaders and interested publics,” Dr. Akonor said.

One can argue that Africa has debated and produced too many blueprints and programmes for over half a century without any tangible results or follow through, he said.

“Thus the major obstacle to durable economic performance in Africa has not been the ambitious nature of the development targets, but rather the absence of political will by African governments and the lack of consistency, coordination, and coherence at the sub regional, regional and even global levels to implement structural change,” Dr. Akonor declared.

“Transformational development will require that Africa add value to, and diversify, its export commodities. Building a solid industrial base and infrastructural capacity are also necessary prerequisites toward autonomous structural change.”

Dr. Fan told IPS that on the broader issue of the factors that influence food prices, it is important to realise the right price of food is not easy to determine.

What is important is that the prices of food (including the natural resources that are used for food production) fully reflect their economic, social, and environmental costs and benefits in order to send the right signals to all actors along the food supply chain.

“If this causes food prices to increase, social safety nets should be provided to protect poor people in the short term and also to help them move on to more productive activities in the long term,” Dr. Fan said.

In so doing, their food security and nutrition is not compromised, he declared.