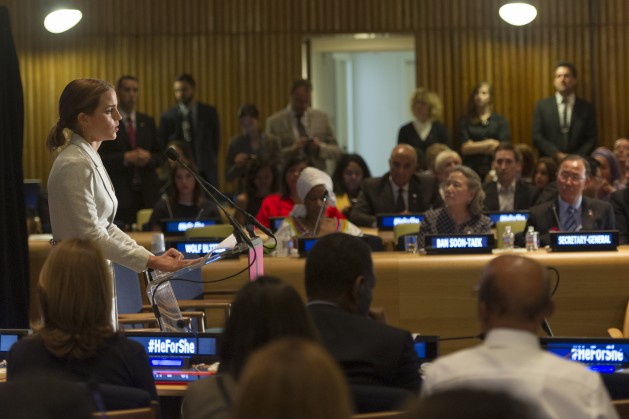 UNITED NATIONS, Mar 10 2015 (IPS) - Two hundred million fewer women have access to the internet than men, according to a report released Monday.

The report published by No Ceilings also said an estimated 300 million fewer women than men own a mobile phone, with these gaps primarily concentrated in developing countries.

Women’s participation and safety online was a popular topic on the first day of the 59th Commission on the Status of Women (CSW) at the United Nations.

The 2015 CSW also coincides with the 20th anniversary of the Beijing Declaration and Platform for Action (Beijing+20), the historic agenda for women’s empowerment. Women’s participation in media and new communication technologies is covered under Section J of the Platform.

Discussions at the CSW covered both the positive and negative impact of information communication technology on progress towards gender equality.

Jan Moolman, Senior Coordinator of the Association for Progressive Communications spoke about how women have achieved empowerment by using the internet.

She said new media helped individuals to construct and represent themselves online. She also said new media offered women “opportunities for movement building” and the “opportunity to leap over many kinds of barriers.”

Moolman added that threats against women online needed to be treated as a freedom of information issue, because they were used to try to silence women when they spoke up on gender equality.

“If we have 52% of the population unable to express themselves freely that is a freedom of expression issue,” Moolman said.

U.N. Women (United Nations Entity for Gender Equality and the Empowerment of Women) are also increasingly using new media with their campaigns. For example through social media campaigns such as HeForShe, infographics and a new monitor of countries which have committed to step-it-up for gender equality.

Speaking about the HeForShe campaign at Facebook Headquarters in London yesterday, U.N. Women Global Goodwill Ambassador Emma Watson spoke about how she herself had received threats after speaking out on gender equality.

“The minute I stepped up and talked about women’s rights I was immediately threatened, I mean, within less than 12 hours I was receiving threats.”

A website was set up with a countdown threatening to release nude photographs of the British actor. Watson said that she knew the website was a hoax, but that the experience helped her friends and family see the need for progress on gender equality.

“I think it was just a wake up call that this is a real thing that’s really happening now, women are receiving threats in all sorts of different forms,” she said.

Watson also said that the threats helped convince her of the importance of campaigning for gender equality.

“If anything, if they were trying to put me off, it did the opposite.”

No Ceilings is an initiative, supported by the Clinton Foundation, which has compiled thousands of data points on gender equality across a range of areas, including access to information and communication technologies.

Women You Should Have Heard of

Another way women’s positive contributions to science and technology was highlighted on International Women’s Day yesterday was through the hashtag #womenyoushouldhaveheardof. The hashtag challenged the assumption that Science, Technology, Engineering and Math (STEM) fields are not suited to women and girls by raising awareness about some of the women who have made historic contributions to science and technology.