Preethi Sundaram is Policy Officer and author of the report and Fiona Salter is a writer, both at International Planned Parenthood Federation. 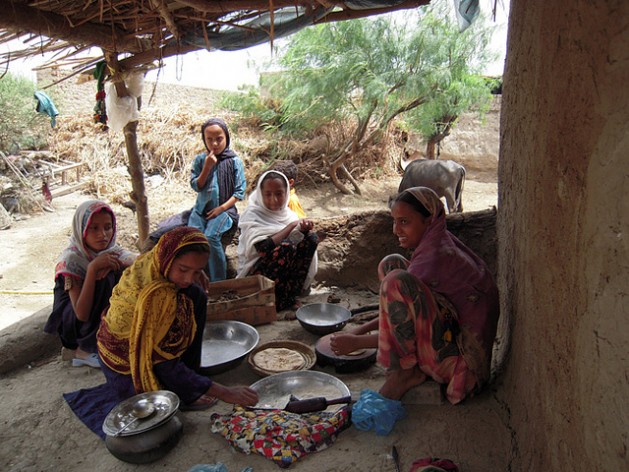 Young girls in the village of Sonu Khan Almani in Pakistan's Sindh province perform most of the household chores, like making bread. Credit: Zofeen Ebrahim/IPS

NEW YORK, Mar 16 2015 (IPS) - It is estimated that women account for two-thirds of the 1.4 billion people currently living in extreme poverty. They also make up 60 per cent of the world’s 572 million working poor.

If you can decide who you live with, what happens to your body and the size of your family, if you are free to make decision about these fundamental rights – only then are you able to participate fully in social, economic and political life.

Around the globe, women and girls continue to have subordinate status, fewer opportunities and lower income, less control over resources, and less power than men and boys.

Son preference continues to deny girls the education they have a right to. And the burden of care work that women face impinges and intrudes on their opportunities in terms of education and career.

Now a new report to be launched by the International Planned Parenthood Federation (IPPF) Mar. 16 in New York examines the links between SRHR and three core aspects of gender equality: social development, economic participation and participation in political and public life.

The reason for the report is to assess objectively what we have long suspected, namely that sexual and reproductive health and rights are critical to achieving equality.

Why? Because when women are able to maintain good health the trajectory of their lives can be transformed.

There are fewer maternal deaths and less reproductive illness; women and girls can realise their sexual and reproductive health and rights, they are free to participate in social, economic and political life.

Stark figures show that the denial of sexual and reproductive health and rights is a cause and consequence of deeply entrenched ideas about what it means to be a man or a woman.

Gender norms leave women and girls at risk and unable to reach their full potential. In some extreme cases, they can kill.

Women die because they cannot access the abortion services they need. Women die of preventable causes in childbirth. Women die at the hands of their violent partners. We see examples of this in all corners of the world.

Sexual and gender-based violence is a major public health concern in all corners of the world. It’s a barrier to women’s empowerment and gender equality, and a constraint on development, with high economic costs.

And then there’s work. The percentage of women working in formal wage employment has increased over the last half century but a striking number of women are still likely to work in the informal economy due to gender inequality.

Across cultures and in all economies, women continue to do the bulk of unpaid care work. Women make up the majority of workers in the informal economy – 83 per cent of domestic workers worldwide are women.

Work in the informal economy can be more insecure and precarious, and can have specific impacts on the sexual and reproductive health and rights of women. For example, lack of regulations can make women more vulnerable to lower wages, limited access to health care, maternity leave or child care and workplace discrimination, including sexual assault.

In virtually every country, men spend more time on leisure each day while women spend more time doing unpaid housework. Women devote 1 to 3 hours more a day to housework than men; 2 to 10 times the amount of time a day to care (for children, elderly, and the sick), and 1 to 4 hours less a day to market activities.

Here, too, women’s sexual and reproductive health and rights are key – true economic empowerment and stability comes from ensuring that regulatory frameworks across both the formal and informal economies take into consideration women’s reproductive lives.

In the political realm gender norms limit women’s opportunities to participate in decision making. As a result, women’s domestic roles are over-emphasised, they have less time to engage in activities outside of the home. This then restricts their influence to informal decision making, which tends to be hidden, or not respected.

Hardly surprising, then, only 1 in 5 parliamentarians is female.

One reason for women’s low participation in public and political life is because party politics and strategic resources are dominated by men.

In addition, women also have to overcome barriers that men don’t, such as poor networking, limits on whether they can travel.

Women voters are four times as likely as men to be targeted for intimidation in elections in fragile states. After all, would you vote if you faced threats on your way to the polling station?

What this report shows is that gender inequality prevents girls and women from reaping benefits and contributing to social, economic and political life.

So what’s the answer? Truth be told, no single approach will work. We have to look at solutions that work for women’s varied and complex lives.

But there is something that we can change – something that goes to the very heart of poverty eradication and development goals. We can uphold sexual and reproductive rights.

Because if you can decide who you live with, what happens to your body and the size of your family, if you are free to make decision about these fundamental rights – only then are you able to participate fully in social, economic and political life.

It’s the freedom from which all other freedoms flow.

Women and girls should have the right and ability to make decisions about their reproductive lives and sexuality, free from violence, coercion and discrimination.

That’s what equality is all about.