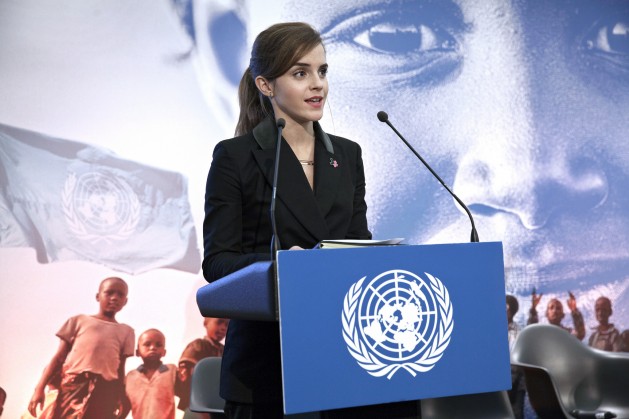 UNITED NATIONS, Feb 17 2015 (IPS) - It launched in a blaze of social media glory with a viral speech that rocketed around the world, and five months on from the launch of U.N. Women’s groundbreaking HeForShe campaign, the real work is well underway.

The campaign, designed to recruit men and boys as key players in the gender equality movement, burst into life in September 2014 with a passionate speech from British actress Emma Watson on the floor of the United Nations in New York City.

The Harry Potter star’s speech has since been seen by millions around the globe, as the HeForShe launch and Watson’s remarks went viral worldwide.

“I have realised that fighting for women’s rights has too often become synonymous with man-hating. If there is one thing I know for certain, it is that this has to stop,” she said at the U.N.

“It is time that we all see gender as a spectrum instead of two sets of opposing ideals… How can we effect change in the world when only half of it is invited or feel welcome to participate in the conversation?”

HeForShe asks men to stand up for women’s rights and gender equality, to address inequality and discrimination faced by women worldwide. The overarching goal is gender equality by 2030.

U.N. Women presented a campaign update to the U.N. on February 9, outlining its accomplishments so far: billions of media impressions; millions of dollars donated; over 200,000 men pledging their support to the movement; and the new “Impact 10x10x10” program to bring on governments, universities and corporations as partners, recently launched at the World Economic Forum in Davos.

“I think it’s attainable, but it’s a question of political will. Will people with power exercise that power? Even though it looks bleak now, I believe women’s equality is coming.” -- Terry O’Neill, President of the National Organisation for Women

“Once men start questioning the dynamics of gender inequality, men take responsibility for changing them, alongside women,” the U.N. Women briefing heard.

Elizabeth Nyamayaro, senior advisor at U.N. Women and head of the HeForShe campaign, called it a “rallying call” and “solidarity movement for gender equality.”

“We need to shift the way things have been done. A new approach was needed, there is a need for men to be part of this dialogue,” she told IPS.

“This is something that can’t just be for women alone to solve. It’s about men recognizing this is their struggle too.”

Just five months old, HeForShe is arguably already one of the most well recognised gender equality campaigns to ever exist, but women’s groups hold mixed opinions on the goals, ideology and value of the movement.

Liesl Gerntholtz, Executive Director of the Women’s Rights Division at Human Rights Watch, told IPS she was concerned that, ironically, men were seemingly being valued more than women in this gender equality campaign.

“The concern is that it is very easy for women’s voices to be usurped. That in shifting the focus to men, you run the risk of making women invisible again,” Gerntholtz said.

“There needs to be a conscious effort to keep women’s voices front and centre of these campaigns.”

She spoke of attending women’s rights conferences and summits where the entire panel of speakers were men, without a single female voice.

“Even in the U.N., with explicit decisions to look for gender parity in a discussion, I’ve been to events and panels that are all men. [HeForShe] might run the risk of replicating these risks of inequality and disempowerment,” Gerntholtz said.

Terry O’Neill, President of the National Organisation for Women, said HeForShe was a good starting point but was not the miracle cure for gender equality.

“The campaign does not address all the aspects of equality that need to be addressed. It simply says, feminism is good for men and for women, and that’s indisputable,” she told IPS.

“I think it’s attainable, but it’s a question of political will. Will people with power exercise that power? Even though it looks bleak now, I believe women’s equality is coming.”

“What are the indicators of gender equality that we are talking about? Is it access to education, participation in government and the corporate sector, a reduction in the number of women experiencing violence? The difficulty in an aim like that is it is very vague,” Gerntholtz said.

“It is important, what we use as markers on the road. It is an ambitious goal.”

When asked by IPS what indicators HeForShe would measure when assessing gender equality, Nyamayaro did not point to any specific examples.

“We’re looking for parity across every single level of society, whether in the home, workplace or community,” she said.

“We’re looking for lasting, concrete change… action from the grassroots, bottom up.”

Nyamayaro pointed out the Impact 10x10x10 project as HeForShe’s next substantial action, where she hoped meaningful change could be accomplished.

A one-year pilot initiative, the project will “engage governments, corporations and universities as instruments of change positioned within some of the communities that most need to address deficiencies in women’s empowerment and gender equality,” according to a release from U.N. Women.

“Each sector will identify approaches for addressing gender inequality, and pilot test the effectiveness of these interventions,” the release continues.

Nyamayaro said 10x10x10 would be a key part of HeForShe’s upcoming agenda, with further plans to be unveiled on International Women’s Day in March and a big one-year anniversary celebration in September.

“A lot needs to be done at the government and corporate level, and in terms of universities, with half the world’s population under 30 and the amount of violence on college campuses, we thought we could really do something there,” she said.

While Gerntholtz made clear her reservations over HeForShe, she said she generally supported the campaign’s goals.

“The women’s movement has been moving towards understanding that we need to include men and boys in the solution. We can’t just see them as perpetrators of violence, but as partners in eradicating violence,” she said.

“Using Emma Watson helps popularise feminism and makes it a legitimate choice for young men. It’s important she reaches the next generation, who will hopefully take leadership roles.”

O’Neill said the National Organisation for Women looked forward to tracking the progress of HeForShe.

“It’s really all hands on deck. We need all the help we can get,” she said.

“We need the U.N. to be loud and strong for women’s equality. HeForShe is one part of what’s needed, but it isn’t the be all and end all.”