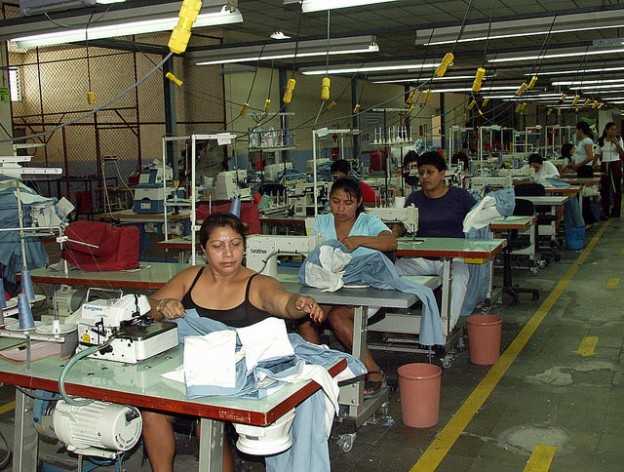 Factory workers make sportswear for a U.S. brand at a maquila plant in the San Bartolo free trade zone in the city of Ilopango in eastern El Salvador. The factory employs 350 workers on each eight-hour shift, 80 percent of them women, who earn minimum wage. Credit: Edgar Romero/IPS

SAN SALVADOR, Mar 23 2015 (IPS) - Textile companies that make clothing for transnational brands in El Salvador are accused of forging alliances with gang members to make death threats against workers and break up their unions, according to employees who talked to IPS and to international organisations.

Workers at maquila or maquiladora plants – which import materials and equipment duty-free for assembly or manufacturing for re-export – speaking on condition of anonymity said that since 2012 the threats have escalated, as part of the generalised climate of violence in this Central American country.

“They would call me on the phone and tell me to quit the union, to stop being a trouble-maker,” one worker at the LD El Salvador company in the San Marcos free trade zone, a complex of factories to the south of the Salvadoran capital, told IPS.

She has worked as a sewing machine operator since 2004 and belongs to the Sindicato de la Industria Textil Salvadoreña (SITS) textile industry union. Some 780 people work for LD El Salvador, a Korean company that produces garments for the firms Náutica and Walmart.

“They told me they were homeboys (gang members) and that if I didn’t quit the union my body would show up hanging from one of the trees outside the company,” she said.

“They would call me on the phone and tell me to quit the union, to stop being a trouble-maker. They said they were homeboys (gang members) and that if I didn’t quit the union my body would show up hanging from one of the trees outside the company,” -- A worker at the LD El Salvador company

She added that LD executives hired gang members to make sure the threats directly reached the workers who belong to SITS, on the factory premises.

The warnings have had a chilling effect, because only 60 of the 155 workers affiliated with the union are still members, she said. Many quit, scared of falling victim to the young gangs, organised crime groups known in Central America as “maras”, which are responsible for a large part of the murders every day in this impoverished country.

“They would call me and say my body would be found in a black bag if I didn’t leave the union….since these were the first calls that we were receiving, I was really nervous and worried,” another worker who is still in SITS told IPS.

The textile maquiladora plants operate in the country’s 17 free trade zones, where companies are given tax breaks and other incentives, and do not pay tariffs on imported inputs. The clients are international brands like Nike, Puma or Adidas.

In 2014, the industry employed over 74,000 people, the great majority of them women, who represent 12 percent of the 636,000 jobs in the private sector. Its exports amounted to 2.4 billion dollars, half of El Salvador’s total sales abroad, according to industry statistics.

Since the maquiladora boom began in the 1990s, the factories have been criticised for inhumane treatment and violations of the labour rights of workers.

“One of the most widely violated rights is the right to unionise,” the secretary of organisation of the Federación Sindical de El Salvador trade union federation, Reynaldo Ortiz, told IPS.

“And now they’re using death threats to try to break up the unions,” he said.

The report cited specific cases of intimidation of trade unionists by gang members.

“These threats pose particular concern and have an especially chilling effect on freedom of association, both because of the country’s long history of murders of union activists and because Salvadoran society generally is plagued by gang violence,” says the 46-page document.

According to the report, several incidents occurred in January 2013 to workers at F&D, a company from Taiwan, which is also in the San Marcos free trade zone.

On one occasion two F&D managers, accompanied by a gang member, approached a number of workers who were talking outside the factory and visibly identified to the gang member the employees who were union leaders.

One of the LD workers said the participation of the maras is so blatant that during a November 2013 meeting of trade unionists with gang members, held to explain the workers’ struggles and problems, some of the gang members showed up with company managers.

In January 2014 Juan Carlos Sánchez, one of the employees who took part in that meeting, was killed in murky circumstances, the LD worker said.

She added that although they filed reports with the attorney general’s office, the investigation went nowhere.

IPS was unable to obtain comments from representatives of F&D or LD with regard to these issues. Nor did anyone at the Labour Ministry respond to requests for interviews on the matter.

Another case of threats involved activists with the Sindicato de Trabajadores y Trabajadoras, Sastres, Costureras y Similares (Sitrasacosi) textile workers union, active in companies that include the Nemtex textile plant on the west side of San Salvador.

“Armed men would wait in cars outside the factory when people were going off shift; they never said anything, it was more like intimidation, psychological pressure,” said a member of the union.

She said that in February a leader of the union, who works in Nemtex, received death threats from gang members who visited his home. In late February he fled to the United States.

The Sitrasacosi activist said the management and business owners dislike the unions and are trying to avoid collective bargaining agreements.

She said the Sindicato de Trabajadores de la Empresa Confecciones Gama, another textile workers union, had been negotiating a collective bargaining agreement with the company, which would have been the first reached in the maquila textile industry.

But the company suddenly shut down in June 2011, leaving more than 270 workers without jobs.

“They preferred to close the factory rather than sign a collective bargaining agreement…in their view it would have set a bad precedent,” the Sitrasacosi member added.

She said that thanks to the efforts of the International Union League for Brand Responsibility, which lobbies for the labour rights of workers who make products for multinational brands around the world, in December 2012 the owners of Gama paid indemnification for the closure.

For example, there are companies that keep the social security payments they dock from the workers’ pay – a phenomenon that continues to occur, she said, although on a smaller scale than in years past.

Forced labour is also widespread in the maquilas, added Urquilla, where the women have to work 12 hours a day to meet the high production targets set for them.

They are not paid for the extra hours they work, but merely receive a 10-dollar bonus for meeting their target, she said. Minimum wage in the maquila textile plants is 210 dollars a month.

“It’s heavy work, a lot of women suffer disabilities for life, because of skeletal and muscle injuries in the shoulders or legs; some people can’t even dress themselves on their own,” Urquilla said.

A maquila worker who asked that the company she works for not be named told IPS that her target is 1,110 pairs of shirt sleeves in 10 hours.