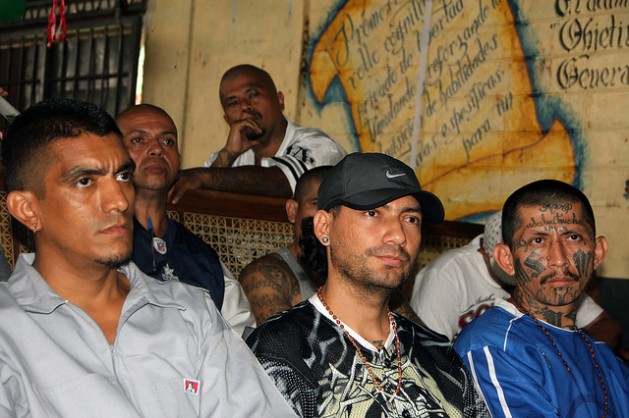 SAN SALVADOR, May 10 2014 (IPS) - When left-wing president-elect Salvador Sánchez Cerén takes office in El Salvador on Jun. 1, he will find big cracks in the truce between street gangs brokered by the outgoing administration, which has brought crime rates down in the past two years.

The peace agreement is facing its most critical challenge since it was reached in March 2012, and is faltering but has not been broken – at least not yet.

“As the dialogue breaks down, violence is rising, and the new authorities will have to take a decision to make sure that the peace process among gangs continues,” one of the brokers of the treaty, Raúl Mijango, told IPS. The other broker of the talks was Catholic Bishop Fabio Colindres.

Sánchez Cerén, a leader of the rebel group-turned political party Farabundo Martí National Liberation Front (FMLN), which has been in power since 2009, has not addressed the recent increase in violent crime. Nor have the other members of his team.

The president-elect was vice president in the outgoing government of Mauricio Funes.

But during the election campaign that ended in Sánchez Cerén’s Mar. 9 victory, the then candidate said he would tackle the problem with what he called a “mano inteligente” – as opposed to a “mano dura” (iron fist) – approach to crime; in other words, an “intelligent” mix of crime prevention and security policies.

Until Funes became president in 2009, the anti-crime strategy followed was based on a “mano dura” approach under the governments of the right-wing Nationalist Republican Alliance (ARENA), which had governed the country since 1989.

The new government is under pressure to bring down the murder rate, not only because it is one of the main demands of the population, but also because this year marks the start of the election campaign for the 2015 municipal and legislative elections.

The peace deal signed two years ago by the two main gangs in El Salvador, the Mara Salvatrucha and Barrio 18, involves a non-aggression pact between them as well as a commitment to call off all attacks on civilians, the police and the military.

The government, meanwhile, agreed to transfer a number of leaders of the two gangs from maximum-security prisons to others with benefits like family visits.

But since February of this year, the rate has been rising again, to the current average of around 10 murders a day.

According to police statistics, which have been questioned from some quarters, over 50 percent of all murders in El Salvador are gang-related and 35 percent of the victims are gang members.

There are an estimated 60,000 gang members in this impoverished Central American country of 6.2 million people.

Mijango said the truce began to unravel when the Justice Ministry, during the presidential election campaign, pulled the government out of its role as “facilitator” of the truce, which had enabled the gang leaders to communicate with their followers outside the prisons, and to hand them instructions.

According to political analysts, these measures were aimed at showing that the government was tough on crime, for electoral purposes, after the Funes administration helped bring about the peace deal between the gangs.

The outgoing government argues that the rise in violent crime is due to a turf war in a number of areas between the two factions of Barrio 18: the Sureños and the Revolucionarios.

Funes himself said on a radio programme that the truce had practically fallen apart, while Justice and Security Minister Ricardo Perdomo revealed that the gangs now have high-powered firearms and can outgun the police.

Indeed, the police have not done well in clashes with the gangs.

On Apr. 6, for example, in the town of Quezaltepeque in the central department of La Libertad, one police officer was killed and three were wounded during an attack by gang members.

But the major Salvadoran gangs deny that the pact is dead or that there are internal power struggles like the ones mentioned by Funes and members of his administration.

“Despites the attacks it has received, the truce is still in place,” says a communiqué published on Apr. 29, signed by the leaders of the Mara Salvatrucha (MS), the two factions of Barrio 18, and the Mao Mao, La Máquina and Miradas Locos 13 gangs.

The statement was read out at a clandestine conference in San Salvador to which only four media outlets were invited, including IPS. National spokesmen for the MS and the two Barrio 18 factions – the Sureños and the Revolucionarios – participated in the conference. All three asked to remain anonymous for security reasons.

“Do you think that if our two factions were at war, we would be here now, together?” asked the representative of the Sureños.

The spokesmen acknowledged, however, that the truce is not perfect, and that there are “clicas” or “cliques” that are not respecting the guidelines handed down by the gang leaders.

For that reason, they neither denied nor confirmed that gang members took part in the attack on Quezaltepeque.

But they admitted that there is a conflict with a clica that broke off from the
Revolucionarios in Zacatecoluca, a town in the central department of La Paz, which is apparently provoking unusually high levels of violence in the area.

However, the dispute, which is local in nature, doesn’t explain the rise in murders at a national level, they said.

“We have kept our commitment to society,” said the MS spokesman.

But Catholic priest Antonio Rodríguez, who has been involved in the social reinsertion of gang members in Mejicanos, a poor neighbourhood on the north side of San Salvador, told IPS that the communiqué read out by the three spokesmen did not represent the national leadership of the gangs.

“The Sureños are angry about that statement because it is not representative,” said the priest, pointing to the cracks in the peace agreement.

Rodríguez was initially an outspoken critic of the truce, but later gave it his support, alongside Mijango and Colindres, before he distanced himself once again.

Now the priest, who belongs to the Congregación Pasionista, has joined the effort driven by Minister Perdomo to relaunch the peace process among the gangs, with the participation of the assistant bishop of San Salvador, Gregorio Rosa Chávez, and representatives of evangelical churches and the United Nations Development Programme, among others.

“It’s a civil society pact, not an agreement among gangs,” Rodríguez told IPS.

In the clandestine conference, the gang leaders said clearly that “There is talk about the existence of two peace processes; we only recognise the one that started in March 2012.”