Pregnancy and Childbirth Still Kill Too Many Women in Latin America 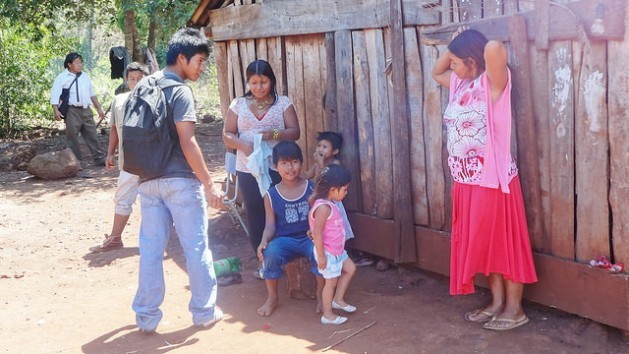 A grandmother with her daughter - a young mother - and other members of their family in Mbya Guaraní Iboty Ocara, an indigenous village in the province of Misiones in the northwest of Argentina. Indigenous people are among the most vulnerable groups in Latin America in terms of maternal mortality. Credit: Fabiana Frayssinet/IPS

BUENOS AIRES, May 14 2015 (IPS) - In spite of strides in social progress, Latin America’s maternal mortality rates remain unacceptable, and many of the deaths are avoidable, occurring partly because of neglect of the prescriptions provided by experts: preventive action and health promotion.

Juan Reichenbach, a regionally renowned Argentine expert on maternal and child health, has hands-on experience of the problem with mothers and their infants, as a paediatrician and the national director of Motherhood and Infancy (2008-2009).

“If I had to formulate a simple maxim, I would say: Tell me where you were born and I’ll tell you whether or not you will survive,” he said in an interview with IPS.

“The main agents of change are prevention and promotion,” said Reichenbach, who is now a professor at Universidad Nacional de La Plata, where he is chief resident and supervises junior resident doctors at a children’s hospital.

“When you look at the basic causes of maternal deaths you don’t have to be highly intelligent to see that they are related to lack of access (to the health system) and to abortions, which are the main cause of maternal deaths in Argentina and in Latin America." -- Juan Reichenbach

“In other words, the health of mothers and their children needs to be treated as a fundamental right,” he said.

“Trends in Maternal Mortality: 1990-2013,” a United Nations report published in 2014, revealed that the maternal mortality rate fell by 40 percent in Latin America over the stated period.

In spite of this drop in the maternal mortality rate, 9,300 women lost their lives in the region in 2013 due to complications of pregnancy and childbirth, the report said.

On average, approximately 16 women die every day in Latin America and the Caribbean from maternity-related complications, according to April 2015 figures from the Pan-American Health Organisation (PAHO).

“When you look at the basic causes of maternal deaths you don’t have to be highly intelligent to see that they are related to lack of access (to the health system) and to abortions, which are the main cause of maternal deaths in Argentina and in Latin America,” Reichenbach said.

According to Bremen De Mucio, of PAHO’s Latin American Centre for Perinatology, Women and Reproductive Health (CLAP), “relevant and valuable” progress has been made, but the maternal mortality ratio remains at an “unacceptable” level.

The fifth Millennium Development Goal (MDG) for improving maternal health calls for reducing the 1990 maternal mortality ratio by three-quarters by the end of 2015, as well as providing universal access to reproductive health.

“Continuing to promote human development is the key. And this goes beyond the health sector alone. Effective work to improve the social determinants of health has more impact than isolated health interventions,” De Mucio told IPS.

Reichenbach, for his part, said: “We will only make progress towards achieving the MDGs by educating people about human dignity and the right to life, which are not quantifiable aims.”

The main risk factors for maternal fatalities in Latin America could be reduced “almost to zero,” according to De Mucio. These risk factors are hypertensive disorders of pregnancy, haemorrhage and infections.

According to PAHO, complications of pregnancy and childbirth are the main cause of death among women aged 20 to 34, and half of all maternal deaths are due to unsafe abortions, in a region where voluntary termination of pregnancy is illegal in the majority of countries.

“About 700,000 babies are born every year in Argentina, and there are an estimated 500,000 abortions. The number of abortions goes unrecognised and unexamined by the health system, and is the tip of the iceberg of maternal mortality,” Reichenbach said.

He said that 35 percent of maternal deaths in his country are preventable with, for instance, proper monitoring during pregnancy.

• The highest maternal mortality rate occurs in Haiti, with 380 deaths per 100,000 live births.

Source: Trends in Maternal Mortality: 1990-2013. Estimates by WHO, UNICEF, UNFPA, The World Bank and the United Nations Population Division.

Argentina’s national guidelines stipulate at least five health clinic check-ups for low-risk pregnancies, but in practice expectant mothers attend on average “less than 2.5 times, and the first visit is usually delayed. Some women arrive at a public hospital in a critical state when they are seven months pregnant,” Reichenbach said.

“Buying a computerised tomography scanner is not the solution; the real answer lies in adequate living conditions, education, employment, decent housing and access to health services,” he said. “Large maternity hospitals generally only intervene as a last resort to fix things after they have gone seriously wrong.”

In his view, the key is to take action at the primary level of health care, including providing an adequate sanitary environment and inclusion in a health system “that pays attention to patients’ daily problems,” reaches remote locations and conducts door-to-door visits in high-risk areas.

Serious cases should be detected promptly and referred to maternity facilities with essential obstetric and neonatal equipment, such as an operating theatre, blood bank, cardiopulmonary resuscitation apparatus and ambulances equipped to deliver emergency care.

Inter-disciplinary teams are needed where doctors are “just another member of the team,” alongside obstetricians, nurses, social workers and community health workers whose work is “much more closely linked to the local area and to people’s health,” he said.

Reichenbach said an “equitable” distribution of doctors is essential to serve marginalised populations, like indigenous peoples, who are “in the first ranks of the dispossessed,” and intra-regional migrants.

In Argentina, for example, there is one doctor per 80 inhabitants in Buenos Aires, while there is only one per 3,000 people in El Impenetrable, a vast forested region in the northern province of Chaco.

“If health is viewed as a right, it follows that every child, mother, teenager and elderly person – including the most impoverished – must be healthy, and that is not so difficult to achieve,” he said.

Health policies should address issues such as geographical remoteness, lack of infrastructure and cultural factors that prevent the spread of sexual and reproductive education.

“We are talking about pregnancy, but we also have to look at whether the pregnancy is wanted within the family, or whether it is an accident, caused by lack of information or by cultural factors, so that a 30-year-old mother ends up having seven or eight children,” he said.

Ariel Karolinski, a consultant for PAHO in Argentina, told IPS that for the past 20 years “the maternal mortality ratio has remained constant at about 40 per 100,000 live births,” although there are wide internal disparities.

However, between 2010 and 2012, for the first time Argentina achieved a fall in the maternal mortality rate with a “relative reduction of 22 percent,” he said.

Karolinski attributed this to programmes like Plan Nacer and Sumar, which expanded public health coverage for mothers and children and targeted the provinces with the worst health indicators, and to cash transfer schemes for pregnant women that are conditional on attending for prenatal check-ups and getting their children vaccinated.

Within Latin America, similar policies have allowed countries like Bolivia, Peru and Uruguay to reduce their maternal mortality rates by over 60 percent.

De Mucio stressed that in Bolivia and Peru there were “favourable repercussions from a pluricultural focus applied during pregnancy, childbirth and the postpartum period.” In Peru, additionally, large numbers of maternity waiting homes for women living far away from health centres have been set up.

Meanwhile, in Uruguay, changes in “the law on abortion (available up to the 12th week of gestation since 2012) have contributed to virtually eradicating deaths from this cause,” he said.

However, “it should not be forgotten that the economic boom” has contributed to improving living conditions, a change which is “directly related to the reduction of maternal mortality,” he concluded.