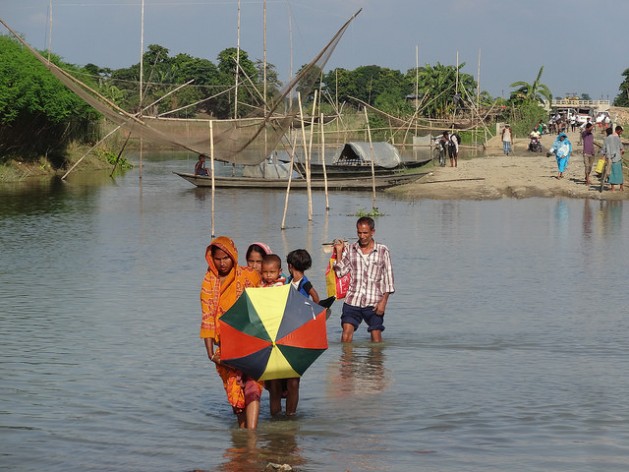 Floods in Morigaon, India submerged about 45 roads in October 2014. Most people wade through the water, believing this is quicker than waiting for a rickety boat to transport them across. Credit: Priyanka Borpujari/IPS

UNITED NATIONS, Jun 9 2015 (IPS) - As the United Nations continues its negotiations to both define and refine a new set of Sustainable Development Goals (SDGs) before a summit meeting of world leaders in September, Secretary-General Ban Ki-moon has expressed support for a new “International Decade for Water for Sustainable Development.”

“It would complement and support the achievement of the proposed Sustainable Development Goals – for water,” he said.

“A dedicated Sustainable Development Goal, explicitly addressing the multifaceted nature of water - as a social issue, an economic issue, an environmental issue, as well as the main cause of disasters on our planet – is an imperative." -- Torgny Holmgren

The proposal for a new International Decade, which has to be eventually approved by the 193-member General Assembly, was initiated Tuesday by the president of Tajikistan, Emomali Rahmon, at a ‘Water for Life” high-level international conference in the capital of Dushanbe.

Tajikistan, which has taken a leading role in highlighting the significance of water as a source of life, also sponsored the International Decade of Water For Life (2005-2015) “to raise awareness and galvanize action.”

The proposed new International Decade will be a successor to Water for Life which concludes in December this year.

“Water, like other areas of the post-2015 development agenda, is intricately interconnected with other challenges,” he noted.

John Garrett, senior policy analyst of development finance at the London-based WaterAid, told IPS: “We at WaterAid are glad to see U.N. Secretary-General Ban Ki-moon highlighting in Tajikistan the human right to water and sanitation, and the enormous need that still exists for these essential services among the world’s poorest and most marginalised populations.”

The new SDGs, he pointed out, represent a once-in-a-generation chance to reach everyone, everywhere with clean water, decent toilets and a way to keep themselves and their surroundings clean.

“A new decade for action on Water for Sustainable Development would continue a much-needed focus on the enormous challenges ahead,” he said.

However, he cautioned, the action should also focus on sanitation and hygiene, because without these, clean water is neither achievable nor sustainable, and neither are the health benefits nor economic progress that results.

Over the years, the United Nations has continued to place water-related issues on its socio-economic agenda: the first-ever International Year of Water Cooperation; World Water Day commemorated every year on Mar. 22; and the annual World Toilet Day on Nov. 19.

In the course of one generation, 2.3 billion people – one-third of humanity – have gained access to an improved drinking water source.

The United Nations General Assembly declared access to clean drinking water and safe sanitation to be a human right, he pointed out.

It is clear that the global community increasingly realises the challenges caused by growing water stress and unwise water management, he added.

“A dedicated Sustainable Development Goal, explicitly addressing the multifaceted nature of water – as a social issue, an economic issue, an environmental issue, as well as the main cause of disasters on our planet – is an imperative, but by no means sufficient, step towards the world we want.”

It is therefore particularly inspiring, he said, to see Ban’s encouragement for a process beyond the SDGs – “a process that allows and requires the involvement of all sectors and actors, public and private, individuals and organisations to collectively take a giant leap towards a water wise world.”

Garrett of WaterAid told IPS progress in the next decade will be critical and “we welcome efforts to keep these issues in the spotlight”.

The Millennium Development Goals succeeded in halving the number of people in the world without improved water, but left many of those most in need without.

Sanitation is among the most off-track of those goals. “We must refocus efforts in the next decade to ensure no one is left behind.”

Ban said sanitation has also made progress during the Decade, with more than 1.9 billion people gaining access to improved sanitation.

Even today, in the 21st century, nearly 1,000 children under the age of five are killed each day by a toxic mix of unsafe drinking water, poor sanitation and hygiene, he said.

Just 10 years from now, 1.8 billion people will live in areas with absolute water scarcity, and two out of three people around the world could live under water-stressed conditions.

“It is little wonder that many global experts have called the ‘water crisis’ one of the greatest global risks that we face,” warned Ban.