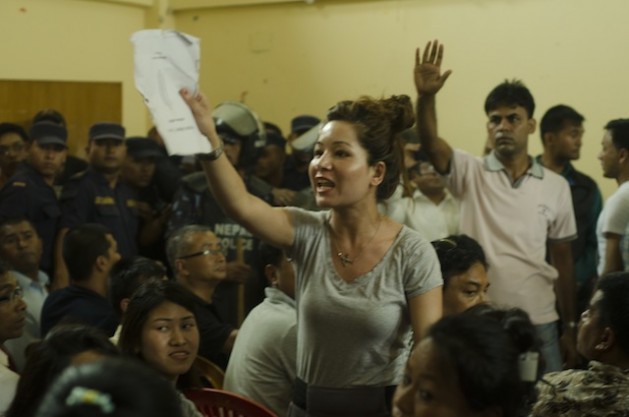 Women activists who say they played a key role in the country’s democratic turn in 2006 are up in arms over a new draft constitution that threatens to deepen gender inequality. Credit: Post Bahadur Basnet/IPS

It marked the first time since the end of the Maoist insurgency and regime change in 2006 that the parties had reached such an important agreement on constitution drafting.

“We want powerful, autonomous provinces. If the federal government retains most of the powers, there is no meaning of federating the country. That’s why we cannot accept this draft." -- Anil Kumar Jha, a leader of the Nepal Sadbhawana Party (NSP) that champions the rights of the Madheshi ethnic group
The CA prepared a preliminary draft based on the 16-point deal, and is currently seeking public feedback on the draft.

But numerous identity groups have challenged the draft, which was prepared by those parties that hold roughly 90 percent of seats in the 601-member CA.

The groups say the draft fails to address their demands of identity and inclusion.

A series of public hearings on the draft last week triggered violent protests in some parts of the country and many groups even burnt its copies.

With opposition groups taking to the streets, the major parties are likely to face a tough time in promulgating the constitution by mid-August.

There are four constituencies – ethnic groups, women, Dalits, and Hindu nationalists – that have put up stiff resistance to the CA move to promulgate a new constitution without bringing them onboard.

The draft states that the country would be federated by the parliament as per the recommendation of a soon-to-be-formed panel of experts.

But activists who have been vociferously demanding federalism say this is a major flaw in the draft.

“The draft defers the issue of federalism, violating the interim constitution. They are deferring the issue because they are reluctant to federate the country,” says Anil Kumar Jha, a leader of the Nepal Sadbhawana Party (NSP) that champions the rights of the Madheshi ethnic group from the country’s southern plains.

They say that political parties, dominated by Hindu high-caste males, are not interested in federalism and sharing powers with ethnic groups.

“We want powerful, autonomous provinces. If the federal government retains most of the powers, there is no meaning of federating the country. That’s why we cannot accept this draft,” Jha says.

Activists from the major ethnic groups want the CA to federate the country along ethnic lines. But such a move is not that easy as Nepal is home to more than 125 ethnic groups and most of the regions have mixed populations.

The major parties are deferring the issue in the hope that the passion for ethnic federalism will subside slowly and will enable them to work out a compromise formula for federalism.

Some of the ethnic groups have been marginalised since the formation of the Nepali state in the late 18th century and they see their liberation through the formation of autonomous provinces in their traditional homelands.

The Nepali state promoted the Nepali language, Hinduism and hill culture as an assimilation policy during the state formation process, which led to the domination of Hindu caste people.

For example, hill high-caste people, who make up 30.5 percent of the population, occupy 61.5 percent of jobs in the national bureaucracy, according to the Multidimensional Social Inclusion Index prepared by the Department of Sociology and Anthropology at the state-run Tribhuvan University in Nepal.

Nepal adopted an inclusion policy after the regime change in 2006, but the ethnic groups want autonomy with the right to self-determination to promote their language, culture and economic rights.

Women activists, on the other hand, are opposed to the draft on the basis that the citizenship provisions contained therein are discriminatory and fail to honor them as ‘equal citizens’.

The draft states that ‘citizenship by birth’ will be granted only to those people whose fathers and mothers are Nepali citizens.

Similarly, children born of Nepali mothers and foreign fathers will not get citizenship by birth unless the father is also a Nepali citizen by the time the children reach the legal age for citizenship (16 years).

So the activists want to change the provision into ‘father or mother’.

“It’s against the universal democratic norms. It [the draft] plans to make women dependent on males for citizenship of their children,” says Sapana Malla Pradhan, a women’s rights activist and lawyer.

In Nepal there are a significant number of people brought up by single mothers who have been struggling hard to get citizenship because the fathers have been out of contact or don’t acknowledge paternity.

“The provision is against the mandate of the people’s movement that led to regime change in 2006. Women participated in the movement enthusiastically because they wanted to become equal citizens,” Pradhan adds.

Women make up over half of the country’s population of 27.8 million people. The female literacy rate stands at 57.4 percent only, compared to 75 percent for men.

Less than 25 percent of women own land, according to the Multidimensional Social Inclusion Index. Far fewer women work for Nepal’s civil service than men – only one in seven bureaucrats is female.

Women’s political participation is very low. The interim constitution of Nepal ensures 33 percent representation for women in the national bureaucracy and legislatures, but the numbers are still grim. The good news is that the news draft has given continuity to this provision.

Similarly, Dalit activists say the new draft curtails their representation in the federal and provincial legislatures, among other things.

“The previous CA had agreed to give three percent [of proportional representation] and five percent extra seats to Dalits in federal and provincial legislatures respectively – in addition to their proportional representation in these bodies – as compensation for the centuries-old discriminatory state practices against Dalits. So we are against the draft,” says Min Bishwakarma, a CA member from the Dalit community.

A total of 43.63 percent of hill Dalits, who make up 8.7 percent of the total population, are below the poverty line, according to the National Living Standard Survey conducted in 2011.

Similarly 38.16 percent of Dalits in the southern plains, who make up 5.6 percent of the population, are below the poverty line. According to the survey, Dalit land holdings are small, and landlessness among Dalits is extreme – 36.7 Dalits in the hills and 41.4 percent Dalits in the plans are landless.

The most serious challenge to the draft however comes from the fourth largest party, the Rashtriya Prajatantra Party-Nepal (RPP-N), which espouses the ideology of Hindu nationalism.

The first CA, which was elected in 2008, was dissolved four years later as none of the parties garnered the required two-thirds majority to draft a constitution.

The major political parties had reached a tentative agreement to promulgate a constitution by mid-August. But the task won’t be easy. They will have to face challenges not only from different identity groups, many of them historically marginalised, but also from the rising tide of Hindu nationalism.