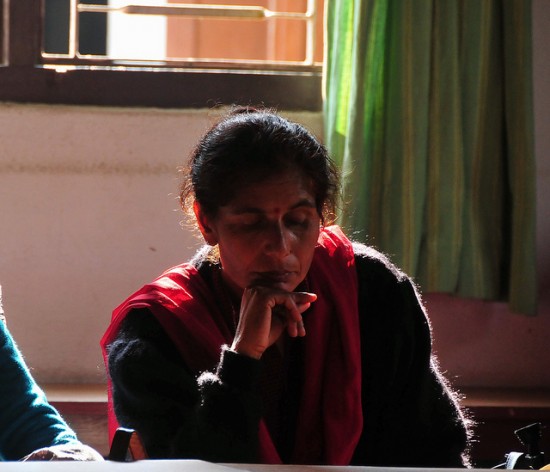 A woman remains pensive during a support group meeting for families of missing persons in the south-eastern Nepali town of Biratnagar. Credit: Amantha Perera/IPS

KATHMANDU, Apr 7 2015 (IPS) - Kali Sunar, 25, a resident of the Dumpada village in the remote Humla District in Far-West Nepal, lives a life that mirrors millions of her contemporaries.

From the minute she rises early in the morning until she finally rests her head at night, this rural woman’s chief concern is how to meet her family’s basic, daily needs.

"Women leaders have to rise above party lines if they really want to make a difference." -- Usha Kala Rai, a leader of the ruling Communist Party of Nepal (Unified Marxist Leninist)
Her small plot of arable land scarcely produces enough food to feed her family of six for three months out of the year. With few other options open to them, her husband and her brother travel to neighbouring India to work as labourers, like scores of others in this landlocked country of 27.5 million people.

“The money they send is not enough because more than half of it is spent on their travel back and forth,” Sunar tells IPS. “If only I could get some kind of work, it would be a huge relief.”

Roughly 23 million people, accounting for 85 percent of Nepal’s population, live in rural areas. Some 7.4 million of them are women of reproductive age. Many are uneducated – the female literacy rate is 57.4 percent, compared to 75 percent for men – and while this represents progress, experts say that until women in Nepal gain equal footing with their male counterparts, the lives of women like Sunar will remain stuck in a rut.

Nepal has signed a string of international treaties that promise gender parity – but many of these pledges have remained confined to the paper on which they were written.

The Convention on the Elimination of All Forms of Discrimination Against Women (CEDAW), which Nepal ratified in 1991, specifies for instance that states parties must take all necessary steps to prevent the exclusion of, or violence towards, women; sadly, this has not been a reality.

According to the Kathmandu-based Violence Against Women (VAW) Hackathon, an initiative to provide support to victims of abuse, gender-based violence is the leading cause of death among Nepali women aged 19 to 44 years – more than war, cancer or car accidents.

Some 75 percent of these girls are under 18; the majority of them are sold into forced prostitution.

Rights activists say that the country also routinely flouts its commitment to eliminate gender discrimination in the workplace, in legal matters, and in numerous other civic, economic and social spheres. 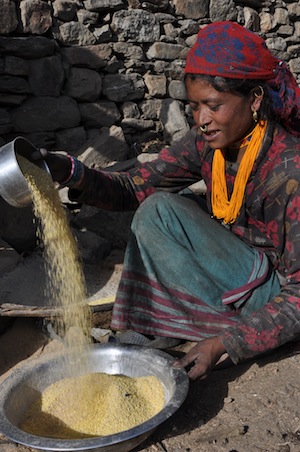 Twenty-five-year-old Kali Sunar barely grows enough on her small plot of arable land to feed her family of six for three months out of the year. Credit: Renu Kshetry/IPS

Not only international treaties but domestic mechanisms, too, have failed to pull the brakes on sex discrimination and gender-based inequities.

A 2007 Interim Constitution, designed to ease Nepal’s transition from a constitutional monarchy to a federal republic, made provisions for women – as well as for other marginalised groups like Dalits (lower caste communities) Adivasis (indigenous and tribal groups), Madhesis (residents of the southern plains) and poor farmers and labourers – to be active political participants based on the principle of proportional inclusive representation.

These were all steps in the right direction, bolstered by the 2008 election of the Constituent Assembly (CA), which saw women occupying 33 percent of all seats in the 601-member parliament.

However, that number fell to 30 percent in the second election, held in 2013, the first after the CA failed to draft a new constitution. With only 11.53 percent of women in the cabinet, experts say there is an urgent need to increase the number of women at the decision-making level.

According to a monitoring report by the non-governmental organisation Saathi, which tracked progress on United Nations Security Council Resolution 1325 (UNSCR 1325) relating to women, peace and security, women’s participation in Nepal’s judiciary stands at an average of 2.3 percent, with 5.6 percent of women in the Supreme Court, 3.7 percent in the appellate courts, none in the special courts and 0.89 in the district courts.

Women’s representation in security agencies is even more worrisome, according to a 2012 study entitled ‘Changes in Nepalese Civil Services after the Adoption of Inclusive Policy and Reform Measures’: there are only 1.6 percent women in Nepal’s army, 3.7 percent in the armed police force and 5.7 percent in the regular police force.

Dismal numbers of female civil servants across a broad spectrum of service groups also spell trouble: women account for just 9.3 percent of civil servants in the education sector, 4.4 percent in the economic planning and statistics division, 4.9 percent in agricultural affairs, 2.2 percent in engineering and two percent in forestry.

Only in the health sector do women come anywhere close to their male counterparts, with 4,887 out of 13,936 positions, roughly 36 percent, occupied by women.

Still, even this number is low, considering the health indicators for women that could be improved by boosting women’s representation at higher levels of politics and government: according to the World Health Organisation (WHO), Nepal has a maternal mortality ratio (MMR) of 190 deaths per 100,000 live births. Only 15 percent of Nepali women have access to healthcare facilities.

Data from Nepal’s Central Bureau of Statistics (CBS) indicate that only 19.71 percent of all families exercise female ownership of land or housing, another reason why women continue to languish on the lowest rung of the social ladder with little ability to exercise their own independence.

Although Nepal’s female labour force participation rate is higher than many of its South Asian neighbours – 80 percent, compared to 36 percent in Bangladesh, 27 percent in India, 32 percent in Sri Lanka and 24 percent in Pakistan, according to the International Labour Oragnisation (ILO) – working women are burdened by social attitudes, which dictate that women undertake domestic labour as well as their other jobs.

“This makes it difficult for women to perform [in their chosen field] and have an impact,” explains Mahalaxmi Aryal, a member of the CA from the Nepali Congress.

Usha Kala Rai, a prominent women’s rights activist and politician, admits that the country has many legal grounds on which to address women’s issues, but says they are seldom utilised to their best effect.

“We completely lack the political will and the commitment to implement these legal provisions,” says Rai, a former member of the Constituent Assembly and leader of the ruling Communist Party of Nepal (Unified Marxist Leninist).

She calls for increased numbers of women in decision-making roles, but acknowledges that those who make it to the top generally come from the elite class, with the added privilege of having received a good education – thus they are not necessarily representative of women across the socio-economic spectrum.

She tells IPS she favours a system of proportional representation for all state bodies on the basis of the female share of Nepal’s population – 52 percent.

“Women leaders have to rise above party lines if they really want to make a difference,” she explains, citing the creation of the 2008 Women’s Caucus, comprised of all 197 women in the Constituent Assembly representing every major political party, to stand together for women’s rights irrespective of ideology.

However, pressure from male leaders meant that the second Constituent Assembly was unable to revive the Caucus, with the result that women no longer have a unified platform on which to voice their collective demands.

“Women politicians have been handpicked by their parties under the proportional representation (PR) [system], which makes them vulnerable to partisan politics,” political science professor Mukta Singh Lama tells IPS.

Until such a system is replaced with one that prioritises genuine inclusion of women at every level of the state, experts fear that Nepal’s women will not have an equal hand in the shaping of this country.