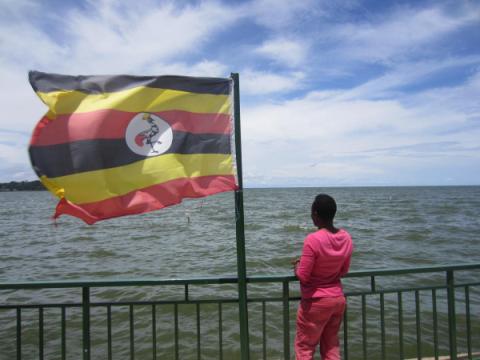 A Ugandan transgender woman in a town near Kampala, shortly before she fled the country. She left to escape the police harassment and violence she experienced after the passage of the Anti-Homosexuality Act. © 2014 Human Rights Watch

NEW YORK, Jul 17 2015 (IPS) - A report published in June by the Academy of Science of South Africa (ASSAf), in collaboration with the Uganda National Academy of Sciences, could help reshape understandings of human sexuality – if African policymakers take the time to consider the report’s findings.

Contrary to widespread belief amongst African lawmakers and ordinary citizens, homosexuality is neither a Western import nor a matter of choice. These are some of the findings the panel of African scientists revealed after reviewing hundreds of studies on same-sex attraction.

But some African politicians seem too busy fomenting panic around homosexuality to pay attention to the facts, by, for example, spreading false claims that U.S. President Barack Obama is pushing same-sex marriage on Kenya and Nigeria.

Desperate to distract voters from real, unresolved problems, such as poverty, insecurity and corruption, many African politicians like to raise the specter of homosexuality as a mortal danger. In the name of protecting society, “traditional values,” or children, they pass deeply discriminatory laws.

Nigeria, under former president Goodluck Jonathan, slapped 10-year prison sentences on anyone who even “indirectly” demonstrates a “same sex amorous relationship.” In Uganda, before its Anti-Homosexuality Act was struck down on procedural grounds last year, a landlord who didn’t evict a gay or lesbian tenant could have been convicted for maintaining a “brothel.”

For the proponents of these laws, Obama is the latest bogeyman, with one Kenyan politician suggesting that if Obama so much as mentions the rights of lesbian, gay, bisexual and transgender people during his upcoming visit to Kenya, this might tear Kenya’s “social fabric.”

But the panel of well-respected African scientists roundly dismissed claims that homosexuality is imported, finding the prevalence of homosexuality in African countries “no different from other countries in the rest of the world”.

The recent report notes that same-sex relationships and diverse gender identities exist even where laws are most repressive, and levels of stigma are highest. Criminalising LGBT identities or same-sex conduct simply won’t make LGBT people disappear.

Likewise, an approach to sexuality and gender that is in line with international human rights law will not open the floodgates to waves of Africans “converting” to homosexuality. Indeed, countries like the Netherlands and Sweden, known to be particularly open to sexual diversity, have no higher rates of homosexuality than any other countries in the world.

The scientists find that “… studies such as this show that young people can be friends with LBGTI youngsters without fearing (or their parents fearing) that they will ‘catch’ same-sex attraction from their friends. Such ‘transmission’ of sexual orientation simply does not happen.”

Nor should policymakers worry that LGBT people are a threat to children. The fear that gays are recruiting and abusing children is often offered to justify cracking down on homosexuality. However, the panel found “no scientific evidence to support the view” that LGBT people are more likely to abuse children than anyone else.

Instead, the panel, having examined studies of child sexual abuse, concluded that “most of the perpetrators are heterosexual men.” Rather than scapegoating homosexuals, the report suggests, governments should identify and hold accountable the real child abusers.

When given an opportunity to speak for themselves, LGBT people often emphasise that they were aware of their sexual or gender identity from an early age. Similarly, heterosexual people often develop romantic feelings toward the opposite sex from early childhood—they don’t “choose” those feelings, nor can they change them.

In examining the scientific literature, the panel says that, “Overall, the surge in recent confirmatory studies,” including those of twins and of similarities in chromosomes across a population group with a particular trait, “have reached the stage where there is no longer any doubt about the existence of a substantial biological basis to sexual orientation.”

If sexuality has a biological basis, the scientists ask – and if there is no evidence that LGBT people “recruit” or otherwise harm children – what could possibly be the justification for punishing people for their sexual orientation or gender identity?

African policymakers should ask themselves the same. And rather than wringing their hands about a US court decision on marriage equality, or tearing their hair out over purely hypothetical comments that Obama may or may not make, they should look at the very real social harms caused by homophobia and transphobia.

The African Commission on Human and People’s Rights – which, like the South African and Ugandan scientists who produced the report, can hardly be dismissed as Western – passed a resolution in 2014 condemning widespread violence on the grounds of real or perceived sexual orientation or gender identity.

The commissioners expressed “alarm” that “acts of violence, discrimination and other human rights violations continue to be committed on individuals in many parts of Africa because of their actual or imputed sexual orientation or gender identity.” They cited “‘corrective’ rape, physical assaults, torture, murder, arbitrary arrests, detentions, extra-judicial killings and executions, forced disappearances, extortion and blackmail.”

The commission calls on African countries to end all violence and abuse on the grounds of sexual orientation and gender identity.

The ASSAf report goes a step further in concluding that “As variation in sexual identities and orientations has always been part of a normal society, there can be no justification for attempts to ‘eliminate’ LGBTI from society.”

As the study shows, same sex attraction and gender variance have always existed and nothing will change that, no matter how many repressive laws are passed, how many LGBT people are raped, murdered, imprisoned, expelled from schools or evicted from their homes.

Instead of trying to “eliminate” LGBT people, why not begin taking steps to eliminate violence and discrimination against them?