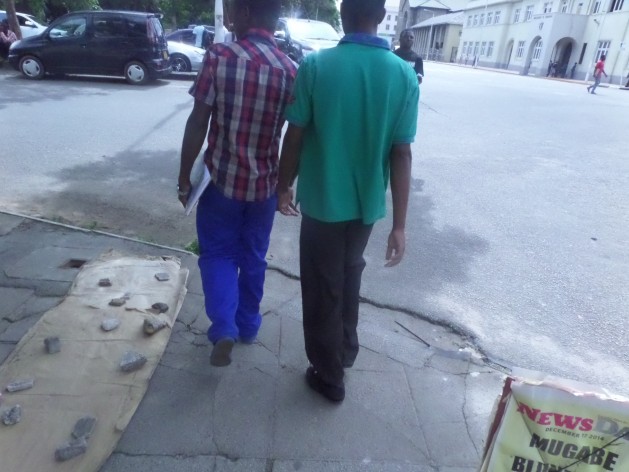 Zimbabwe has criminalised gay relationships, striking fear into the hearts of many gays like these two walking side by side in the country’s capital, because they are being left out in strategies to combat HIV/AIDS. Credit: Jeffrey Moyo

HARARE, Dec 18 2014 (IPS) - Despite a mandate to eradicate HIV/AIDS under the U.N. Millennium Development Goals (MDGs), Zimbabwe has done little or nothing to reduce the rate of infection among vulnerable gays and lesbians, say activists here.

Gays and lesbians activists here say more needs to be done because population groups such as men who have sex with men and transgender people remain at the periphery of the country’s intervention strategies.

“In as far as combatting HIV/AIDS is concerned, there are no national programmes targeted for minority groups or interventions that can easily be accessible by the LGBTI (lesbian, gay, bisexual, transgender and intersex) community on prevention and care within the public healthcare system,”Samuel Matsikure, Programme Manager of Gays and Lesbians of Zimbabwe (GALZ), told IPS.

“Whether the Zimbabwean government likes it or not, it has to face the reality that gays and lesbians exist and should therefore cater for their HIV/AIDS needs in emerging with strategies to combat HIV/AIDS just like it does for all other citizens, for how do we end the scourge if we ignore another group of people who will certainly spread the disease” – civil society activist Trust Mhindo

“There are knowledge gaps of healthcare workers on the needs and best methods on prevention, treatment and care for the HIV-positive LGBTI individuals,” adds Matsikure.

GALZ is a voluntary association founded in 1990 to serve the needs and interests of LGBTI persons in Zimbabwe, pushing for social tolerance of sexual minorities.

But 24 years after GALZ was founded, Zimbabwe’s Sexual Offences Act still criminalises homosexuality. According to Section 4.78 of Zimbabwe’s new constitution, persons of the same sex are prohibited from consensual sex or marrying each other.

Civil society activists say the Zimbabwean government has to accept the reality that gays and lesbians exist.

“Whether the Zimbabwean government likes it or not, it has to face the reality that gays and lesbians exist and should therefore cater for their HIV/AIDS needs in emerging with strategies to combat HIV/AIDS just like it does for all other citizens, for how do we end the scourge if we ignore another group of people who will certainly spread the disease,” Trust Mhindo, a civil society activist, told IPS.

HIV/AIDS activists here rather want the legislation on gays and lesbians changed. “We need to fight for a change of laws so that gays and lesbians are given recognition, without which fighting HIV/AIDS among LGBTI will remain futile,” Benjamin Mazhindu, Chairperson of the Zimbabwe National Network for People Living with HIV (ZNPP+), told IPS.

Globally halting the spread of HIV/AIDS by 2015 is part of the U.N. MDGs, but with members of the LGBTI sidelined in fighting the disease in Zimbabwe, the battle may be far from over.

“If you today walk into any government healthcare centre, be sure not to find any information or literature on gays and lesbians in as far as HIV/AIDS is concerned,” he added.

And for many Zimbabwean gays like 23-year-old Hillary Tembo, living with HIV/AIDS amounts to a death sentence because he fears accessing medical help from government healthcare centres.

“I’m HIV-positive and ridden with STI-related sores in my anus and truly I’m afraid to show this to health workers, fearing victimisation owing to my sexuality,” Tembo told IPS.

But Zimbabwean Health Minister David Parirenyatwa told IPS: “When a person visits a healthcare centre, nothing is asked about one’s sexual orientation.”

According to Samba, although there are no reported cases of HIV-positive LGBTI people being denied antiretroviral treatment on account of their sexual orientation, “there is need for a national HIV/AIDS response to address the barriers preventing members of the LGBTI community from accessing services that address their HIV/AIDS health care needs, including access to information that is relevant to them.”

However, faced with a constitution forbidding gay relations, government here finds it an uphill task to consider a group of people that it constitutionally does not recognise in combatting HIV/AIDS.

“We can’t arm-twist our supreme law which does not condone homosexuality to fit in to the needs of a small group of people who are disobeying the law,” a top government official, speaking on the condition of anonymity, told IPS.

And for gays and lesbians in this Southern African nation, whether the U.N. MDGs matter or not, to them suffering may continue as long as they remain a forgotten lot in fighting HIV/AIDS.

“As homosexuality is illegal in Zimbabwe, it is difficult for prevention programmes to reach men who have sex with men (MSM) and all MSMs living with HIV/AIDS are often unable to access HIV treatment, care and support,” Samba told IPS.

Asked how many HIV-positive LGBTI persons there were in Zimbabwe, the GALZ director said that he could not give figures because “there are no mechanisms at national level to capture data based on one’s sexual orientation.”

According to the National Aids Council in Zimbabwe (NAC),1.24 million people in the country are living with HIV/AIDS, which is approximately 15 percent of the country’s over 13 million people. LGBTI persons are part of this percentage.

Statistics from the Zimbabwe National Statistics Agency this year show that LGBTI persons in Zimbabwe contribute about four percent of the people living with HIV/AIDS.

With a membership of 6,000 gays and lesbians, GALZ says 15 percent of these are living with HIV/AIDS, with five of its members having succumbed to HIV/AIDS since January. The organisation claims that it normally loses 5 to 10 people each year. “Statistics we have so far are of GALZ-affiliated members, not representative of the national statistics,” said the GALZ director.

For many HIV-positive Zimbabwean gays like Tembo, as the world rushes towards the deadline for attainment of the U.N. MDGs, without clearly defined strategies to fight HIV/AIDS within the LGBTI community, the war against the scourge may be far from over.

“How can we triumph over HIV/AIDS when among the LGBTI community we are without strategies from government to combat the disease?” Tembo asked rhetorically.