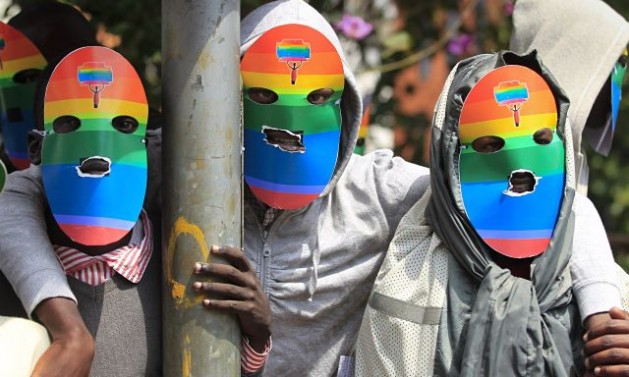 UNITED NATIONS, Sep 9 2014 (IPS) - Eighteen-year-old Gift Makau enjoyed playing and refereeing football games in her neighbourhood in the North West Province of South Africa. She had come out to her parents as a lesbian and had never been heckled by her community, according to her cousin.

On Aug. 15 she was found by her mother in a back alley, where she had been raped, tortured and killed.

“Homophobia becomes both a ruse and a distraction from other real substantive issues, whether those are economic or political.” -- HRW's Graeme Reid

Shehnilla Mohamed, Africa director for the International Gay and Lesbian Human Rights Commission (IGHLRC), said that Gift’s murder was part of a disturbing trend in which gender-nonconforming individuals are targeted for so-called corrective rape.

“Corrective rape is really the attempt of the society to try to punish the person for acting outside the norm,” Mohamed said.

In the past 10 years in South Africa, 31 lesbians have been reported killed as the result of corrective rape, she said.  A charity called Luleki Sizwe estimates that 10 lesbians are raped or gang raped a week in Cape Town alone.

If this is happening in South Africa, the only mainland African country to allow legal same-sex marriage, what is it like to be lesbian, gay, bisexual or transgender (LGBT) elsewhere on the continent?

“The type of brutality that you see happening to lesbians and to homosexuals in parts of Africa is just beyond comprehension,” Mohamed told IPS. “It’s like your worst horror movie, and even worse than that.”

More than two-thirds of African countries have laws criminalising consensual same-sex acts, according to IGLHRC.

Africa is seeing “an intensification of the political use of homophobia,” he said.

Nigeria and Uganda made headlines in early 2014 when they signed anti-homosexuality bills that handed out long prison sentences for being homosexual or for refusing to turn in a known homosexual.

On Aug. 1, Uganda’s law was declared unconstitutional on procedural grounds by its supreme court, but Shehnilla Mohamed expects that it will be back on the table again once international attention shifts away.

Long-time African leaders who wish to extend their stay in office often try to whip up anti-homosexuality sentiment.

“Homophobia becomes both a ruse and a distraction from other real substantive issues, whether those are economic or political,” Graeme Reid said.

Chalwe Mwansa, a Zambian activist and IGHLRC fellow, told IPS that in his country, politicians equate cases of pedophilia and incest with homosexuality, fabricating sensational stories to inflame the public. This strategy diverts attention away from problems with unemployment, poverty, health and education.

Some leaders also claim that homosexuality is an un-African, Western imposition. Mohamed believes it is the exact opposite.

Same-sex relationships did not begin to develop a negative connotation until after colonisation brought Western religion, she said.

In an environment of antipathy, LGBT individuals have few places to turn to for help. The police station is often not a sanctuary for those who have been raped.

Mohamed recently spoke to a transgender man in South Africa who was accosted in the lobby of his block of apartments by a group of men who thought he was a woman. When they found out he was a man they raped and “beat him so badly that he was totally unrecognisable,” she said.

The man ended up contracting HIV/AIDS.

In South Africa, after being raped, a person is supposed to report it to the police and receive a free post-exposure prophylaxis within 72 hours to minimise the risk of transmission. However, this man was too afraid to go into the station, knowing that the police would most likely feel that he had deserved it.

The problem is even worse in countries like Nigeria that have criminalised homosexuality. According to Michael Ighodaro, a fellow at IGLHRC from Nigeria, after its anti-homosexuality bill was passed in January, 90 percent of gay men who were on medications stopped going to clinics to receive them, out of fear that they would be arrested.

Even at home, LGBT individuals in Africa face an uphill struggle. Anti-homosexuality laws do have a current of support throughout society. LGBT people often fear ostracisation by their families, so hide their sexual or gender identity.

The increased prominence of LGBT issues in national debates in Africa in the past decade has inspired a bit of a backlash.

Njeri Gateru, a legal officer at the National Gay and Lesbian Human Rights Commission of Kenya, says that Kenya lies in a tricky balance. Society does not actively persecute LGBT individuals if they outwardly conform to sexual and gender norms, but “problems would arise if people marched in the streets or there was an article in the press.”

“We cannot continue to live in a balance where we are muzzled and we are comfortable being muzzled,” Gateru said at a HRW event in New York.

Religion plays a significant role in the lack of acceptance of gender non-conforming groups in Africa.

IGLHRC’s Mohamed said that even “people with master’s degrees, who are highly educated, who work in white collar jobs will say ‘God does not like this.’”

“I think pointing out that LGBTI people are human beings, are God’s creation just like everybody else is really something that we’ll keep on pushing,” she said.

According to Gateru, even when churches open their doors to LGBT groups, they sometimes do it for the wrong reasons.

A year or so ago, a group of Kenyan evangelical leaders announced that they were going to stop turning LGBT individuals away from churches because, in their words, ‘Jesus came for the sinners, not the righteous.’

The churches are “welcoming you to change you or to pray for you so you can change, which is really not what we want,” said Gateru. “But I think it’s a very tiny step.”

Activist groups welcome the support of prominent religious leaders such as Tutu, and are planning a conference in February to bring together pastors, imams and rabbis to discuss LGBT issues and religion in Africa.

In general, LGBT activist organisations have their work cut out for them.

IGLHRC was founded in 1990, and helps local LGBT advocacy groups around the world fight for their rights through grant making and work on the ground.

“What we really need is to mainstream homosexual rights, LGBTI rights into the basic human rights discourse,” said Mohamed.

During August’s U.S.-Africa summit in Washington, IGLHRC urged the U.S. to hold African leaders to account.

Depending on the country, the U.S. does have an ability to advance human rights through external pressure. Mohamed speculated that the striking down of Uganda’s anti-homosexuality bill just days before the summit was a public relations stunt by Ugandan President Yoweri Museveni, since he wanted a warm reception by the White House.

Nigeria, the other country to introduce a new law in 2014, is more difficult to influence than Uganda, according to Michael Ighodaro. Because of its oil wealth, the Nigerian government would not care if the United States were to pull funding.

The U.S.-African summit, since it was focused on business, offered an opportunity for LGBT advocacy groups to point out the economic costs of sidelining an entire sector of the population.

Mohamed said that LGBT individuals are often “too scared to apply for certain jobs because of how they would be treated. If they did apply they probably would never get the jobs because of the stigmas attached.”

Despite the difficult journey to come, supporters of LGBT rights in Africa can look back to see that some progress has been made.

HRW’s Reid said that the LGBT movement was practically invisible in Africa just 20 years ago.

“In a sense this very vocal reaction against LGBT visibility can also be seen as a measure of the strength and growth of a movement over the last two decades,” he said.

Things may get a little tougher before they get better, Njeri Gateru told IPS, but “history is on our side.”