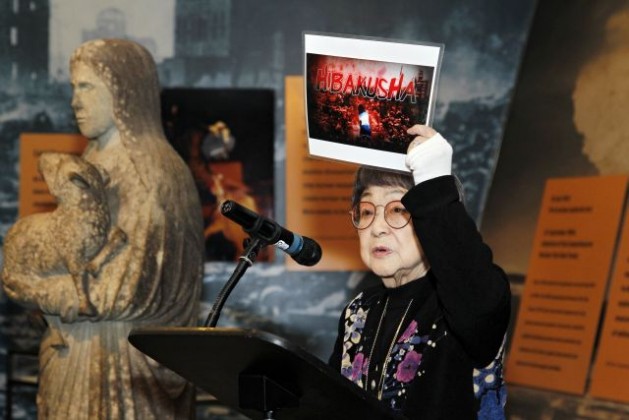 UNITED NATIONS, Aug 6 2015 (IPS) - Speaking at a commemoration of the 70th anniversary of the atomic bombings of Japan, Secretary-General Ban Ki-moon, a vociferous advocate of nuclear disarmament, echoed the rallying cry worldwide: “No more Hiroshimas, No more Nagasakis.”

Providing grim figures, he said more than 200,000 people died of nuclear radiation, shock waves from the blasts, and thermal radiation from the bombing of Hiroshima on Aug. 6, 1945, and of Nagasaki three days later.

Additionally, over 400,000 more people have died – and are continuing to die – since the end of the Second World War from the impacts of the attacks.

“As you keep the memory of the bombing alive, so too, must the international community persist until we have ensured that nuclear weapons are eliminated,” he said Thursday.

Ban said the United Nations, since its establishment 70 years ago, has been seeking to eliminate  weapons of mass destruction (WMDs).

The U.N. General Assembly’s first resolution, adopted in January 1946, set the goal of eliminating all WMDs.

“Until I realise this goal, I will continue to use every opportunity to raise global awareness about the dangers of nuclear weapons and demand an urgent international response,” he vowed.

A Tacit Taboo, But Fragile

That surely is one reason that in the 70 years since then nuclear weapons have not been detonated in war. Some even speak of a “taboo” on use, and a norm does seem to be emerging.

The International Court of Justice and the International Committee of the Red Cross have confirmed that use of nuclear weapons is incompatible with humanitarian law protecting civilians from the effects of warfare.

And while in the end a Final Document was not adopted, at the recently concluded 2015 Nuclear Non-Proliferation Treaty (NPT) Review Conference, all states – including the NPT nuclear weapon states – appeared ready to declare that “it in the interest of humanity and the security of all peoples that nuclear weapons never be used again.”

But the taboo is fragile, as illustrated by the nuclear saber-rattling over Ukraine, and there are other reasons nuclear weapons have not exploded in conflict since 1945.

Among them are war weariness after the general devastation of World War II, the positive role of the United Nations and other international institutions built in the aftermath of that war, and the caution typically but not always induced by the deployment of nuclear weapons.

There is no reason whatever to be complacent. The developing norm of non-use must be codified in a global treaty joined by all states that would prohibit the use of nuclear weapons in any circumstance and provide for their elimination, he said.

Alice Slater, New York director of the Nuclear Age Peace Foundation and who serves on the Coordinating Committee of Abolition 2000, told IPS: “On this fateful day, 70 years ago, the first of the only two atomic bombs ever used was dropped on the city of Hiroshima, with a second catastrophic detonation wreaked on Nagasaki on Aug. 9, killing over 220,000 people by the end of 1945, with many tens of thousands of more dying from radiation poisoning and its lethal after effects over the years.”

Yet despite these horrendous cataclysms in Japan, there are still 16,000 nuclear weapons on the planet, all but 1,000 of them held by the U.S. and Russia, she pointed out.

“Our legal structures to control and eliminate the bomb are in tatters, as the five recognized nuclear weapons states in the Non-Proliferation Treaty (NPT)—the U.S., UK, Russia, France, China–cling to their nuclear deterrents, asserting they are needed for their ‘security’ despite the promises they made in 1970, 45 long years ago, to make good faith efforts to eliminate their nuclear arms,” she added.

This “security” in the form of nuclear “deterrence” is extended by the United States to many more countries in the NATO (North Atlantic Treaty Organisation) nuclear alliances, as well as to the Pacific states of Japan, Australia, and South Korea.

Non-NPT states, India, Pakistan and Israel, as well as North Korea which left the NPT, taking advantage of its Faustian bargain for “peaceful” nuclear power, to make nuclear weapons similarly claim their reliance on nuclear “deterrence” for their security, Slater said.

She said the rest of the world is appalled, not only at the lack of progress to fulfill promises for nuclear disarmament, but the constant modernization and “improvement” of nuclear arsenals with the U.S. announcing a plan to spend one trillion dollars over the next 30 years for two new bomb factories, delivery systems and warheads, having just tested a dummy nuclear bunker-buster warhead last month in Nevada, its B-61-12 nuclear gravity bomb.

In Northern California, peace advocates marked the 70th anniversary at the Livermore Lab, where the U.S. is presently spending billions of dollars to create new and modified nuclear weapons.

The Lawrence Livermore Lab is one of the two national laboratories that have designed every warhead in the U.S. nuclear weapons stockpile.

In a press advisory, the Western States Legal Foundation (WSLF), a longstanding advocate for nuclear disarmament, said 70 years after the U.S. dropped atomic bombs on the people of Hiroshima and Nagasaki, preparations for nuclear war are ongoing at the Livermore Lab.

Over 85 percent of the Fiscal Year 2016 budget request for the Lab is dedicated to Nuclear Weapons Activities.

Scientists at Livermore are developing a modified nuclear warhead for a new long-range stand-off weapon to replace the air-launched cruise missile.

Nearly 16,000 nuclear weapons – 94 percent of them held by the U.S. and Russia – continue to pose an intolerable threat to humanity, she said, pointing out that nuclear weapons have again taken center stage on the borderlands of Europe, one of several potential nuclear flashpoints.

Whether a nuclear exchange is initiated by accident, miscalculation or madness, the radiation and soot will know no boundaries.

The statement also said the U.S. plans to spend a trillion dollars over the next 30 years “modernising” its nuclear bombs, warheads, delivery systems and infrastructure to sustain them for decades to come. The human cost is immeasurable—to our health, environment, ethics, and democracy, to our prospects for global peace, and to our confidence in human survival.

“We gather at Livermore Lab to demand that nuclear weapons spending be slashed and redirected to meet human needs. On this 70th anniversary date, we welcome the Iran deal and call on the U.S. government to now lead a process, with a timetable, to achieve the universal elimination of nuclear weapons.”

Slater told IPS that at the last NPT Review Conference in May, which broke up when the U.S., UK and Canada refused to agree to an Egyptian proposal for a conference on a Middle East Weapons of Mass Destruction Free Zone — made to fulfill a 1995 promise as part of the commitments from the nuclear weapons states for an indefinite extension of the 25 year old NPT — the non- nuclear weapons states took a bold step.

South Africa expressed its outrage at the unacceptable nuclear apartheid apparent in the current “security” system of nuclear haves and have nots—a system holding the whole world hostage to the security doctrine of the few.

In the past two years, after three major conferences with governments and civil society in Norway, Mexico and Austria to examine the catastrophic humanitarian consequences of nuclear war, over 100 nations signed up at the end of the NPT to the Austrian government’s Humanitarian Pledge to identify and pursue effective measures to fill the legal gap for the prohibition and elimination of nuclear weapons.

There are now 113 countries willing to move forward to negotiate a prohibition and ban on nuclear weapons to stigmatise and delegitimise these weapons of horror, just at the world has done for chemical and biological weapons.  See www.icanw.org

Slater said it is hoped that countries harbouring under their nuclear umbrellas will also be pressured by civil society to give up their alliance with the nuclear devil and join the Humanitarian Pledge.

“This August, as we remember and commemorate around the world the horrendous events in Hiroshima and Nagasaki, it’s long past time to ban the bomb!  Let the talks begin.”